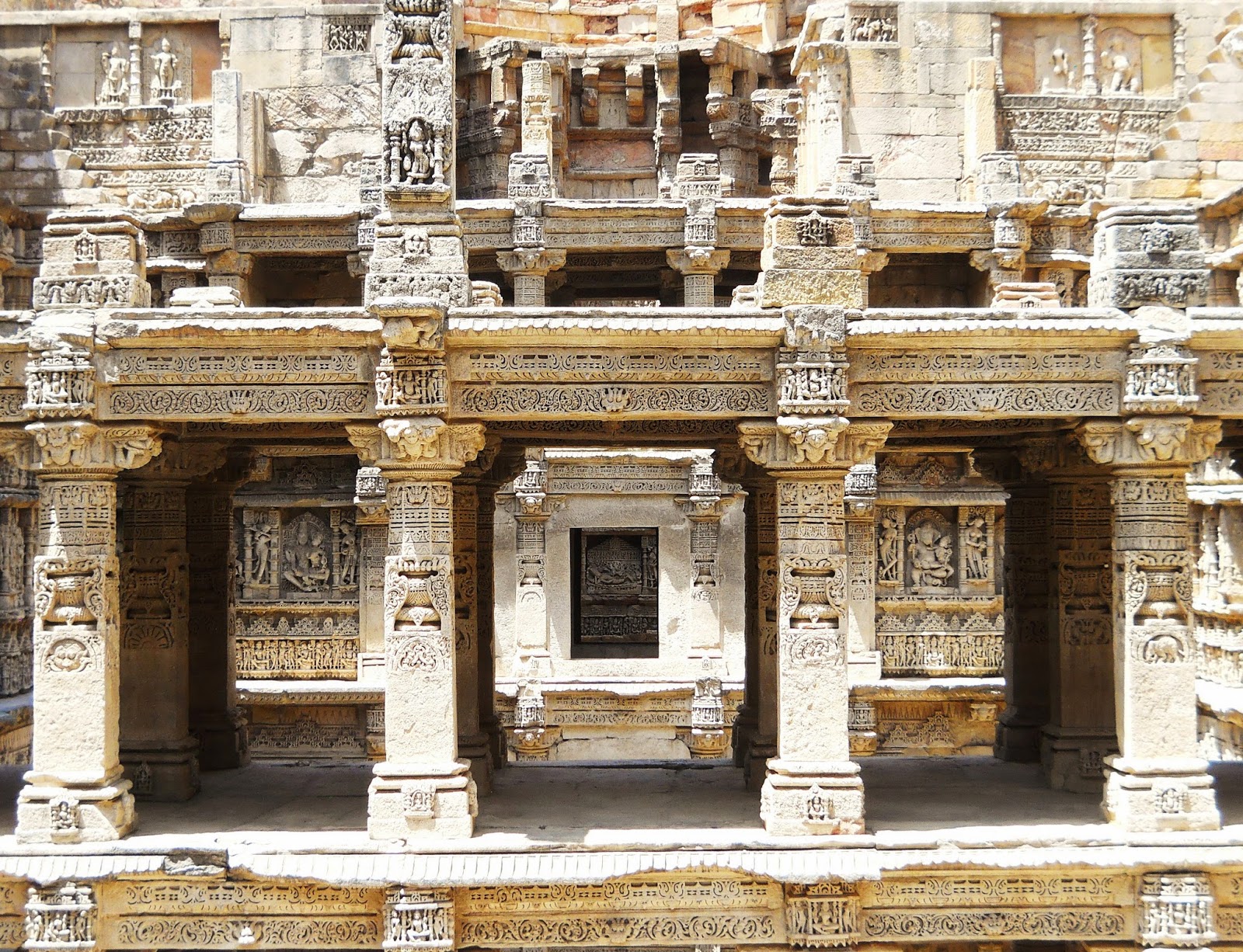 Simply put, Rani ki vav, or "The Queen's Stepwell," in the little northern Gujarati town of Patan, is one of the foremost man made wonders of India. The stepwell is generally thought to have been built by Queen Udayamati of the Solanki dynasty as a memorial for her deceased husband, Bhimadeva I, in the late 11th century. At the time, the Solankis ruled over much of what we now refer to as the state of Gujarat, and their reign is often viewed as a golden age in the history of the region.

While the physical remains from the period are not great in number, the few Solanki buildings which still exist are truly exceptional. Patan, once known as Anhilwara, Anahillapura, Anahillavada, or any one of several other names, was the capital of the Solanki kingdom, though the vast majority of the traces of Solanki rule have long since been swept away, starting in the 13th century when the city was sacked first by Qutbuddin Aibak of the Delhi Sultanate, and then, later in the same century, by his successor on the throne of Delhi, Allauddin Khilji. In the 21st century, there is little in the dusty, unassuming little city, other than the step-well of course, to remind one that Patan was once the center of an empire.

That makes a visit to Rani ki vav all the more startling: In the middle of nowhere, in a city which, though certainly not unfriendly or particularly backwards nonetheless does not feel like it should have ever been at the center of anything, one suddenly comes across one of the most awe-inspiring man made sights in the country. This is in part because the well was far more than a merely functional building. In northwest India, where rainfall is scanty and water tables are deep on account of the regions sandy soil, the building of a step well was viewed as a meritorious act, and the wells themselves as places of worship. It can also be said that the well, like all monuments, was a means by which the Solankis could physically demonstrate their immense wealth and power, something which it certainly does: Even when there are so few remaining physical reminders of the Solankis existence, Rani ki vav all by itself indicates that theirs was an age of incredible artistic prowess.

Rani ki vav is to step wells what the Taj Mahal is to tombs and what Mehrangarh Fort is to fortresses. While there may be larger step wells in India, there aren't many, and those that are don't boast anything approaching the almost hallucinogenic profuseness and technical skill of Rani ki vav's incredible carvings.   Yet, it seems that because stepwells are a relatively obscure form of architecture, Rani ki vav will remain relatively little known well into the foreseeable future (despite the  having having been made into a UNESCO world heritage site just earlier this year.)

For centuries, the well was abandoned, during which time it filled almost entirely with silt. Much of what remained above ground by the 19th century was carted off and used as building materials for other constructions. It wasn't until 1986 that the A.S.I. began the process of excavating and conserving the monument. Given how little care the stepwell has received since the 13th century, it's a wonder that there's anything left at all. Yet, even in its ruinous condition, Rani ki vav projects an incredible opulence, and nearly a thousand years ago, when the building had yet to face the ravages of time and Muslim invaders, it must have been among the very grandest sights in India. 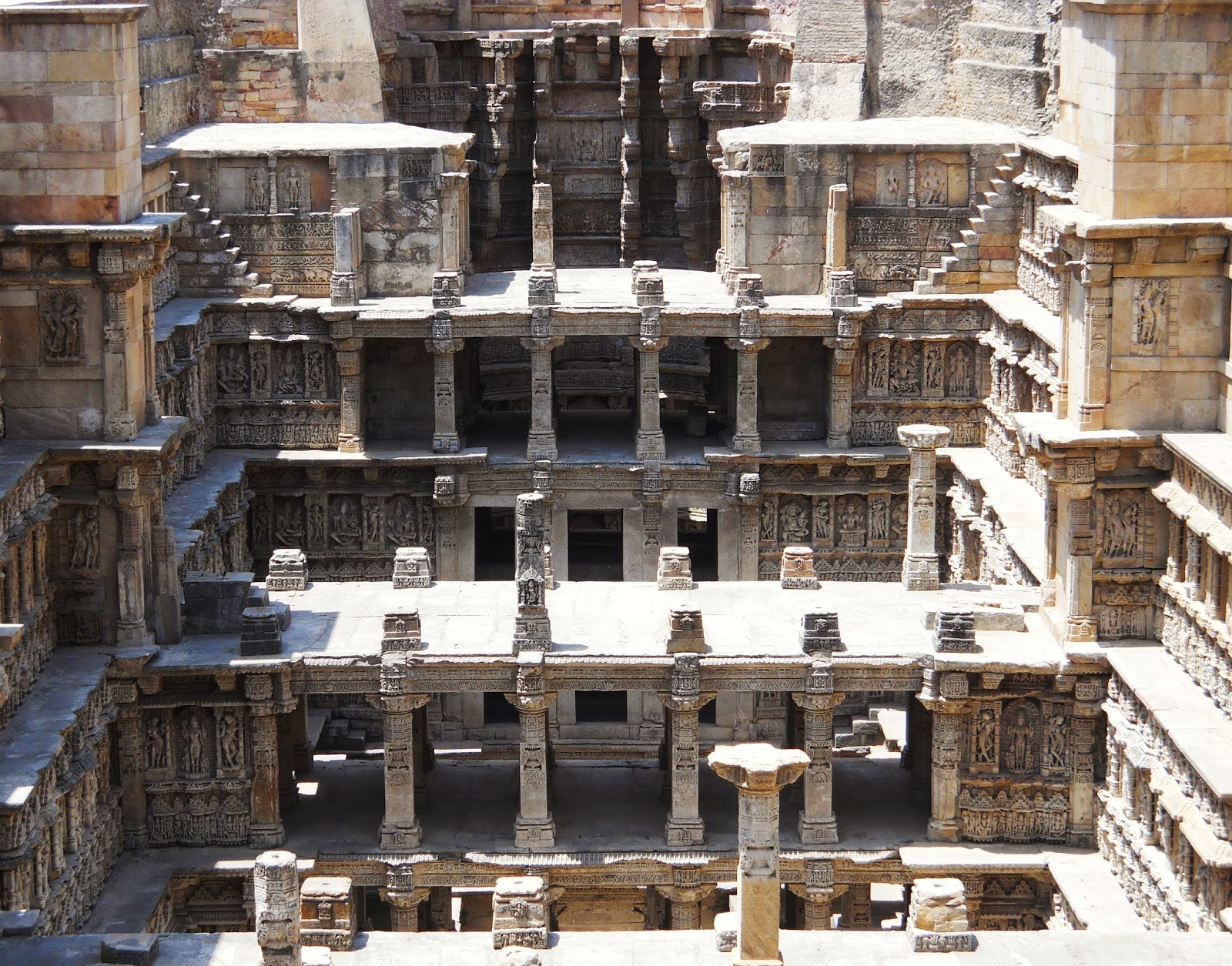 Looking into the step well. In its original form, the well would have had seven terraces, each on a separate level, along with a large torana, or ceremonial gateway,  and so would have looked very different from what you see here. There would have been considerably more shade inside, and the lowest levels would receive very little direct sunlight except in the middle of the day.  Over time the torana has disappeared, and the uppermost terrace has been stripped away, leaving only remnants of the lower six. While even after a millennium of neglect the sheer quantity of sculpture within the step well is an amazing thing to see, when it was built Rani ki vav apparently contained close to twice as many statues.  At the back, or western, edge of the construction is the primary well shaft, the deepest part of Rani ki vav, which is now annoyingly off limits to the public. This was dug deep enough to allow access to the water table of the Saraswati River, which even as late as the 1980s still replenished the well, though the shaft has since gone dry. In front of the well shaft is a rectangular reservoir. A long flight of steps, with seven separate landings for each terrace, leads up from the reservoir, while two small secondary staircases (both, again, out of bounds) lead down from just in front of the well shaft. When the stepwell was still filled in with silt, the only thing in the picture above that remained unburied was the topmost few meters of the well shaft. Until the 1980s virtually all of the statues and columns pictured here were underground, encased in silt.

As a tourist site Rani ki vav leaves much to be desired. Visiting the step well is frustrating, as no matter where you're going in Gujarat, getting to Patan requires quite a long detour, and once you get there, you find that much of the actual structure is blocked off and, even worse, impossible even to see. One can go some of the way down into it, but an awkwardly placed railing not only prevents you from going further, but also stops you from getting a view of the most impressive parts of the step-well (a problem which could be easily fixed if the A.S.I. would simply move the railing forward a few feet.) Both the main reservoir and the well shaft, the two deepest and therefore most impressive parts of the building, are off limits. My experience of visiting was made more annoying by a security guard who insisted on being an impromptu and largely ignorant ("This vav is 5000 years old") guide in order to try and get rupees out of me...The really was no getting away from him either, given it was just him and me down in the pit at 11 A.M...no other tourists were willing to brave the heat...

Still, these things shouldn't discourage one from visiting the stepwell. What one can see is still incredible, and even in its ruinous state and with the flaws in its presentation by the A.S.I, Rani ki vav is still in my estimation one of the very most spectacular archaeological sites in all of India. 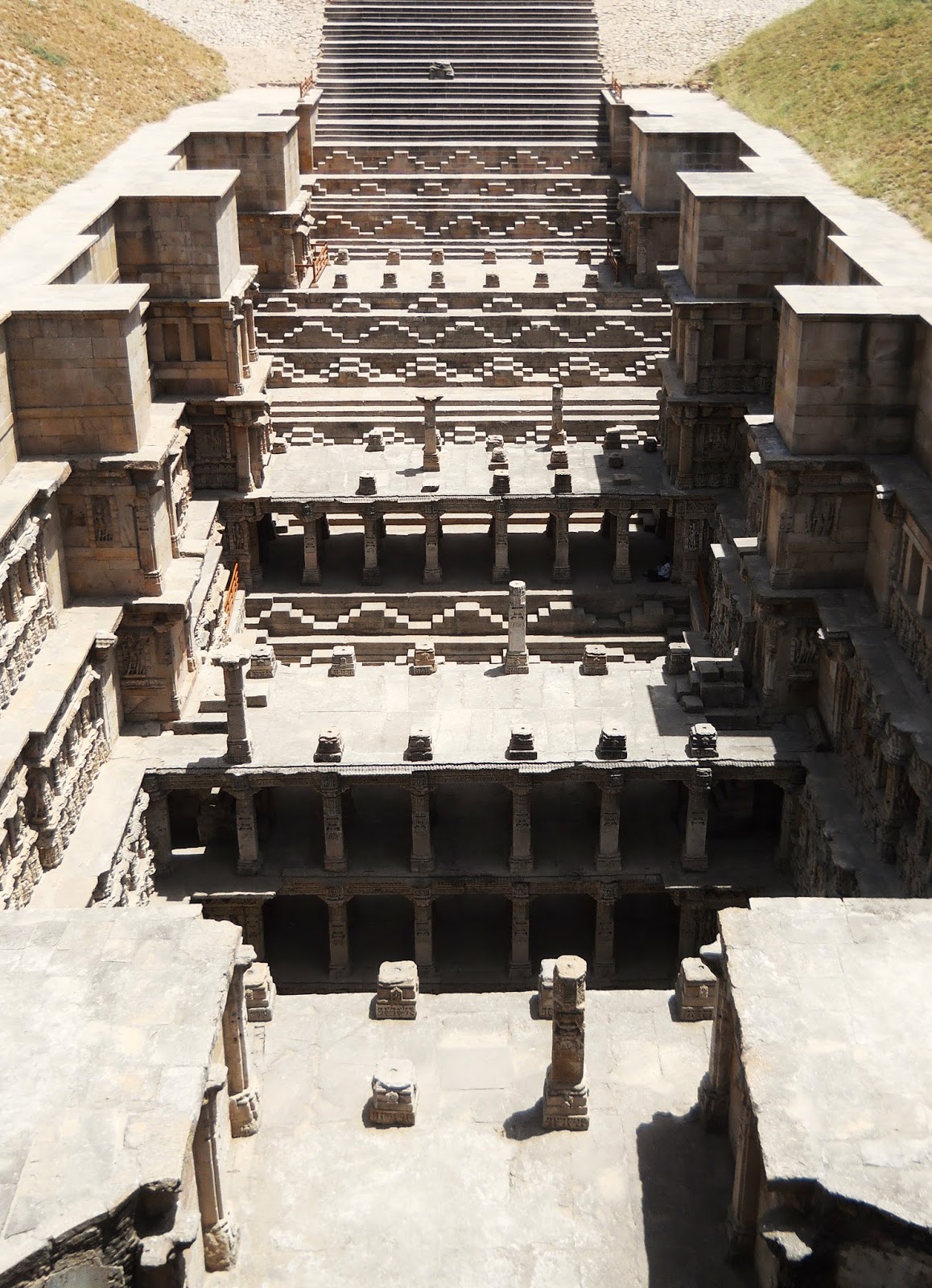 This is an eastward facing view from the top of the well shaft, which gives a good impression of just how much of the structure is missing. 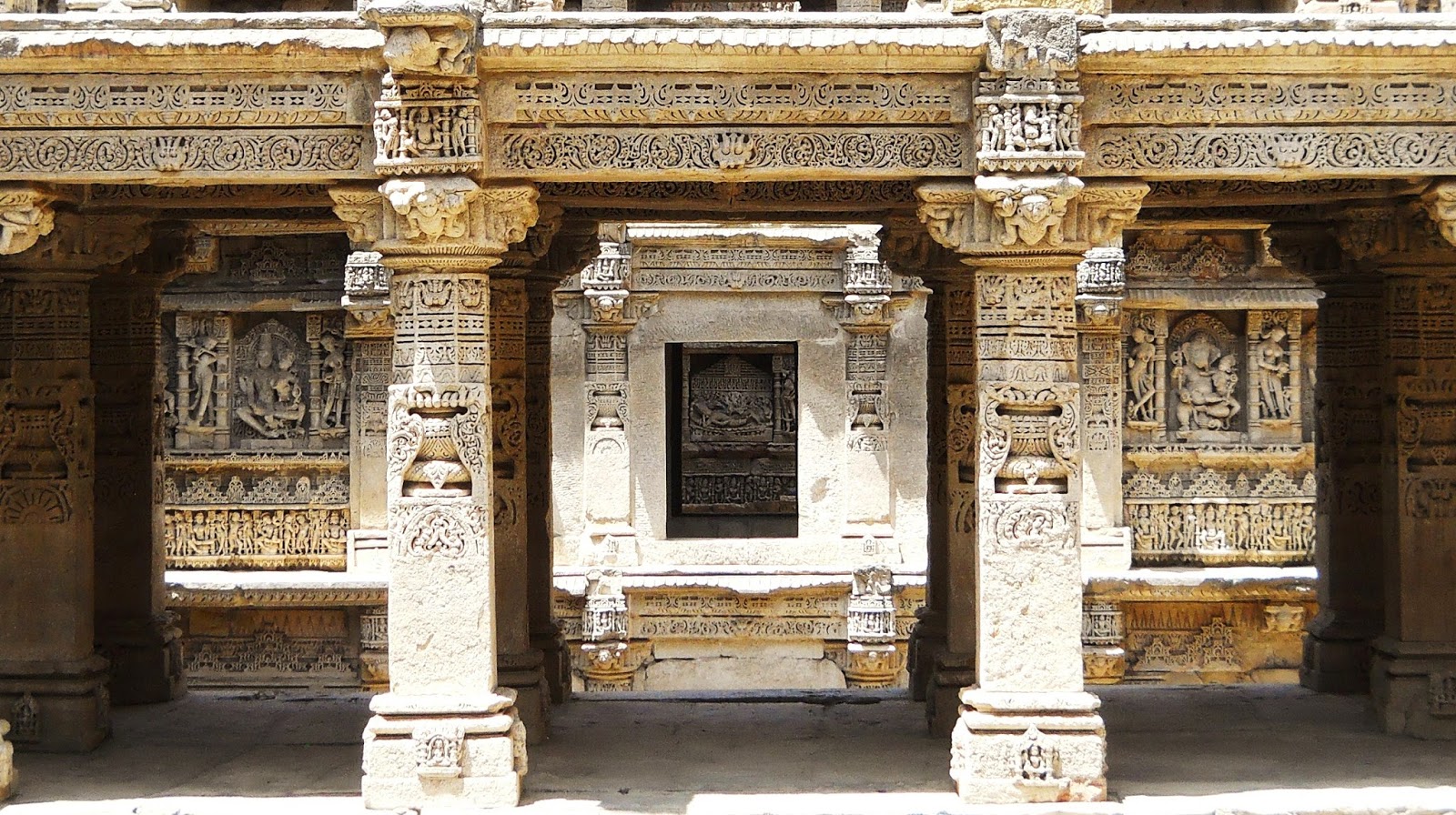 Profusely carved columns and niches inside Rani ki vav, looking straight towards the back of the well shaft. The statue in the middle is Vishnu reclining on the serpent Shesha, while the niche to the right depicts Ganesh and his consort, and that to the left shows Vishnu and Lakshmi seated on Vishnu's mount Garuda. 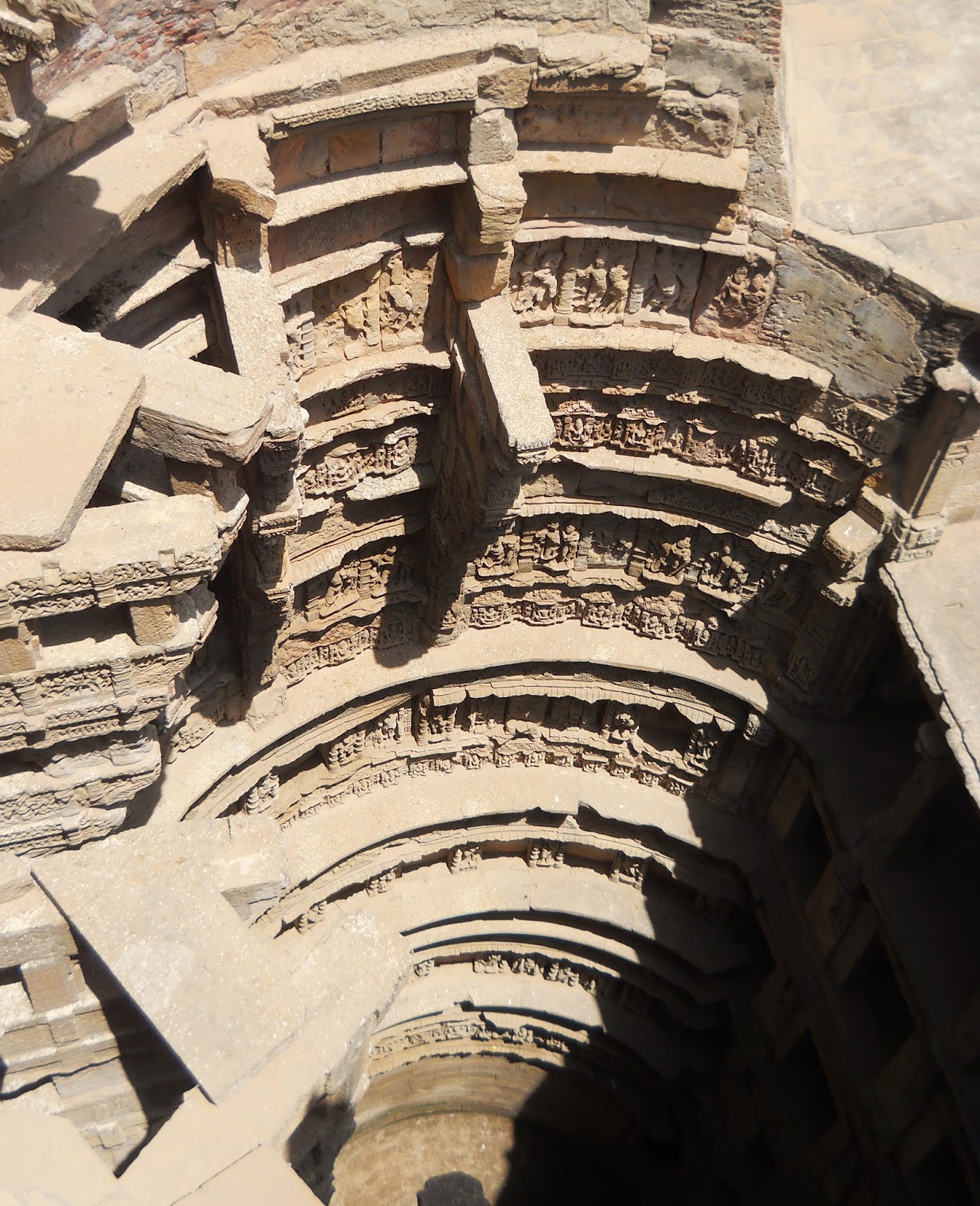 Looking directly down into the well shaft. It really is a shame that one is not allowed down there, especially since the shaft is the most intact part of the whole stepwell. 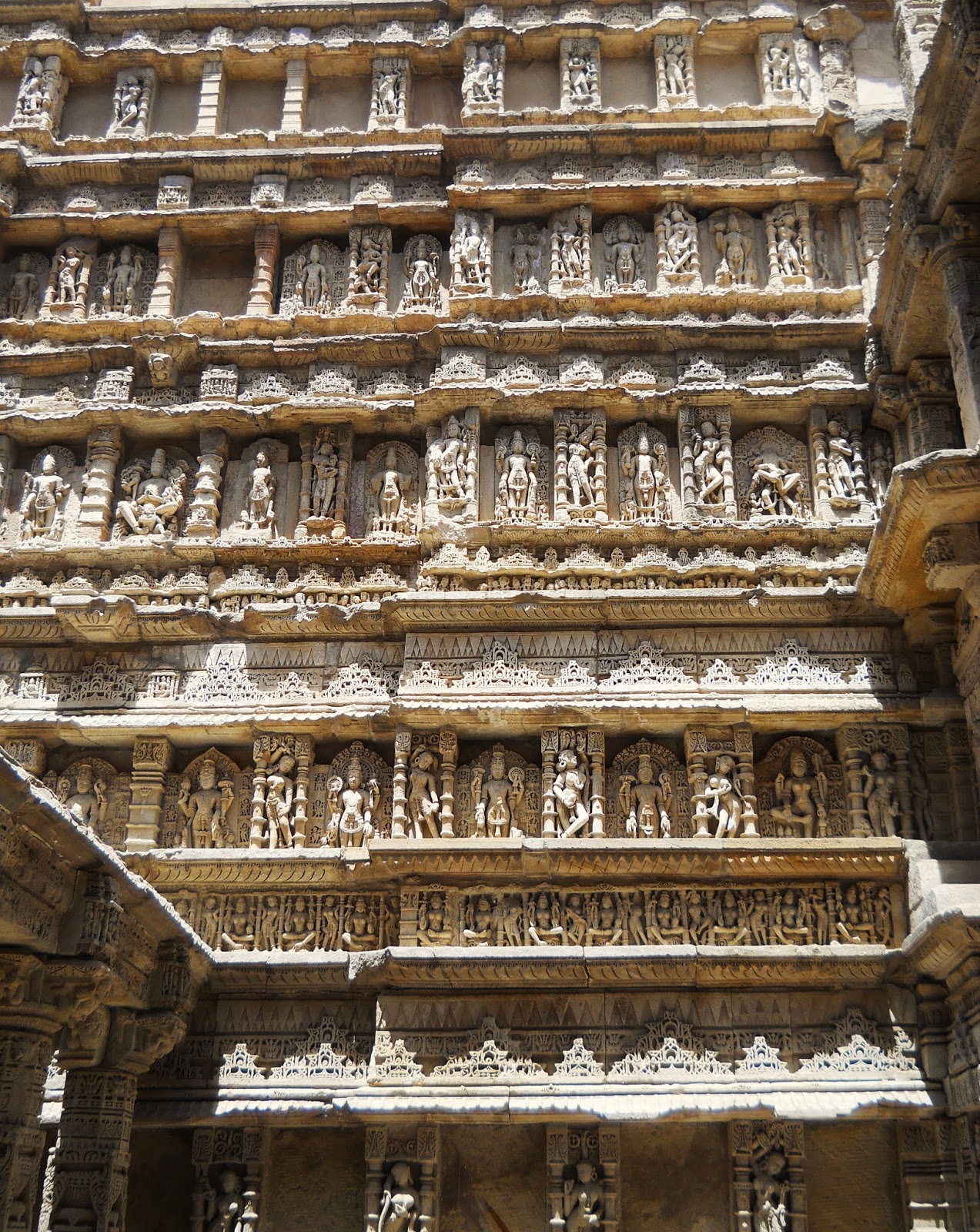 The incredible walls of the stepwell. The lower down one goes, the more of the statuary remains. However, apparently in some of the niches on the upper levels, the statues were never installed, implying that the stepwell was never entirely finished. 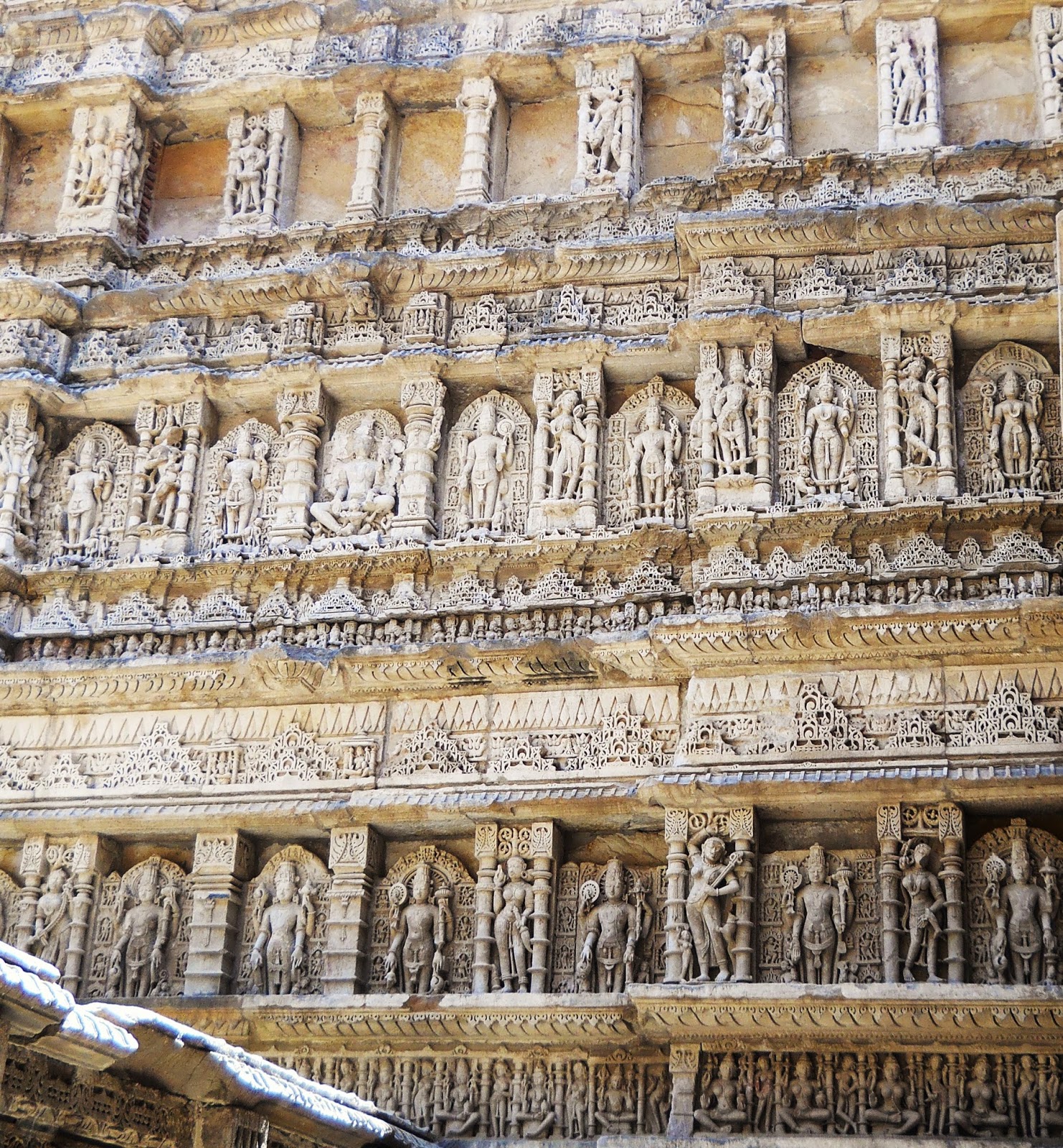 More incredible statuary. This view would not have been possible before the stepwell fell into ruin: What we would be seeing here would be the bottom of one of the terraces. 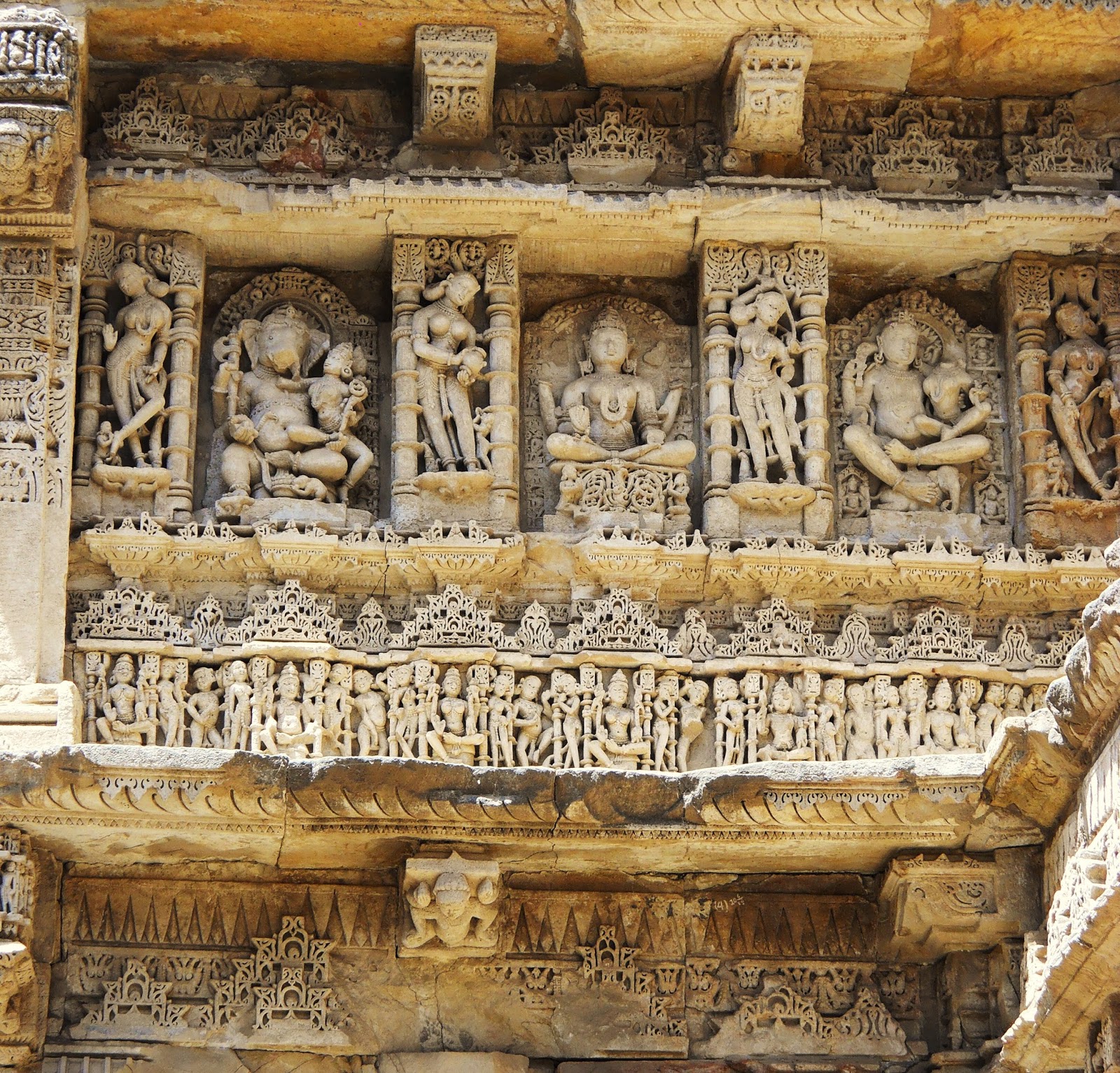 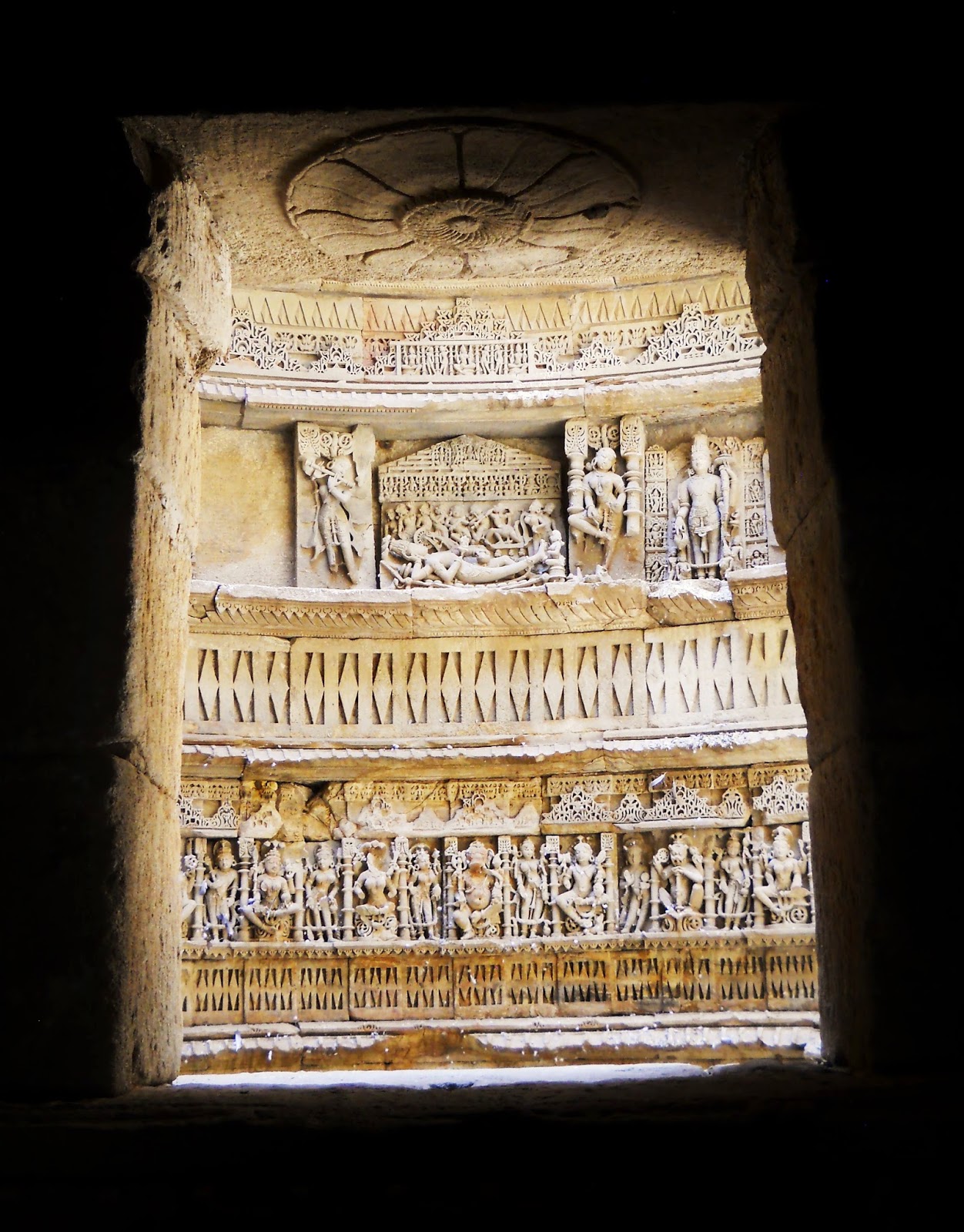 A view through a stone corridor toward one of the reclining Vishnus at the back of the well shaft. Vishnu is the primary deity of the of the stepwell, and a large proportion of the sculptures are depictions of one of his many forms. 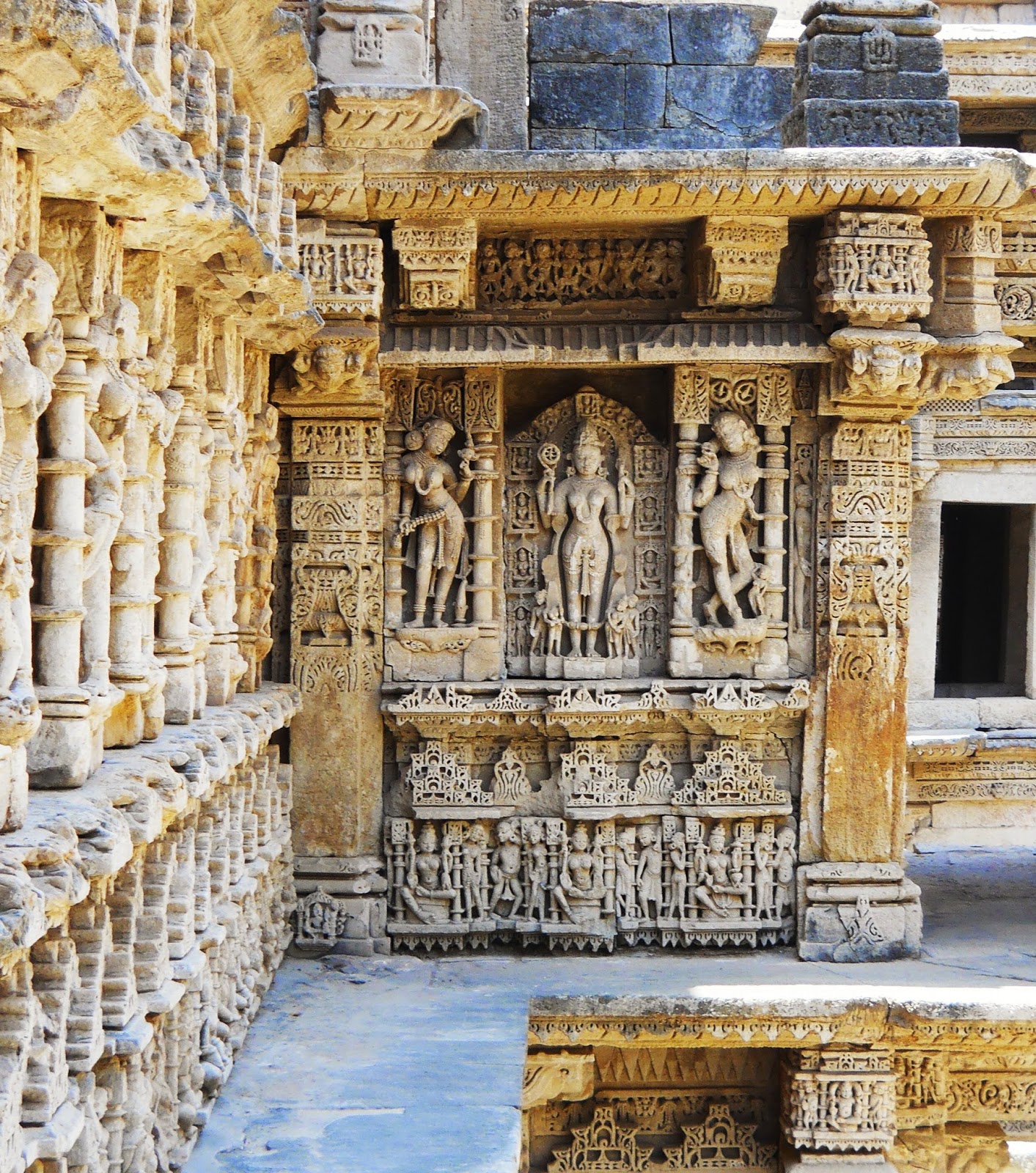 Presumably a depiction of one of the many Gauris, who are different forms of Parvati, Shiva's consort. Another common motif in the stepwell, Gauris were worshiped as the center of their own, woman-centric cult. After sculptures of Vishnu, carvings of Gauris and other forms of Shiva's consort are the most numerous inside the stepwell. 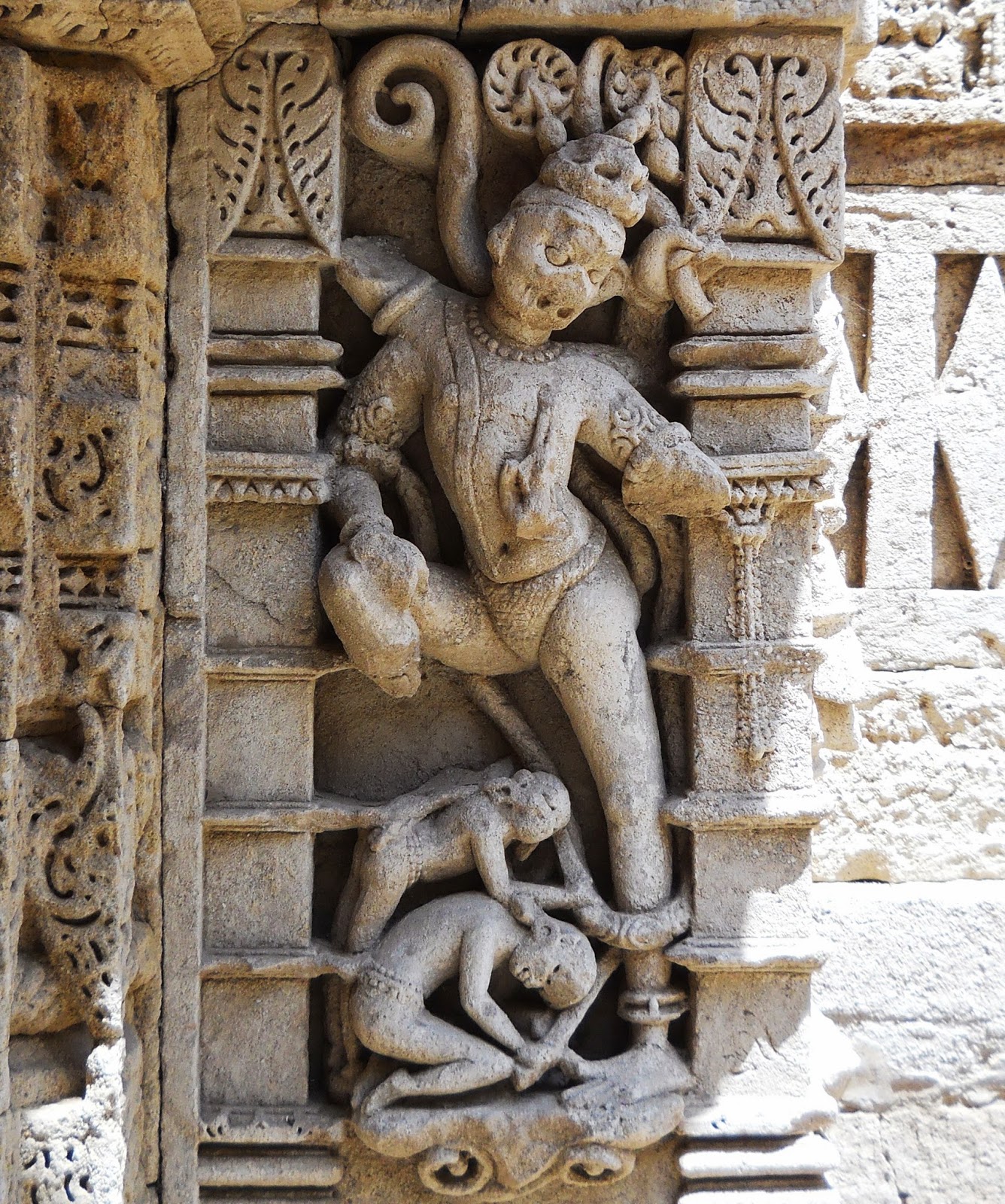 A somewhat worn statue of a four armed Hanuman about to strike a blow. 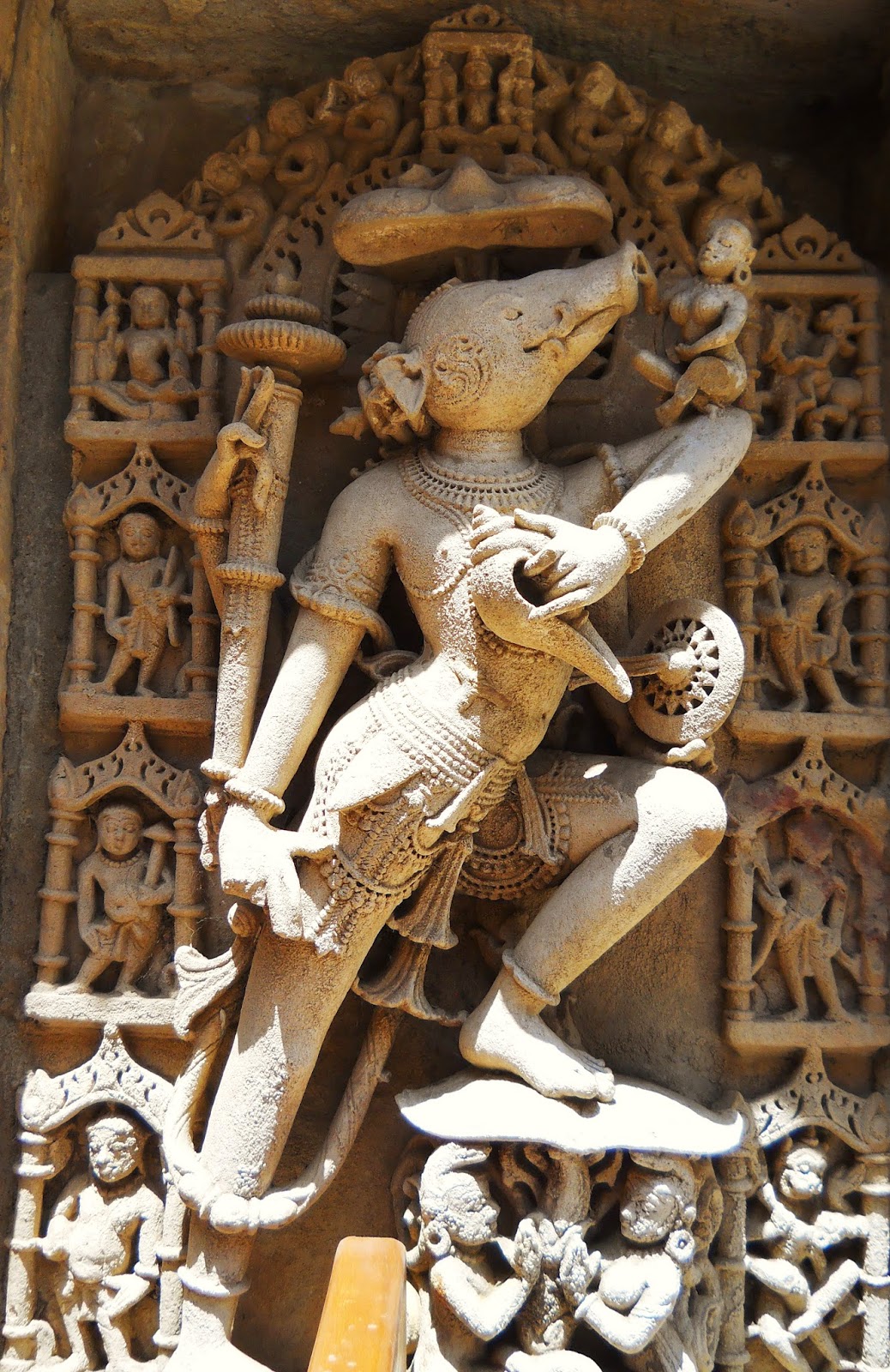 Varaha, Vishnu's bore headed incarnation, striking a heroic pose. Note the goddess on his elbow caressing his snout. The scene being depicted here is Varaha lifting the Earth Goddess up from the depths of the ocean. 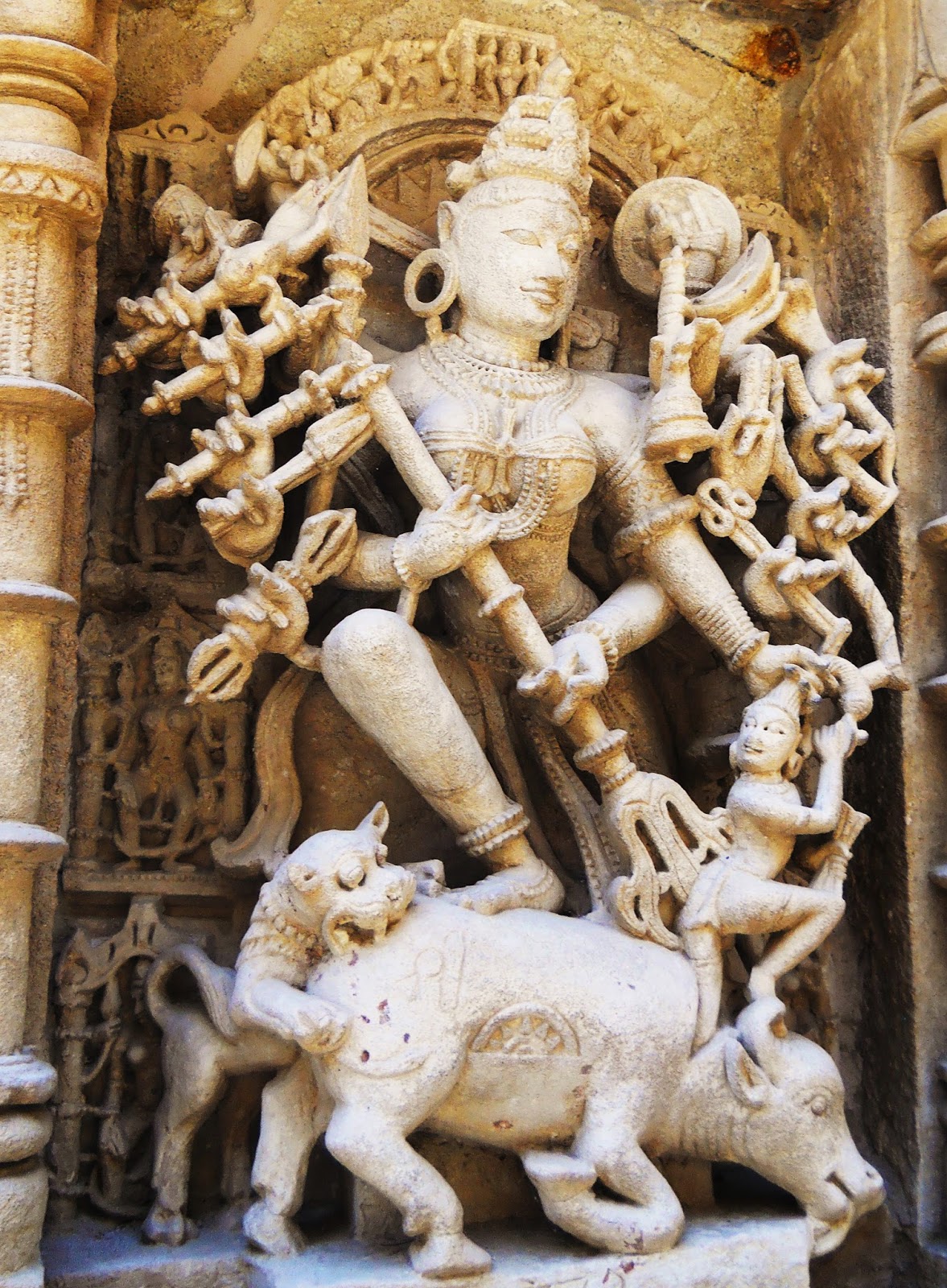 Durga slays the bore demon, her lion attacking from the side.

A Camphor spirit, as represented by a bathing maiden. Camphor is what was traditionally burnt in Hindu religious ceremonies. Note the bird to the left apparently drinking the droplets of water falling from the maiden's hair. 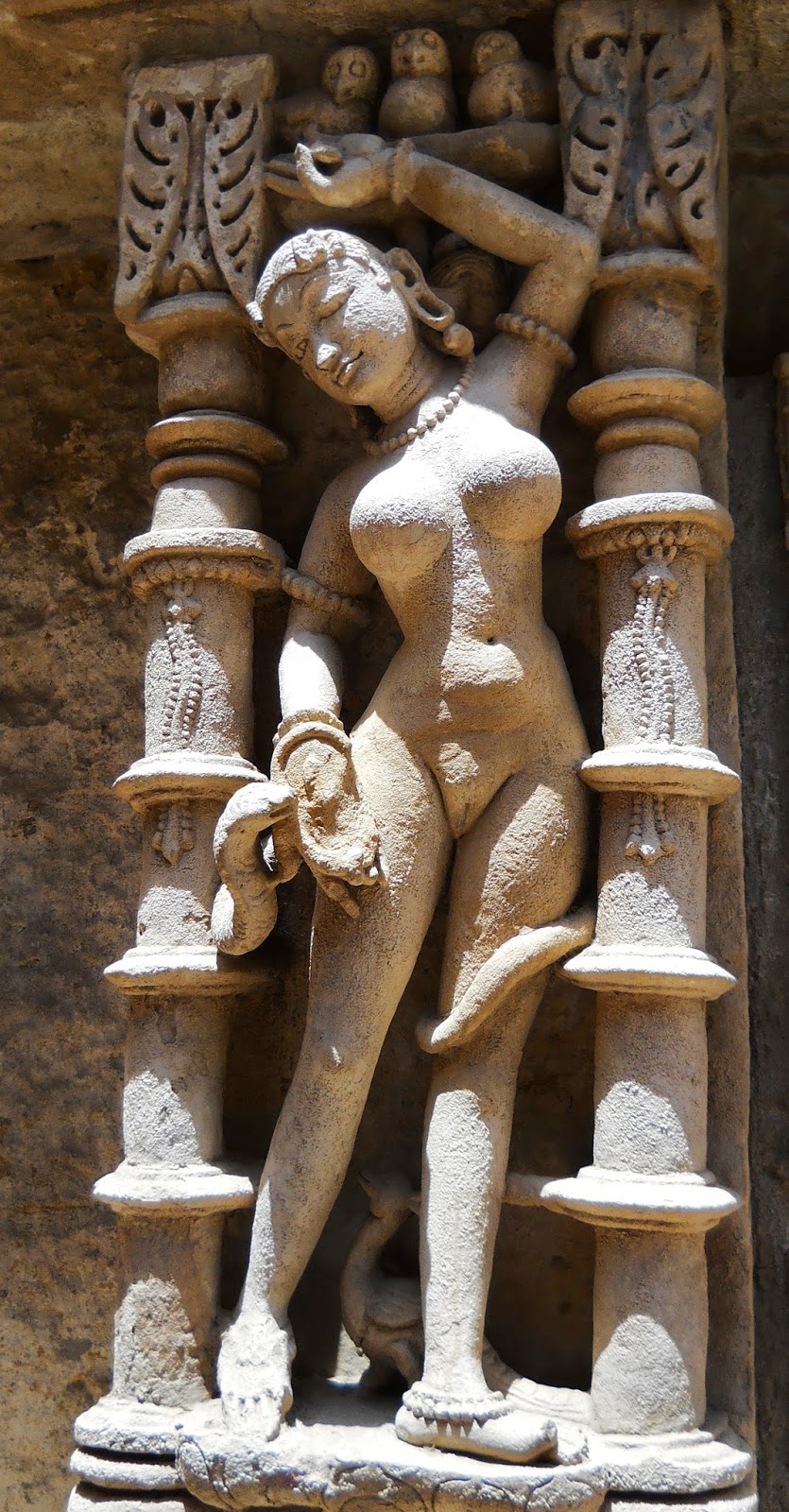 A naked serpent woman, along with three owls above, and a peacock behind her legs. The depiction of snake spirits inside the stepwell is fitting, as snakes are regarded as primarily being water dwellers in Hindu mythology.

If you ever happen to find yourself in Patan, I would advise that you try and get to Rani ki vav early in the day. I took the pictures above at about 11 A.M...which, besides being tremendously hot, was also not the best time as far as lighting was concerned. In some of the other more intact stepwells in Gujarat the sun only reaches the lowermost levels at midday, hence the best light is between 10 A.M. and 12 P.M. I had thought the same would hold true at Rani ki vav, but it proved not to be the case, mostly because so much of the original structure no longer exists, allowing the sun in even into the deepest levels during most of the day.

Much of my information above comes from the handy Archeological Survey of India publication on Rani ki Vav by Kirit Mankodi. They sell it for rs. 30 at the ticket booking window, and it really is worth it.

For more on Solanki architecture, go to: http://evenfewergoats.blogspot.com/2014/09/modhera.html