Exploring the Abode in the Clouds 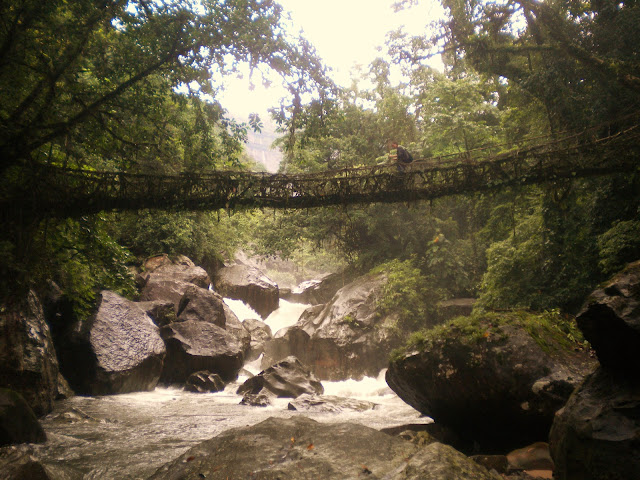 My brother crosses the Nongthymmai Living Root Bridge, the longest of all (known) living root bridges, and arguably the most spectacular, in the monsoon season of 2011. Believe it or not, the whole span is made up of nothing but rubber tree roots that were trained across that stream over the course of a few decades by the local Khasi villagers. It is perhaps the world's most amazing example of biological architecture. During this trip that I'm putting together, we'll be staying in a village guesthouse about half an hour away from here, in a little visited corner of northeast India that is simply abounding in fantastic things to see. 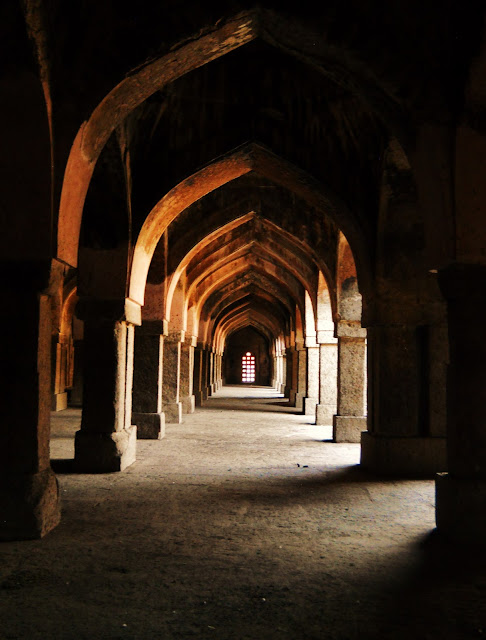 Arches and Pillars in Khirki Masjid, one of the most unusual and atmospheric buildings in Delhi. Constructed during the reign of Firoze Shah Tughlaq, perhaps the Delhi Sultanate's greatest builder, in the 14th century, the building combines design elements from traditional mosques,  Islamic military architecture, and Hindu temples. The result is a mosque like no other.

The Khirki Masjid is bizarre in a number of ways. First off, the vast majority of the world's Mosques are either open air (such the Delhi Jama Masjid), or have huge spacious chambers, so that large congregations can gather. But in the Khirki Masjid, the congregation space is enclosed, with the interior of the building being divided by rows of pillars into a series of narrow arcades, rather after the fashion of many Hindu temples. The Masjid was in fact designed by a recent convert to Islam from Hinduism, which may to certain extent explain it's unorthodox layout. The Masjid is also unusual for its embattled, fortress-like appearance. It certainly does not look like a mosque from the outside, and if I had just stumbled upon it, I would not have guessed that that was the function the building served. Its harsh, rather functional and militaristic style makes the building look more like it was meant to keep people out than to allow them in.