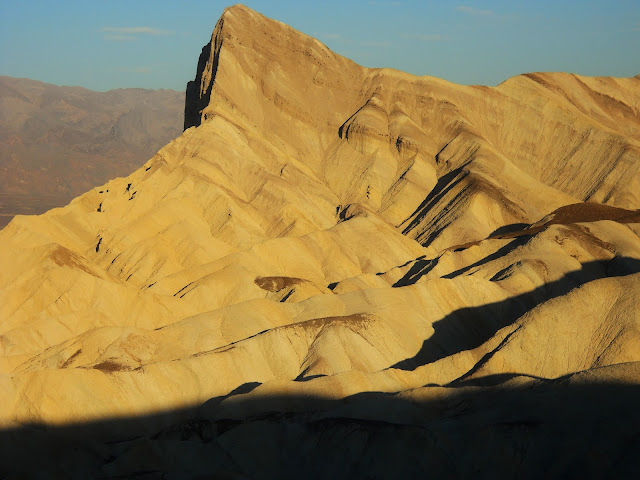 The view from Zabriskie Point, one of the iconic vistas of Death Valley National Park, just after dawn.

So, this is going to be about Death Valley National Park, which stretches over about 5,300 miles of the Mohave Desert in far eastern California (and a small patch western Nevada). The park encompasses not only Death Valley itself, but also a vast expanse of the Panimint and Last Chance ranges. The terrain is immensely varied, from Telescope Peak in the Panimints, which rises to 11'049 feet, to Badwater Basin, the lowest point in the U.S., and second lowest in the Western Hemisphere, which is 282 feet below sea level. The series of ranges and valleys within the park are part of the Basin and Range Provence, where, as with the Inyo Mountains to the west, whole blocks of the earth's have either been pushed up or caused to sink due to tectonic forces. One of the results of these processes are valleys, such as Death Valley itself, that are actually below sea level, and are apparently still sinking. Instead of seeking out a path to the ocean, the water courses in this region flow down into the middle of the sinks created by the extremely low lying valleys and empty into huge salt flats, such as Badwater Basin. 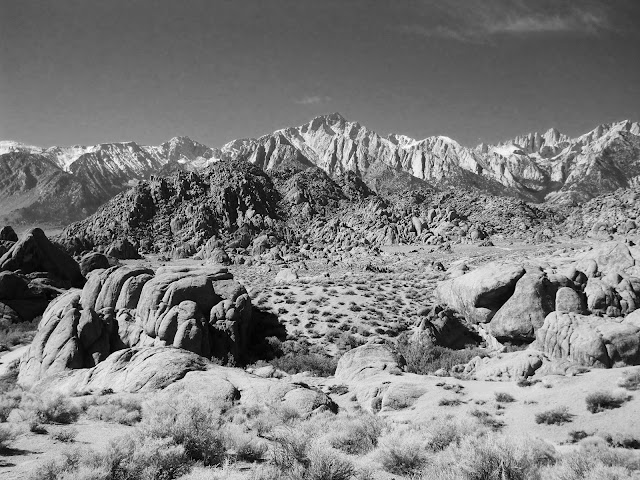 The classic Lone Pine view, from the appropriately named Movie Road. Looking due west, over the Alabama Hills, directly towards Lone Pine Peak (about 13,000 ft). Mount Whitney, the highest point in the lower 48 at 14,505 feet, is the prominent triangular peak to the right of this picture. This area is one the all time great Hollywood shooting locations (right up there with the Vasquez Rocks further south). In perhaps the most famous film ever filmed there, Gunga Din, it stands in for what was then the North West Frontier Province of British India (The Sierras are playing the Himalayas). It also featured in an old Humphrey Bogart movie called High Sierra, and stood in for Afghanistan in the film Kings of the Kyber Rifles, along with serving as any part of the old west from Missouri to Oregon in (almost) literally billions of  western films and T.V. shows, including How the West Was Won. More recently, the area had short cameo in Gladiator (in a few of the shots where Russel Crow is tired on his horse, while improbably riding from the Danube to Spain in what seems to be two or three days), and in Iron Man where it is, again, a stand in for Afghanistan. I have been seeing this area all my life, most notably in the Kevin Bacon subterranean monster film Tremors , which makes excellent use of the picturesque, rounded granite boulders the area is famous for. Yes, I can now say I've hopped on the same boulders as Kevin Bacon. 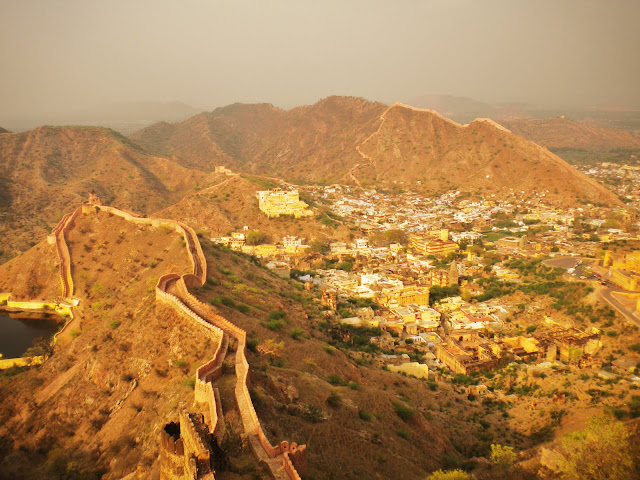 View over Amber from Jaigarh Fort


Hey there. So, I was looking over some of my posts from the past, and I saw that I had this one here about a third of the way done. All of the photos were uploaded, and some of the captions were written, but I had never finished it. Well, that's what I'm going to do now. Some of the details are going to be a little bit fuzzy, the space of time I'm covering being, as of now, more than a year ago, though it feels like even longer. Bear with me if it's a bit disjointed in places....