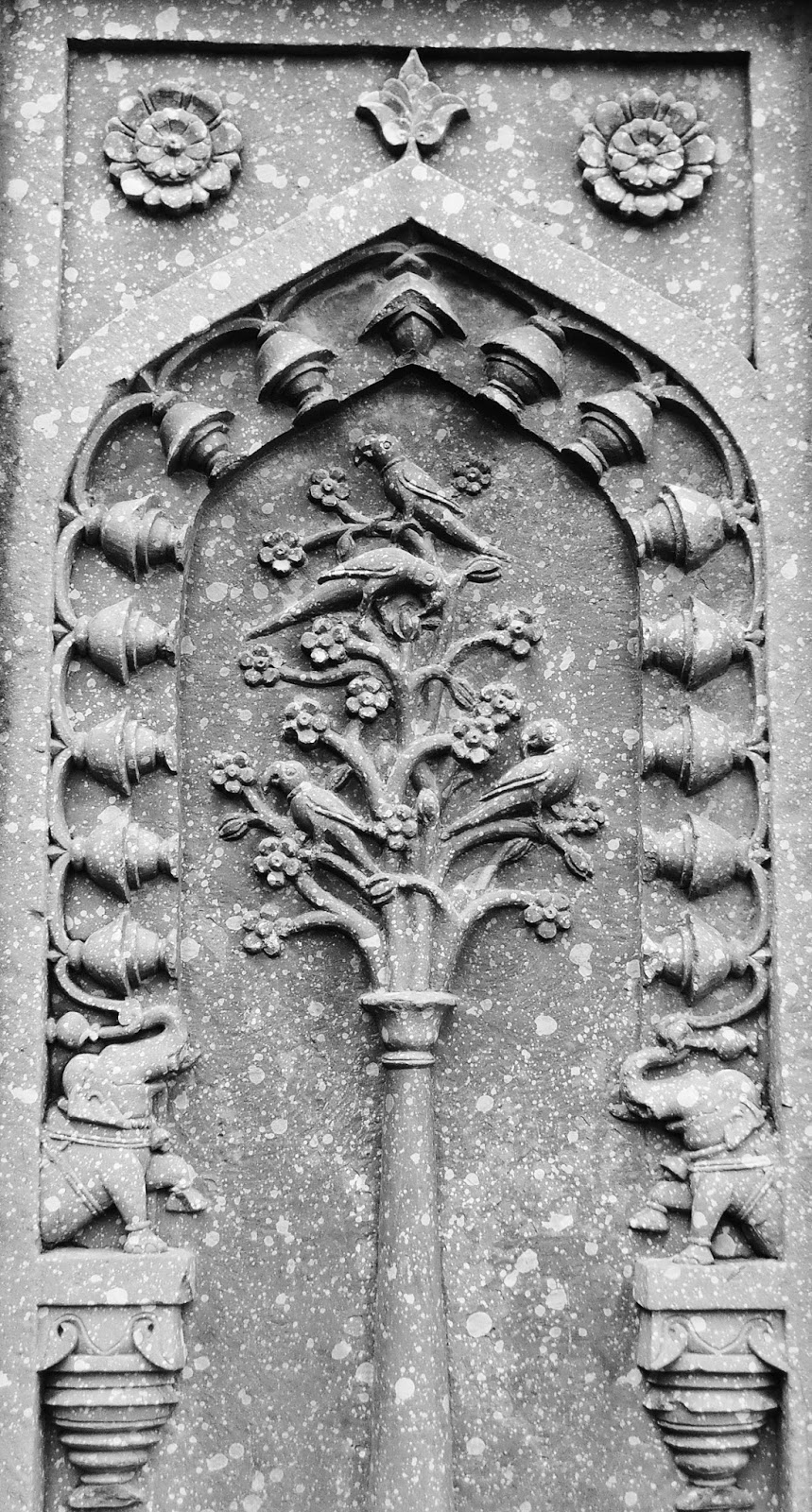 Truly excellent carvings on the side of one of the false gateways to the tomb of the Mughal emperor Akbar. The carvings say a great deal about the man, as they show that he did not adhere to a strict interpretation of Islam, which forbids any sort of art depicting humans or animals. It's rather a shame that by Shah-Jahan's time the Mughals had shifted away from incorporating carvings of living things other than plants into their buildings. The quality of the craftsmanship here is extremely high, as it is throughout Akbar's tomb complex. It's interesting to speculate where Akbar's style of architecture would have gone had it outlived him.

Sikandra is an area about 10km West of the Taj Mahal. It's assumed that the name comes from Sikander Lodi of the Delhi Sultanate, who moved his capitol from Delhi to Agra in the 16th century. Why his name was applied to this particular patch of ground, is unclear, as his stronghold was most probably at the location of today's Agra Fort, while there are no Lodi era remains in the immediate vicinity (though the dates of some of the buildings in the area are a matter of controversy). 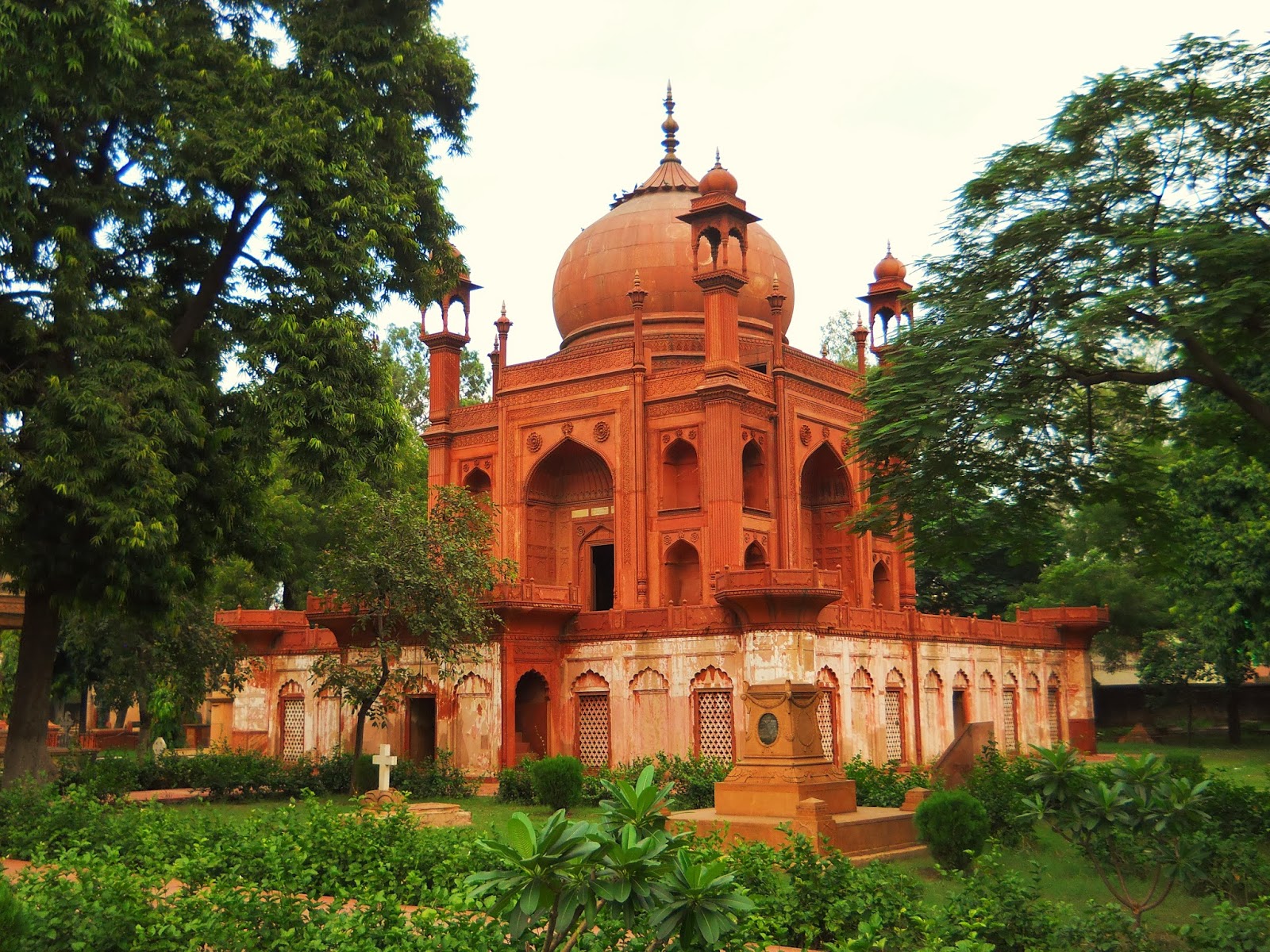 The rather splendid late Mughal style tomb of John Hessing, the most prominent mausoleum in Agra's 460 year old Roman Catholic cemetery. The information available about Hessing is vague and often contradictory, but from what I've been able to find, it seems that he was once a soldier in the Dutch East India Company army who fought the British in Ceylon during the fourth Anglo-Dutch war. After the British victory, they took possession of the Holland's territories in India, but Hessing decided to stay in the subcontinent and  find employment as a professional soldier. He entered the service of the Nizam of Hyderabad, and then moved on to serve with the Marathas, fighting as an officer in their army against both other Indian armies and those of the British East India company. In 1799 he assumed command of Agra Fort and held it until his death. The tomb was commissioned by his wife Anne and their family. It is usually said that, like the Taj Mahal, the Tomb of John Hessing was built out of grief at the loss of a loved one. For this reason, and also because Anne Hessing was apparently inspired by the Tomb of Mumtaz Mahal, the Tomb of John Hessing is frequently referred to as the Red Taj. This is rather unfair, as it makes it sound as though Hessing's Tomb is little more than a cheap imitation of the Taj, when in fact it is very much its own mausoleum. The architecture is similar in certain respects, but the design of the tomb is, in the final analysis, just not that much like the Taj.  The building itself, which betrays hardly any European architectural influences, is considered one of the finest European tombs in India. In style, the mausoleum is entirely Mughal, despite the fact that Hessing was a Christian. 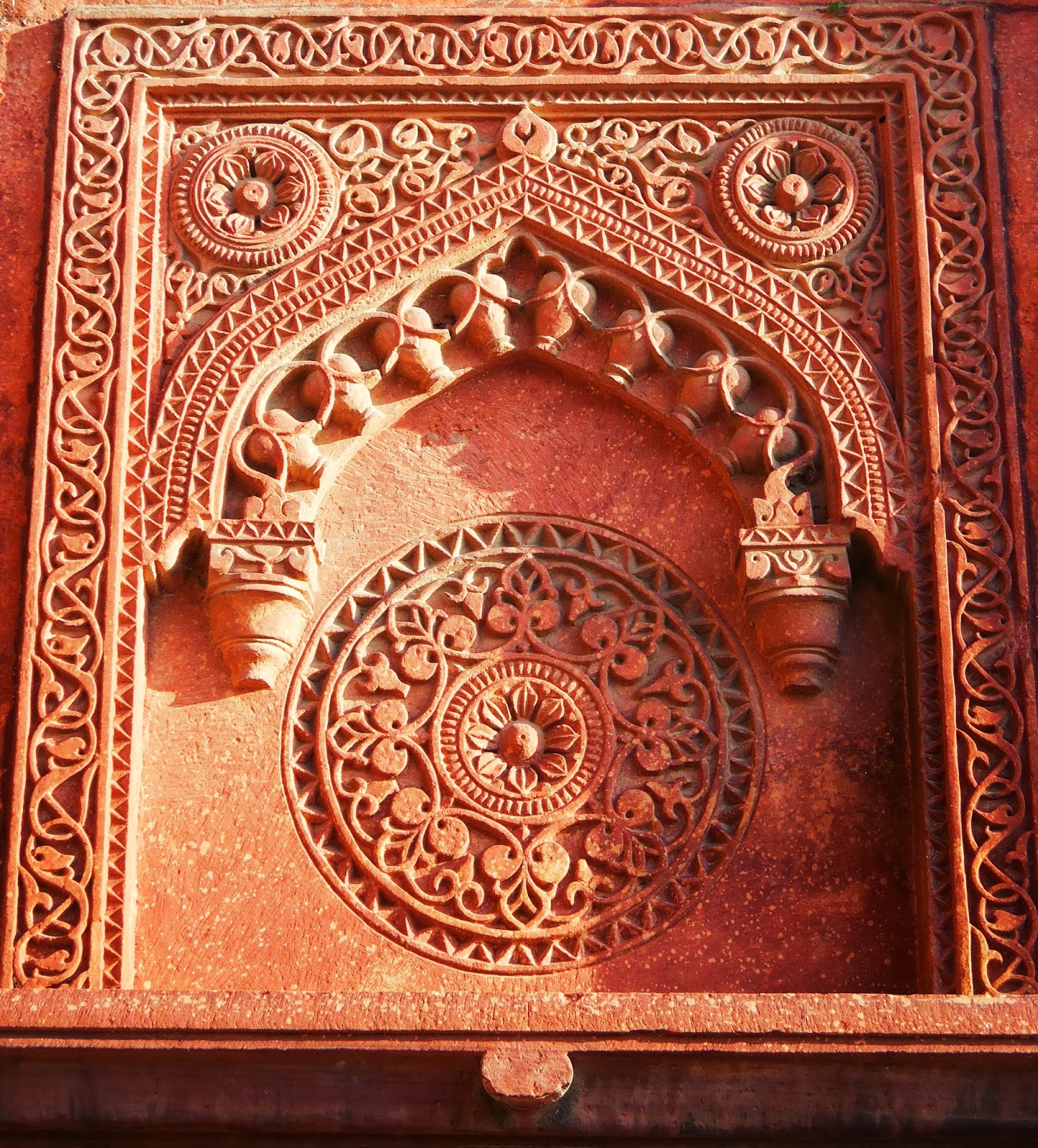 Red sandstone carvings in the Jehangiri Mahal of Agra Fort.

Because of its proximity to the Taj Mahal, Agra Fort is the second most visited historical site in Agra. The fort is one of the most extensive, and also most intact, collections of Mughal architecture in India. The Delhi Red Fort is similarly spectacular, and may have at one point been just as impressive as the fortified city in Agra, but unfortunately time has not been kind to the fortress in Delhi, which, due to the British clearance of large parts of the compound after their crushing of the Sepoy uprising, is little more than a hollow shell of itself. Nearby Fatehpur Sikri, the short lived capital city of Akbar, also contains a large concentration of the greatest buildings of the Mughal period, but they were all built within a relatively short period of time and all reflect the Indo-Islamic architectural tastes of Akbar's reign. Agra Fort on the other hand contains a mixture of buildings in both the Akbari style and in the later, more austere, style of Shah Jahan. Thus it is perhaps the only place in the world where one can see the very different architectural styles of the Mughal empire's two most prominent builders literally side by side. 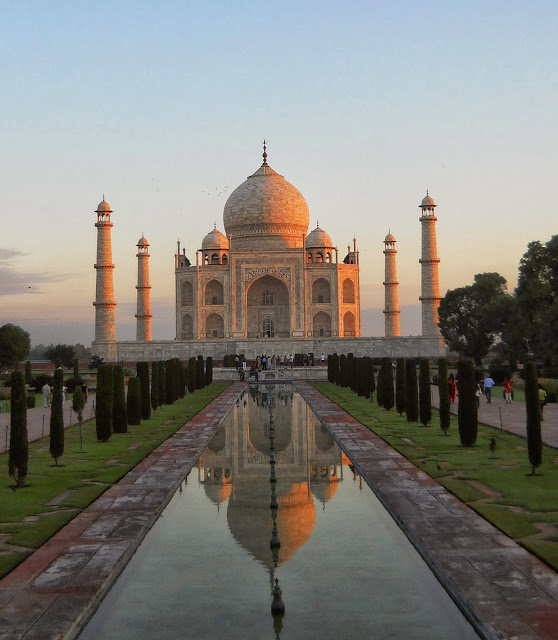 The Taj at dawn. Now there's a picture I bet you've never seen before. Actually, this is maybe the world's single most iconic image, but since the entire tomb complex is oriented around creating this very composition, you mustn't blame me for taking a cliched snap.

This is the first post in a series I'm going to do on a very intense week long trip I took to Agra in October of 2013. My two main purposes in re-visiting Agra were to go to the places I had not been to before (and there were many), and also to conduct reconnaissance for trips I'm planning to lead. I had been to the Taj Mahal no less than three times previously, yet this was the first time that I had the chance to see it at dawn, so that's where I'll start.