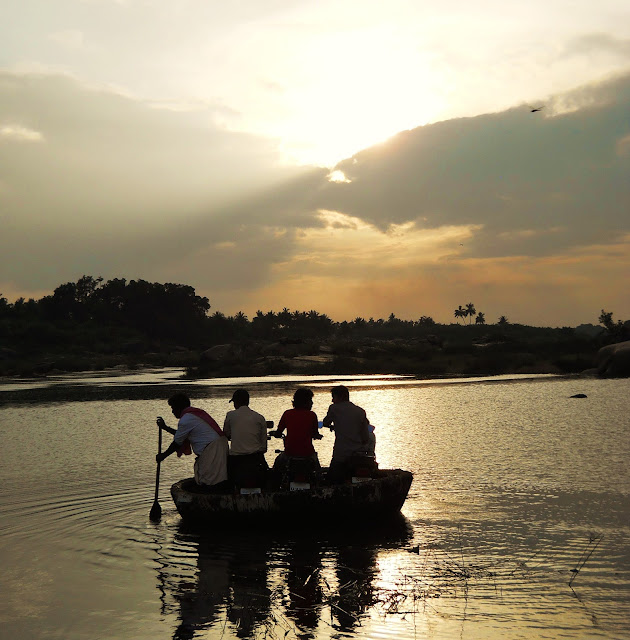 Coracle crossing the Tungabhadra River, late in the afternoon. Coracles have been a means of conveyance in the Hampi area since prehistoric times, and even in the present they seem to have certain advantages over traditional boats. They're cheap, and so lightweight that they can be carried balanced on a person's head like a great big hat. Yet, with such low displacement combined with such a large amount of surface area in contact with the water, they can carry surprisingly heavy loads. The craft in this picture is holding three motorcycles and four people...what must be well over a thousand pounds in a vessel that looked like it weighed less than thirty. Coracles are used quite extensively in the Hampi region, sometimes just for tourist boat rides, but also because, at the moment, there's no bridge that connects Hampi with the settlements just on the other side of the Tungabhadra, such as Anegondi and Virupapur Gaddi. Note the dragonfly flying through the upper righthand corner of the picture.

The little, sleepy, laid back village of Anegondi (Anegondi meaning something like "elephant enclosure") is situated across the Tungabhadra river from the remains of the city of Vijayanagara. Though the ruins in Anegondi are less spectacular, the village has a longer history than the much more well known and frequented historical site on the opposite side of the river. It is also on the other side of the Tungabhadra that the rocky, central Karnataka boulderlands rise to their most spectacular heights.

Judging by the cave paintings in the area (which I looked for but never found), the Anegondi region has been a site of human habitation since prehistoric times. In Hindu mythology, nearby Anjaneya hill is regarded as the birthplace of Hanuman. There is reason to believe that the area was a part of Ashoka's Empire, and indeed, virtually every major player in South India, from the Chalukyas, Vijayanagara, the Bahmanis, Tipu Sultan, and the British, at one time controlled the village. It was in Anegondi that Hukka and Bukka, the founders of Vijayanagara, first established themselves, exploiting the power vacuum created by the waning influence of the Delhi Sultanate in the Deccan, before they went on to found the great empire that would hold much of South India under its sway.

During my time in the Hampi region, I made two expeditions to Anegondi. In both cases, they were merely parts of very long day hikes, and given that I had to make it back to one of two river crossing well before sundown, I would not say that I had the chance to explore the area properly. There's still much more to see there, and hopefully someday I'll get the chance. 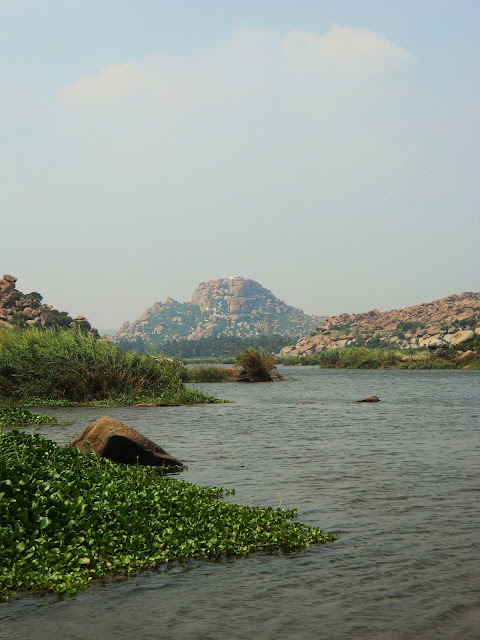 A view of Anjenaya hill, which is believed to be Hanuman's birthplace, from a boat crossing the Tungabhadra. If you turn left on the road from the Vitthala Temple complex you come to the river after a few kilometers. From there, you have to be ferried across, either in a coracle or in a somewhat larger craft with an outboard motor. There is an unfinished highway bridge, which has apparently been in the works for around a decade and a half, that extends out into the center of the river. It partially collapsed in 2009,  adding another ruin to the archeological site. 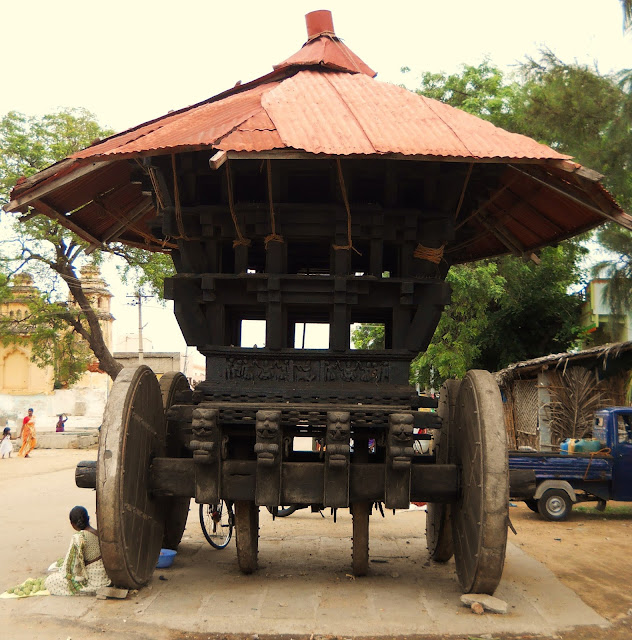 Wooden temple chariot with a corrugated metal roof and a woman selling vegetables next to one of the wheels, in the middle of Anegondi's main street. The vehicle is used for pulling an idol through the streets during festivals. Apparently the biggest celebration in Hampi is called the Virupaksha car festival, where giant representations of Shiva and his consort Pampa are carried through the main bazaar in huge, garishly decorated vehicles with much pomp and circumstance. 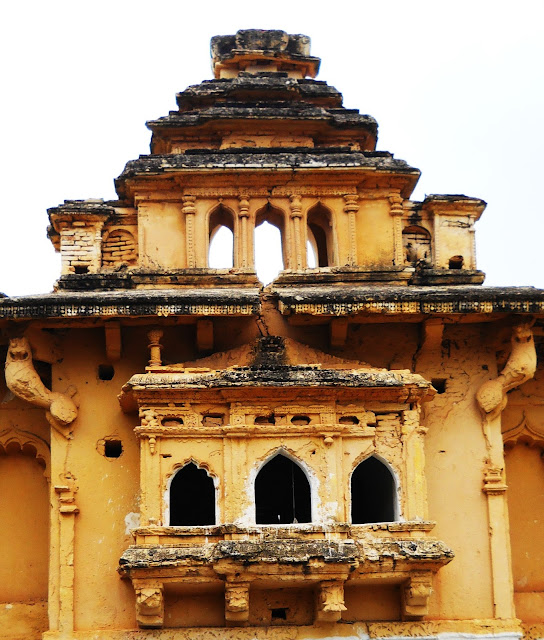 The 16th century Gagan Mahal, the focal point of Anegondi village. Built in the same secular architectural style as the structures in Vijayanagara's Royal Center, the palace was originally meant as a place where noblewomen could watch the streets below without revealing themselves. These days it serves as a council chamber (visitors are not allowed inside), having been donated to the town by the descendants of the Vijayanagar rulers, who still live in Anegondi. 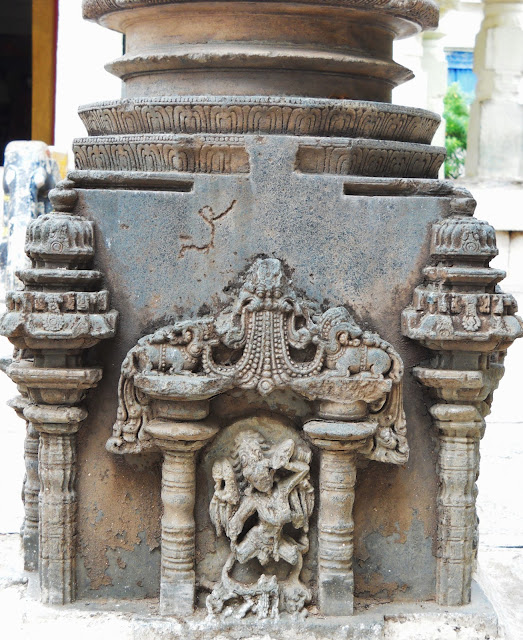 Very old temple column base in the Ranganatha Temple, the largest shrine in Anegondi proper. The carvings on the column are in an entirely different, earlier, style from those in Vijayanagara, and probably belong to the 12th-13th century. 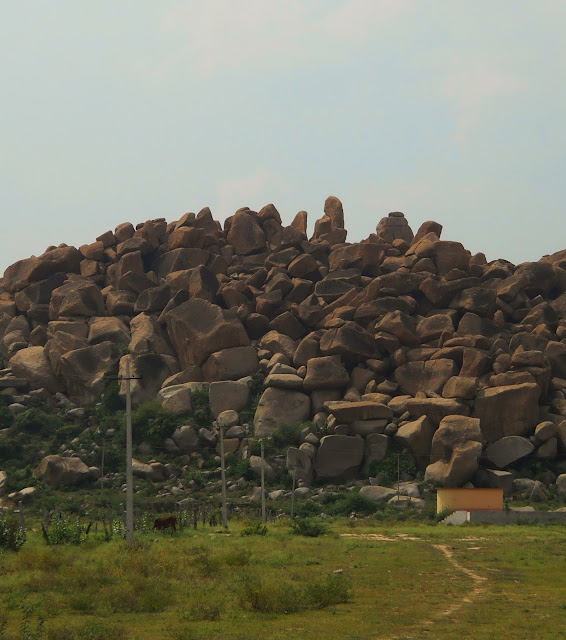 A huge boulder mound to the west of Anegondi. 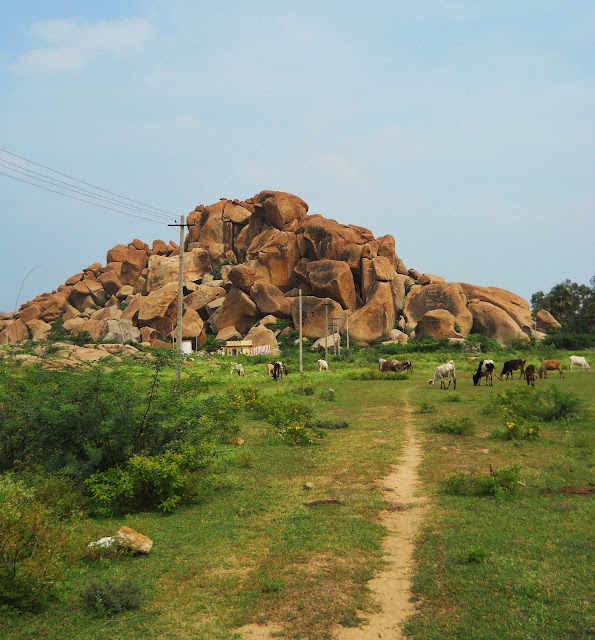 Big rocks, with a small house in front. And cows....many cows... 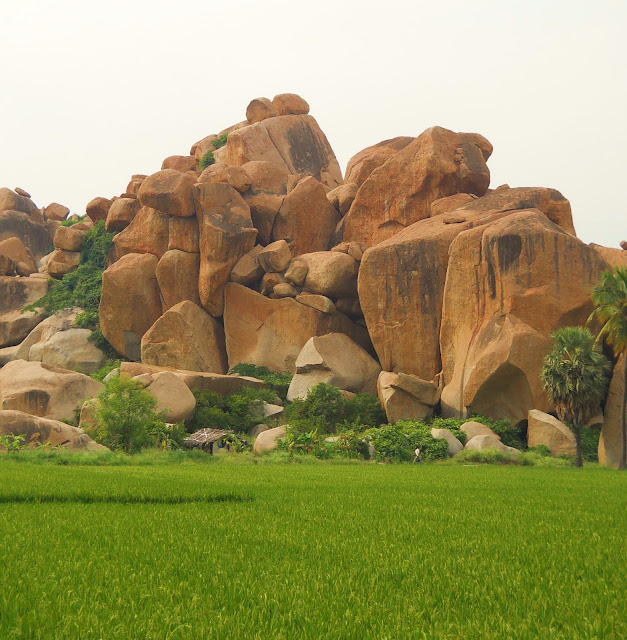 Big boulders next to what I think is a sugarcane field.  For scale, note the little man walking just in front of the bouldermound to the right of the center of the picture. 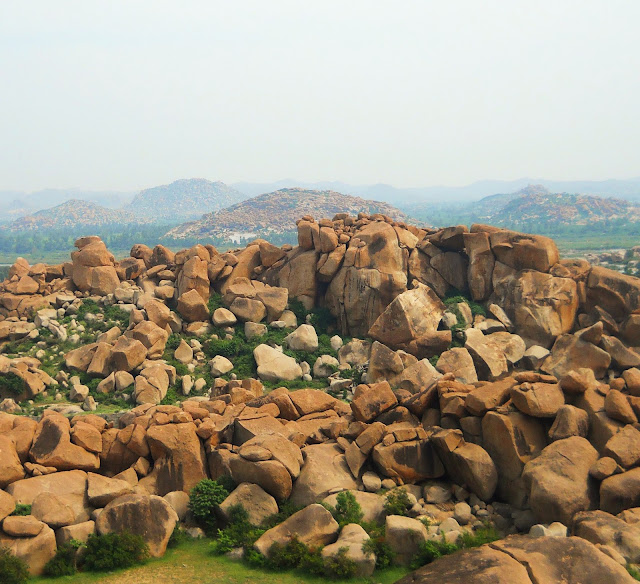 Up on a hill, looking south over many a rocky summit. 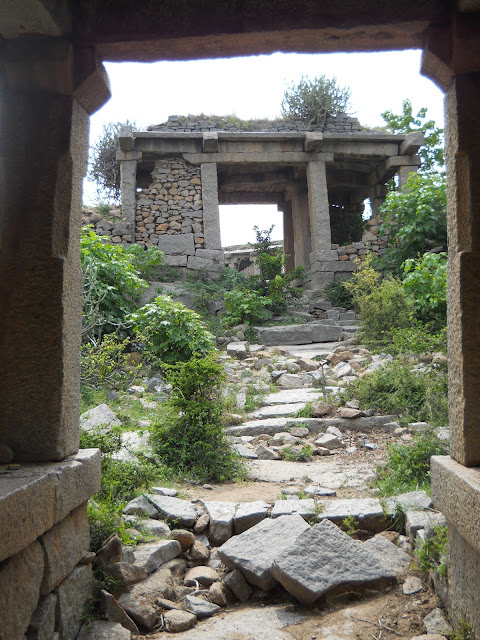 An old barracks, west of Anegondi. There is a long fortified ridge between the road one turns off of to get to Anegondi and the Tungabhadra. This is covered with old military structures from the post-Vijayanagara period. The buildings in this area employ a construction method not seen in Vijayanagara, which involves walls of very crude looking, smallish, undressed granite stones. 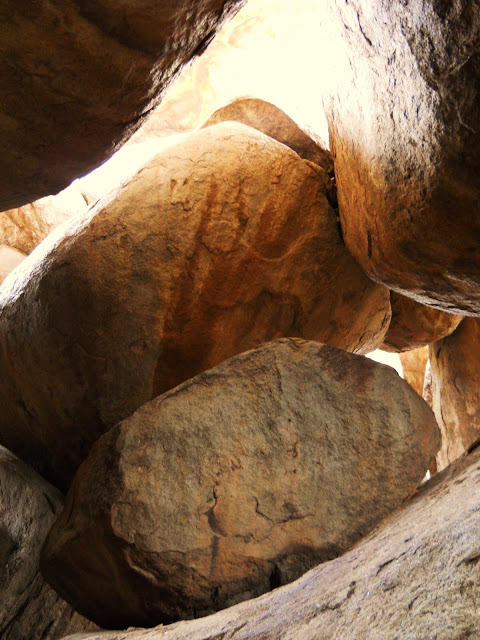 The interior of a great boulder mound near the old barracks. In this case, the individual rocks are not packed so tightly that the spaces between them are totally cut off from the outside, leading to interesting lighting conditions (which, unfortunately, my camera is only barely able to capture). 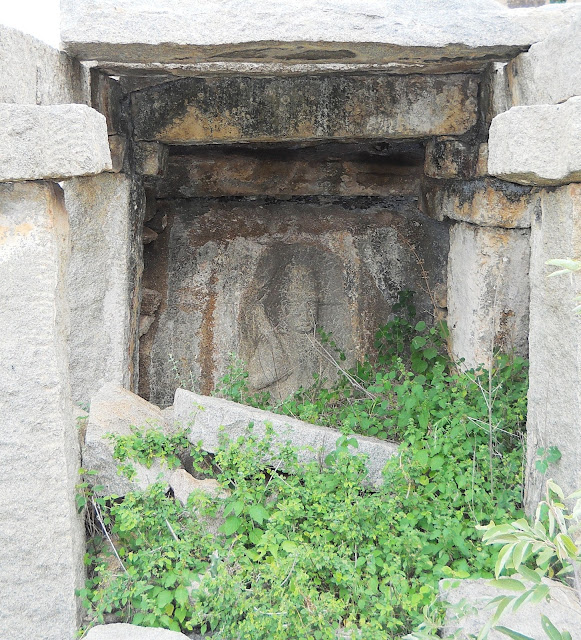 A faint, weather worn carving, possibly of Shiva. This was in a small collection of ruins on the side of a hill northeast of Anegondi. The ruins looked like they dated from the post Vijayanagara period, and that they hadn't received any attention from the Archeological Survey of India. I don't remember there being the usual signs which announced that the ruins were protected monuments. 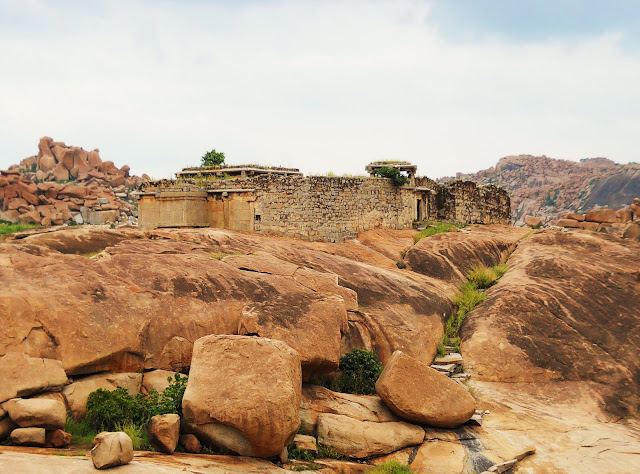 The creepy forgotten temple of Anegondi, as viewed from about where I took the last picture. I've never been able to find any information on this temple at all, and as far as I can tell it receives almost no visitors. There's only a very faint trail that leads to it. The building is architecturally quite peculiar. It doesn't have a tower, and is mostly made of smaller granite pieces, with the individual stones getting smaller and smaller the higher up they are. However, the portion at the left is totally different, and made of much more heavily worked granite masonry with pilasters. It's almost as though the builders of the temple had originally thought that they would make the whole structure out of the larger masonry blocks, but gave up on that after a little while and decided to build the rest in a cheaper, easier, and uglier style. 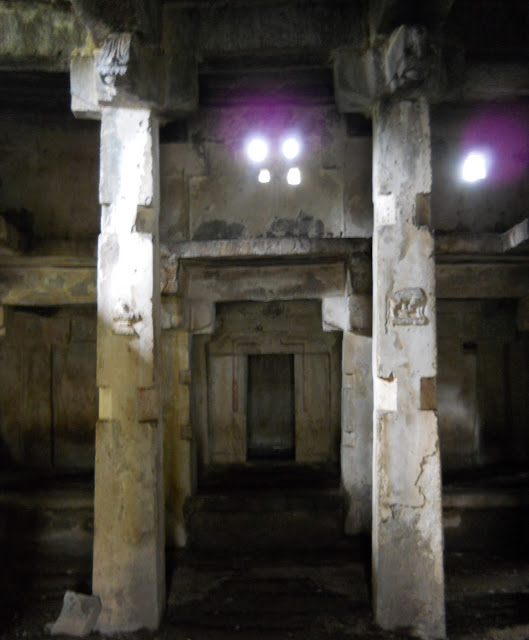 The creepy and not at all aesthetically pleasing interior of the temple. The presences of the small carvings of what seem to be a Shivling and a bull indicate that the temple may have been dedicated to Shiva. It was probably built by the later-day rajas of Anegondi, who traced their lineage back to the rulers of Vijayanagara. Though the temple retains some of the features of the vastly more spectacular Vijayanagara places of worship, the overall impression I got from the building was that it was made by a people who had fallen on very hard times, and in terms of their artistic skill had retained only barest trace of what their more illustrious forbears were capable of...rather unsettling. 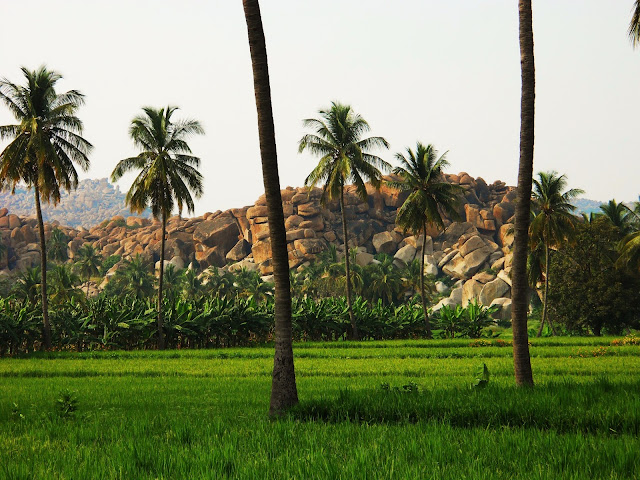 Looking across sugarcane, towards a banana plantation, with a big boulder mound  behind it. This was one of the few times on this particular day that I had something approaching actual sunlight. After my first full day in Hampi, the weather took a turn for the worse, at least as far a photography was concerned. The sky was usually either overcast, or very very hazy. 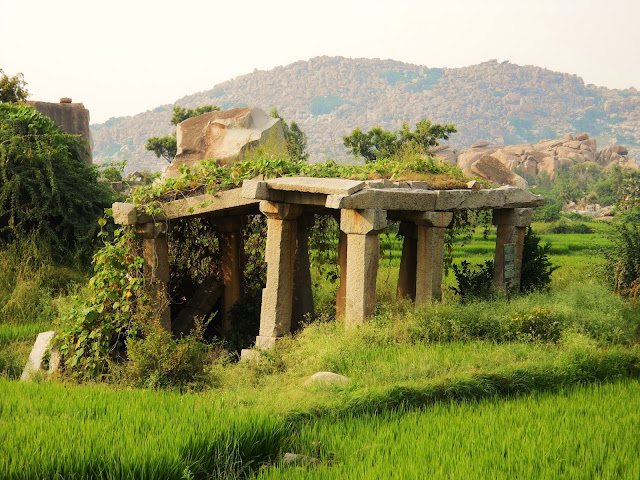 The ruins of an old pavilion. I came across this as I was walking beyond Anegondi, in search of some prehistoric rock-art, about which there was much signage, none of which told me where I actually needed to go. Still, I would up exploring far out into the countryside north of the Tungabhadra, which in terms of scenery is maybe the most beautiful part of the greater Hampi region  that I clapped eyes on. 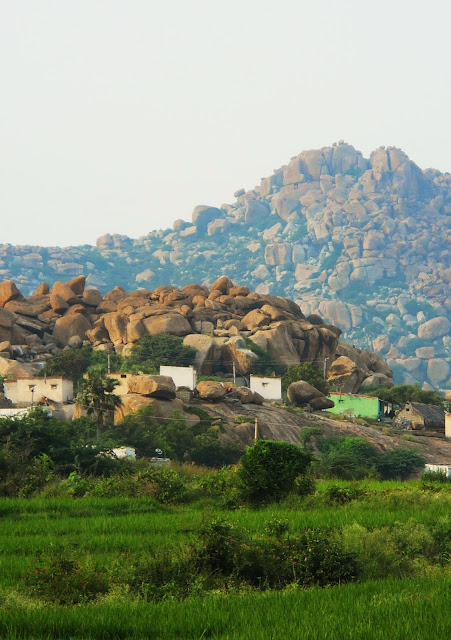 A small village built on rocks, with one of the very tallest boulder mounds in the area in the background. Few tourists seem to come this far out from Hampi, and the countryside has a much more unexplored feel. It's usually fairly easy to tell how far off the beaten path you've gone by the weirdness of  the looks the locals give you. 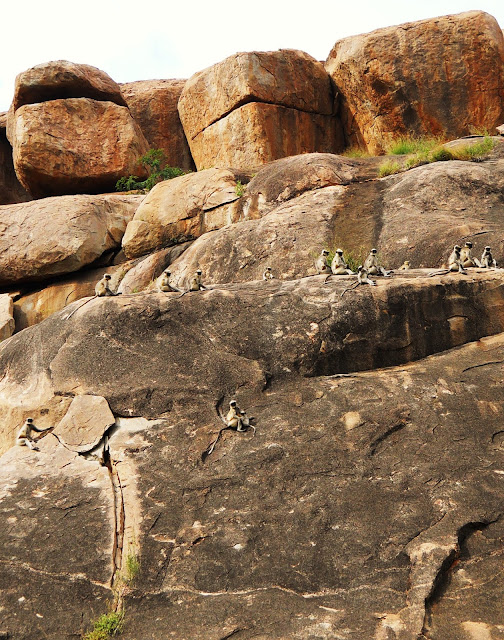 A picturesque band of Languors on the side of a granite slope. 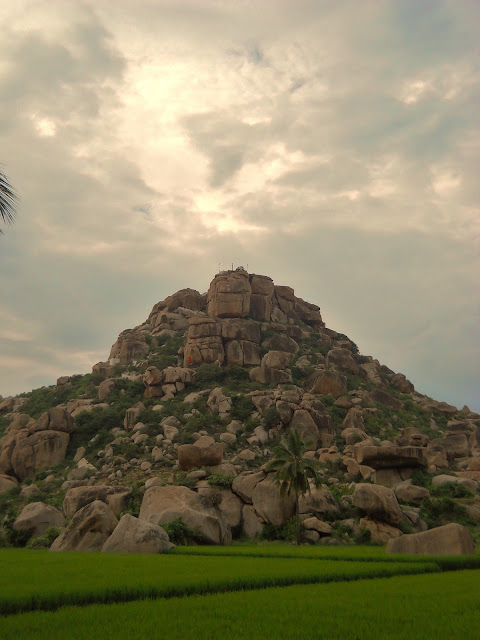 Anjaneya Hill. Regarded as the birthplace of Hanuman (Anjaneya being another name for him), the hill is one of the most prominent and easily recognizable features of the landscape around Hampi, and is visible from virtually any significant elevation in the area. It's a major pilgrimage site, and a staircase leads up to a small shrine on its summit. 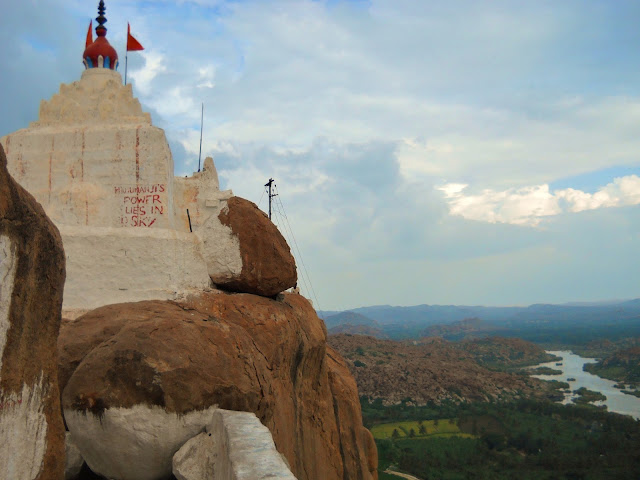 The small shrine to Hanuman at the top of Anjaneya Hill, where a priest endlessly recites verses from the Ramayana while gangs of unusually cheeky monkeys  terrorize urban pilgrims and steal things. The view from the top of the hill is one of the best in the whole area.

Sign announcing the birthplace of Hanuman, next to the shrine on Anjaneya Hill. 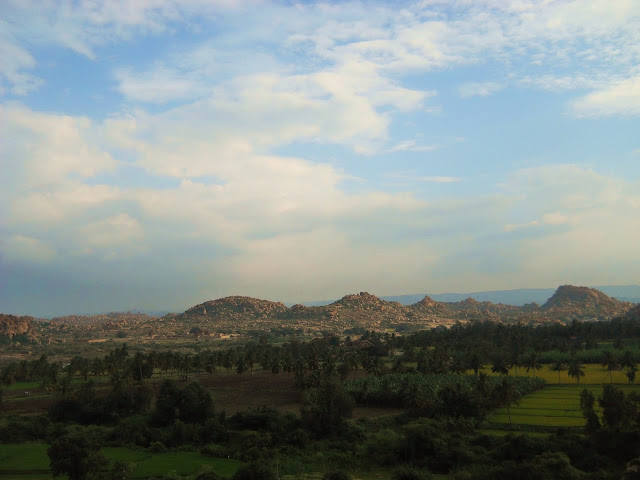 A view towards the south on the way down from Anjaneya Hill, towards distant boulder mounds in a short-lived pool of direct sunshine. 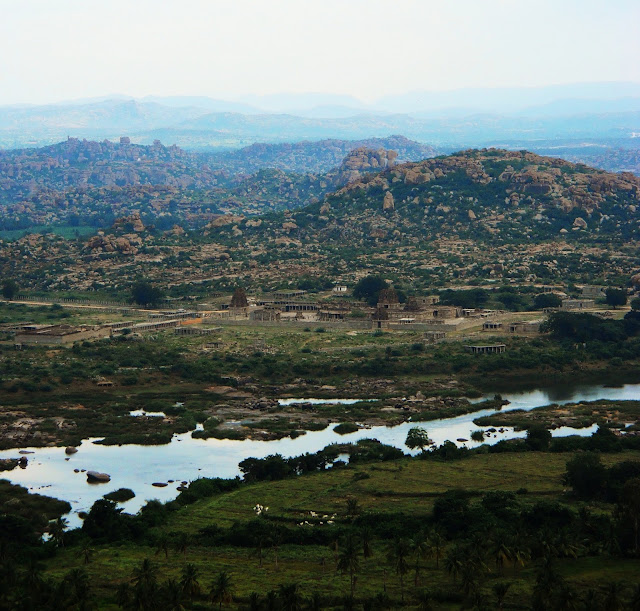 A view of the Vittala temple complex and the Tungabhadra from the steps on the way down from the summit of Anjaneya Hill. 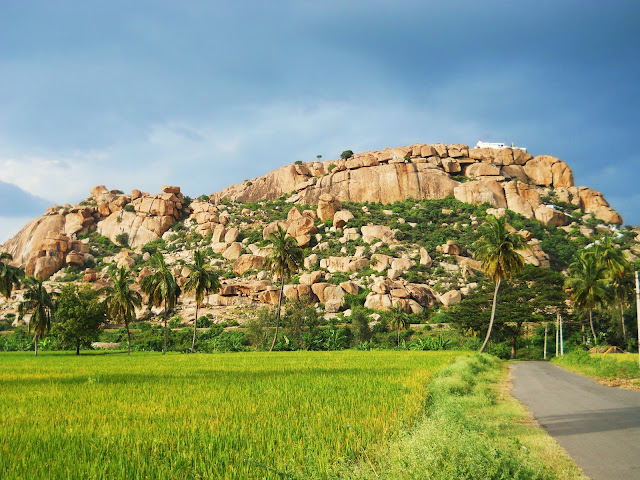 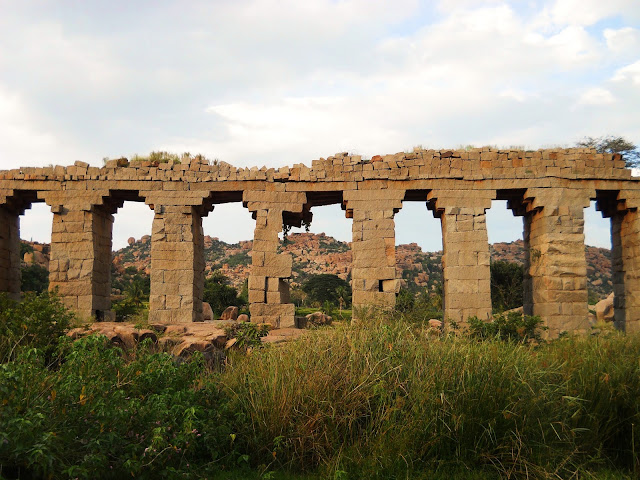 Bukka's aqueduct, a remnant of Vijayanagara's old hydraulic system, which I passed on my way back to Hampi bazaar from Anjaneya Hill. It looks like the center of the span is about to collapse any second.

Bukka's Aqueduct is next to the turnoff to a small, surreal, settlement called Virupapur Gaddi, which is entirely devoted to catering towards foreign backpackers. On the other side of that settlement is a ferry, where one can get a coracle back to Hampi Bazaar.

There is much more to see in Anegondi itself, and indeed in the whole, huge, region north of the Tungabhadra, where the granite hills march on and on. Tourism does not seem to reach much further than the north bank of the river, and out in the countryside there would seem to be mile upon mile of virtually unexplored granite....hopefully, someday, I'll be able to go back.... 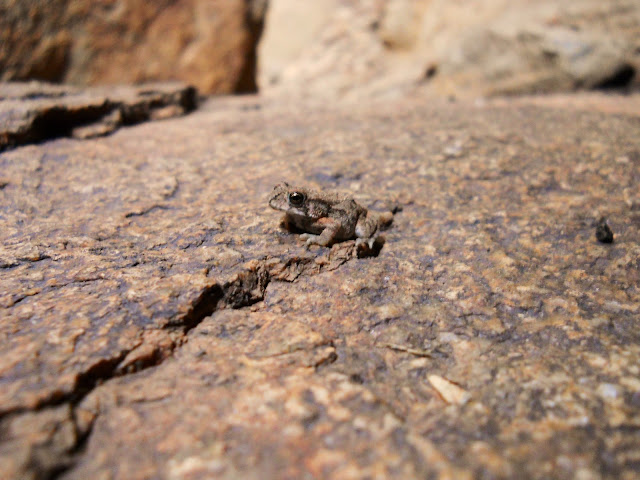