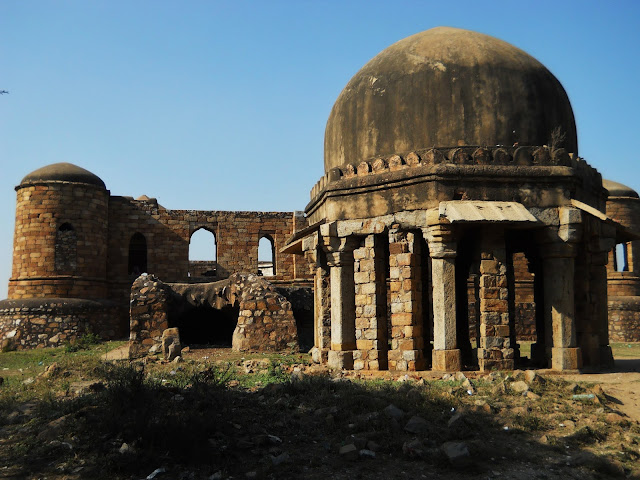 The Sultan Ghari, Delhi's first Islamic tomb, and one of it's most obscure monuments. It was built in 1231 for one of the sons of Iltutmish, the third ruler of the Mumluk, or Slave, dynasty of the Delhi Sultanate. The tomb was constructed before most of the trends that are now associated with Indian Islamic funerary architectural came into their own, the result of which being that the design of the tomb is unique among Delhi's monuments.The domed structure in the foreground is a much restored cenotaph for one of Iltutmish's other sons. There were apparently once two cenotaphs on either side of the monument, though the other one no longer exists.

So, after quite a long while, here's another blogette:


The Sultan Ghari is not easy to find. Going southbound on the Delhi Metro Yellow Line, you get off at Badarpur, the next stop after Qutb Minar. From there, you have to take a rickshaw towards Vasant Vihar. The tomb is located about a kilometer from the road, in a patch of rather hostile, thorny, woodland.  There is a sign for it on the side of the road, though it's very small, and the lettering is faded, so that if you weren't looking right at it, you'd miss it.

The tomb itself is at the center of an extensive, though now neglected and overgrown, complex of ruins, which date anywhere from the 14th to the 18th century. The ruins are notable in that, unlike the majority of the genuinely old buildings in Delhi, which are overwhelmingly old tombs, mosques, gates, and defensive structures,  constructions which in their own day would have been monuments, the ruins around the Sultan Ghari are mostly residential buildings. They are the sorts of places where people would live out their daily lives.

That being said, other than the Sultan Ghari itself, the ruins in the area are in a sad (and even repulsive) state of neglect. It appears that a major drive was made in the early 2000s to renovate and clean up the complex. Many of the ruins underwent restoration, and a trail was built that connected all the major sights in the area. But now the trail is impossible to follow, the ruins are obscured by thorny vegetation and are the abode of wild pigs and stray dogs, and, what's worse, the local villagers now use their heritage as a latrine. A number of signs were put up by the Archaeological Survey of India, but many of these have been blacked out and defaced. Though an attempt seems to have been made to turn the complex into a park and tourist attraction, it was not maintained, and now many of the ruins in the area feel like they were never rediscovered. 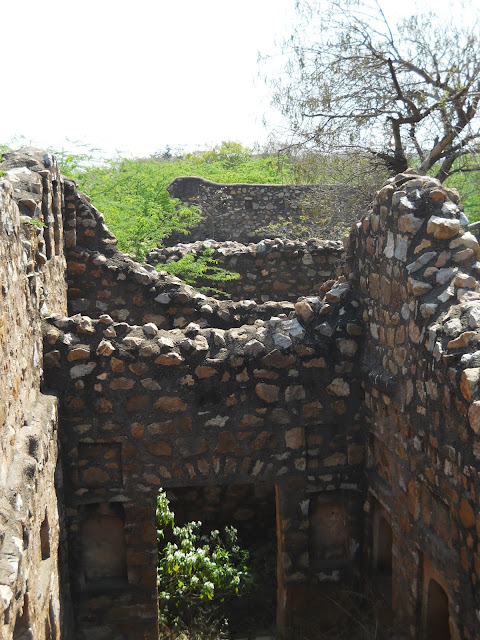 Ruins of houses in the Eastern Settlement, which is an entire village, dating from the mid to late Moghul period. A sign (which had been smeared with white paint to make it illegible) said that the ruins here were from the 17-19th centuries.  In comparison, the next door Sultan Ghari is from the early 13th century. The ruins, which also include a number of structures from the Tughlaq period, therefore span practically the entire period of Islamic ascendancy in India. 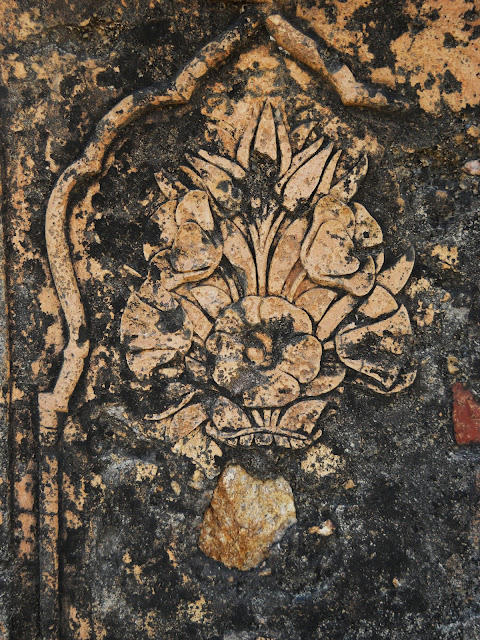 Fading floral pattern. One of the few decorative elements on the ruins of the eastern settlement that had withstood the test of time. Otherwise, the exteriors of the buildings had been largely stripped away, exposing the underlying rubble construction. 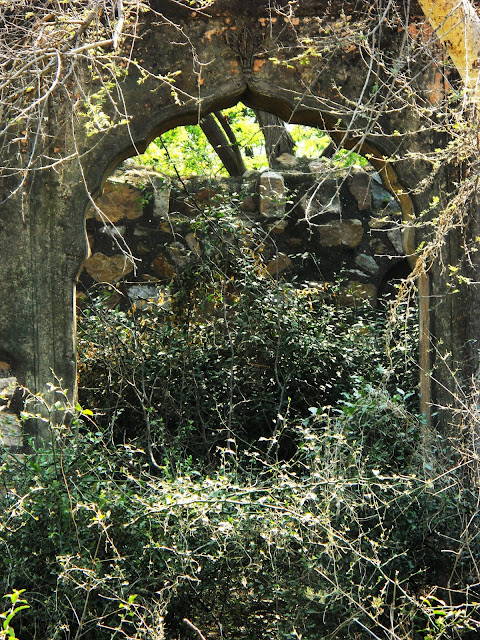 Overgrown, though well preserved, Arch, judging from the architecture  probably from the 17th or 18th century. All of these ruins are hidden in dense, thorny vegetation,  which by itself would make the area difficult to explore. The path through the ruins, which was built in the early 2000s, is now so covered with thorn bushes that it's impossible to follow. You then have to throw rocks at huge wild pigs and stray dogs. Then, when you're in the ruins, you realize that they're all covered in shit...yes, what's claimed to be the oldest surviving residential architecture in Delhi is being used as one giant outdoor toilet by the locals. The Archaeological Survey of India did put up a couple of signs explaining the significance of the ruins, but these have mostly been  smudged with paint or torn down. In a very real sense, the infrastructure the ASI put in place to make the complex a tourist attraction has already reverted to ruin. When I saw the path that the ASI had built in the early 2000s, such was its condition that I simply assumed it was several centuries old....It makes one wonder how anything of real antiquity can survive at all. 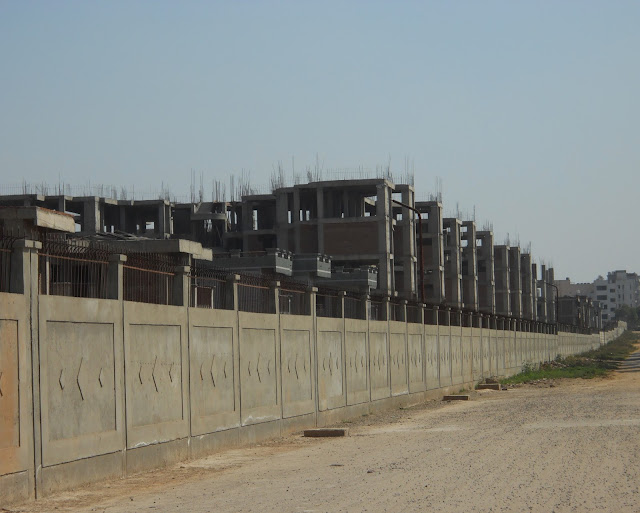 Vast, hideous, high class apartment complex springing up just south of the ruins. I can't decide what's scarier,  the ancient, silent, long abandoned villages, or the nearby housing complex that seemed to grow taller even as I passed by, like some cyclopean fungus (no exaggeration). The open spaces of South Delhi are being rapidly eaten up by monstrous, soul-crushing apartment complexes. Given that this is just across from the ruinous settlements around the Sultan Ghari, I'm sure that a number of ancient building were destroyed so that this place could go up. 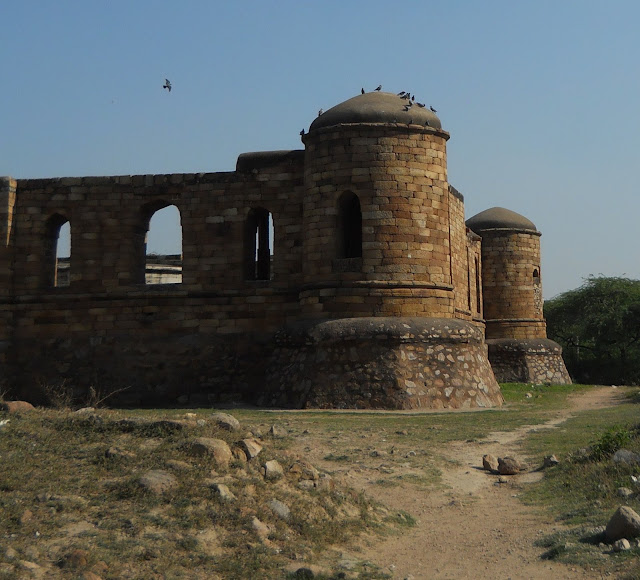 A view on the Sultan Ghari itself, the center of the complex, and the only building that's being properly kept up. It serves as a shrine for both the Moslems and Hindus living in two nearby villages, who, among other things, come there to pray for the well-being of their marriages. From the exterior, the building resembles a fortress more than it does a tomb. Apparently as recently as the year 2000 the building was in a state of disrepair...along with the rest of the complex, it was restored in the early 2000s, though in it's case, given that the locals use it regularly for some purpose other than as a toilet, it remains clean and in good condition. 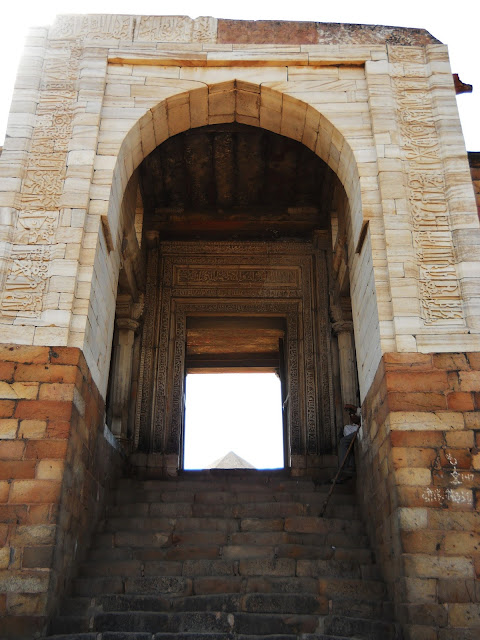 Looking up at the marble gate of the tomb. The Sultan Ghari was built a few decades before the introduction of so-called True, or Roman, arches into India. The arches in the Sultan Ghari are what are known as Corbel Arches, the main difference between the two being that a Corbel Arch, unlike a True Arch, is not entirely self supporting, and needs to be set inside a fairly thick structure to begin with in order to keep standing. It was the introduction of True Arches that allowed the various Islamic rulers of India to build their most iconic structures, such as the Taj-Mahal and the Delhi Jama Masjid. Arguably the biggest difference between Hindu and Islamic Architecture is the absence in ancient and medieval Hindu buildings of free standing arches (there are, of course, numerous Hindu buildings from after the 16th century, in Rajasthan in particular, that do employ the principal of the Roman Arch, though the architecture in these cases is derived from the Muslims, and is frequently referred to simply as "Moghul Architecture".) However, in the Sultan Ghari, and also in other early Delhi Sultinate structures, such as the Qutb Minar, the differences between Hindu and Islamic building methods had yet to establish themselves. 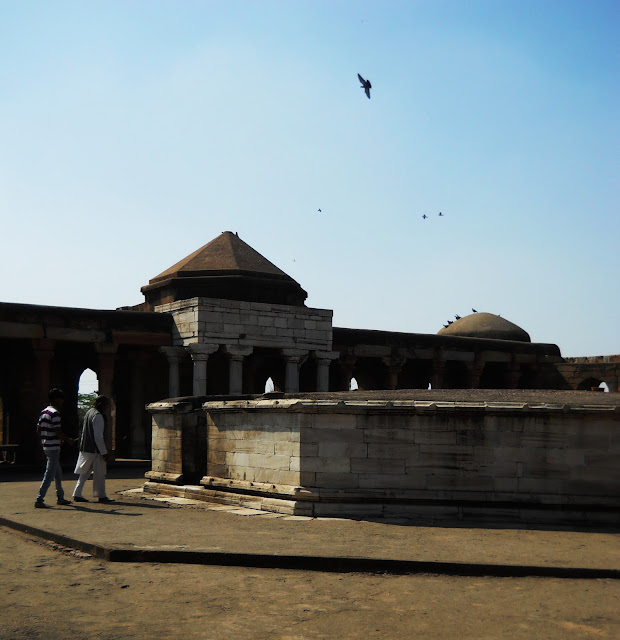 The courtyard of the Sultan Ghari. Not the greatest of photos, but this shows the weird octagonal slab which serves as a roof for the crypt of the Sultan Ghari, in which is the grave of Nasiruddin Mahmud, the eldest son of Illtutmish of the Mamluk Dynasty and a ruler of apparently no real distinction, along with the graves of several unknown persons. The white columns in the background were not part of the original building and were added in the 14th century, during the Tughluq Dynasty. Those two guys were going to pray in the crypt. 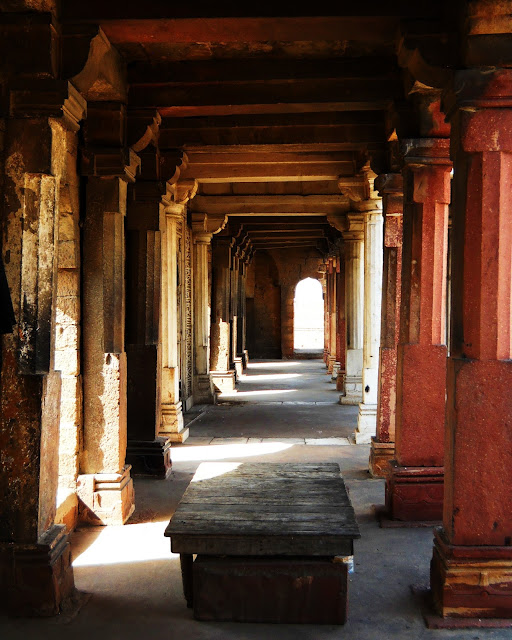 This is at the Mecca facing end of the Sultan Ghari, which also serves a mosque. The columns here seem to have been either copied from Hindu temple architecture, or else taken directly from Hindu temples. The early Islamic rulers of India were not above incorporating pieces of temples they had destroyed into their own buildings, the most striking example of this being the defaced Jain Temple columns that were used in the construction of the Quwwat-Ul Islam Masjid, Delhi's first Mosque, next to the Qutb Minar. 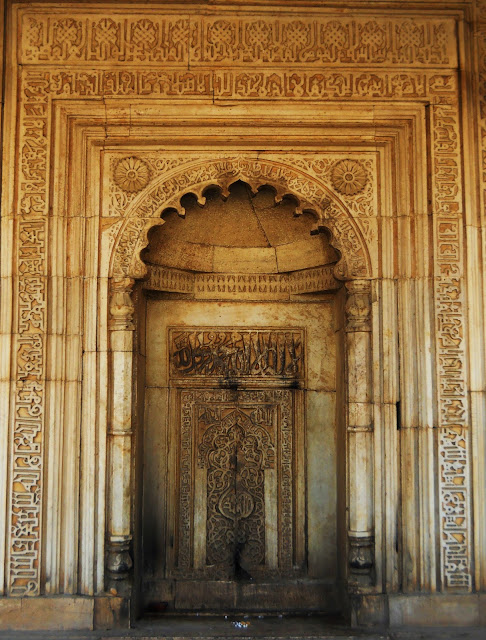 A view on the spectacular prayer niche of the Sultan Ghari. 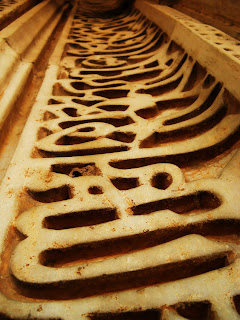 Close on the Arabic inscription. 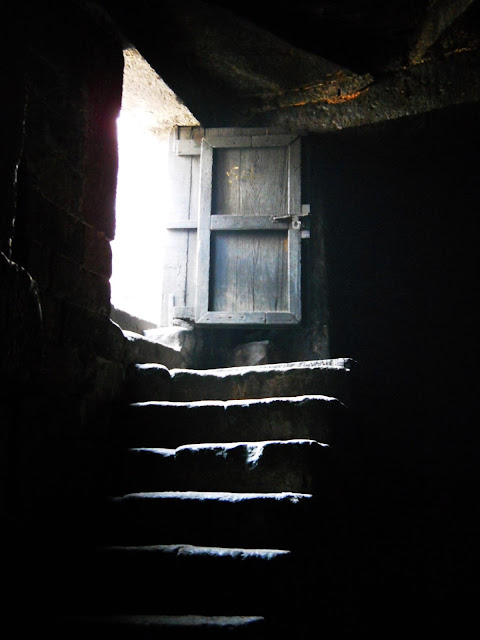 The stairs that lead down into the crypt. Sultan Ghari means "Sultans Cave," the cave being the large, dark, atmospheric, chamber underneath the courtyard that houses the actual graves. The roof of the chamber is held up by a number of great big columns, again, rather like something one might find in a Hindu temple. The arrangement is very much unlike any other Islamic tomb that I have ever seen, and seems to be the product of a period in which the Islamic rulers of India looked just as much towards Hindu building methods as they did towards Persian and Byzantine ones. 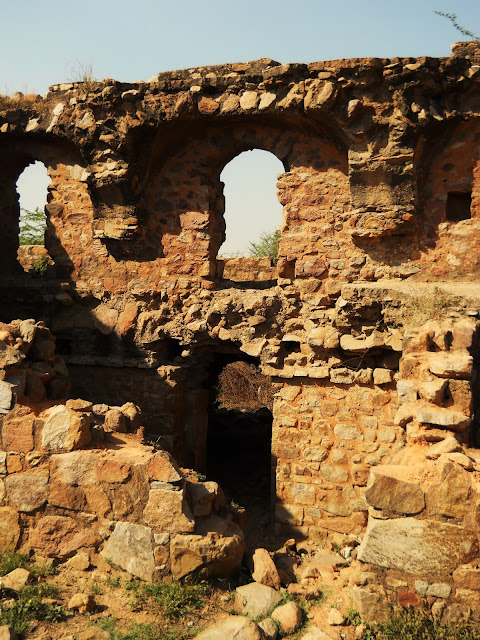 Large ruins just north of the tomb, in the Western Settlement, yet another whole ancient village that would be great to ramble about in if the locals didn't use it as a latrine. 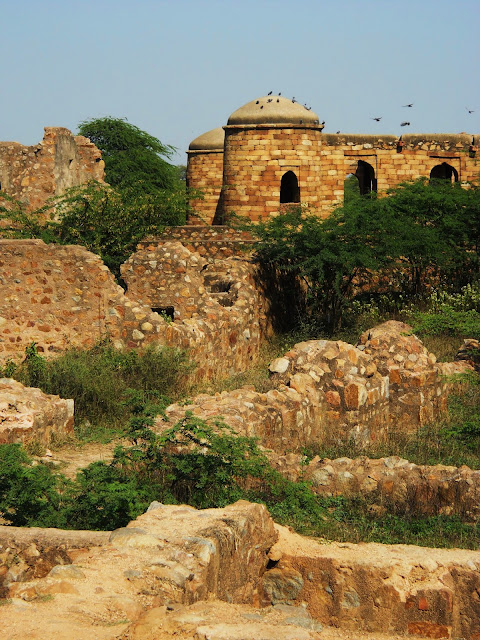 Turrents of the Sultan Ghari as viewed from the Western Settlement. 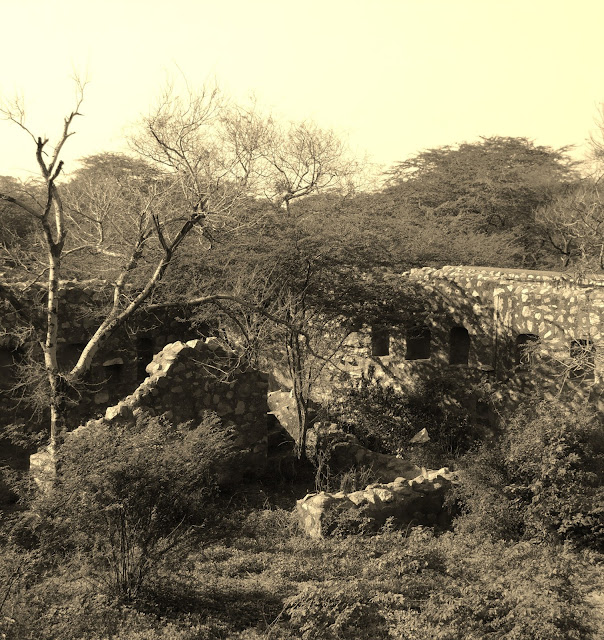 Black and White view on a 17th or 18th century Haveli. Lying somewhat apart from the other groups of ruins, and hidden by trees and thorn bushes, the Haveli was rather less shat upon than the other residential structures in the complex. It was also sufficiently overgrown that I only know it was there once I was right on top of it. The building, at least according to an Acheological Survey of India sign that had been inexplicably torn down and was lying face up on the ground, was the house of a landowner. Being the largest single residential ruin at the site, it was clear that someone important had lived there. 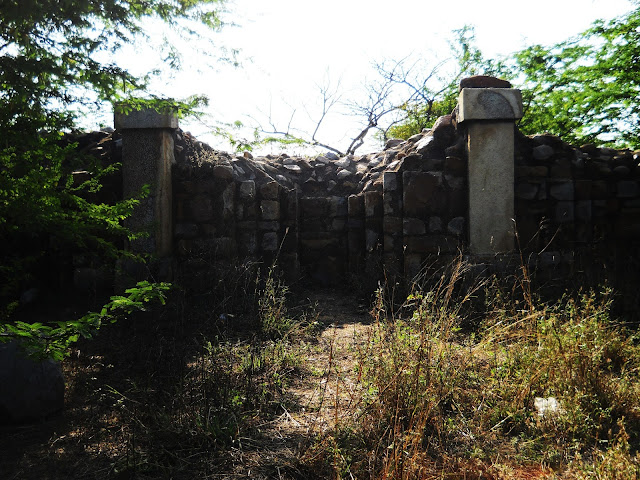 The last few remnants of a 14th century Tughluq period Mosque, built during the reign of Firoz Shah Tughlaq, one of Delhi's greatest builders. Not much of this structure remains, despite it's being from about a century later than the Sultan Ghari, other than the prayer niche here and a few arches. It's not far from the Sultan Ghari, though, again, it's so obscured by vegetation that you would only really notice it once you were right on top of it.

The Sultan Ghari is not listed in the Lonely Planet, and indeed, despite being Delhi's first Islamic Tomb and therefore an immensely historically significant building, I've never seen in mentioned in any Delhi tourist literature. Of course, just a few years ago, before the Metro and before South Delhi's fungus-like spread, the monument would have been well beyond the fringes of the city. But now, it appears to me that the monument remains in obscurity largely because the Archaeological Survey of India has seemingly lost interest in its upkeep. And while the local villagers have a stake in keeping the Sultan Ghari itself in good condition, they evidently don't give a damn about the rest of the complex.

It's a place that I was glad to have visited once, though I don't plan on returning until the ruins stop being used as toilets.