The Exuberant Rickshaws of Bangladesh 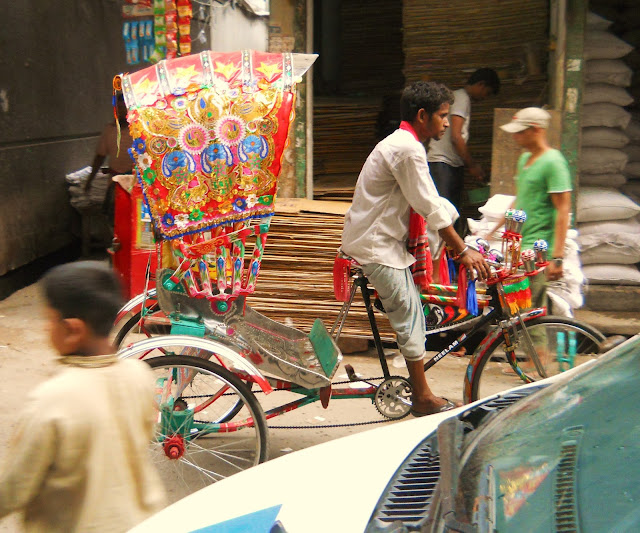 A common sight in Dhaka

In May, 2015, I traveled across Bangladesh, crossing the border from West Bengal and reentering Indian via Dawki in Meghalaya. The country left many impressions, but one of the strongest was made by its cycle rickshaws, which were decorated as brightly, colorfully, and crazily as possible.

Cycle rickshaws are an absolutely vital part of everyday life in Bangladesh, much more so than any other place I've been. In some areas, they are the primary means of getting around, and streets are often choked with them. Wandering in Old Dhaka often means negotiating whole traffic jams consisting of nothing but rickshaws. Often, one will be on a major street with no motorized traffic at all, with the sounds of horns and combustion engines replaced by the much less obnoxious noise of hundreds of bicycle bells.

It's often said that Bangladeshi rickshaw art is representative of the dreams of the common Bangla man. If so, his dreams seem to consist of everything from film stars, to giraffes, sports cars, Chinese dragons, the Taj Mahal, and Tigers gambling with each other. If those are his dreams, then the common Bangla man is a bit of an eccentric, but an engaging one.

Given that the cycle rickshaws are such an important means of transport in places like Dhaka or Sylhet, the geography of the street in Bangladesh is really very different than it is in India. In India, in a place like, for example, Old Delhi, a traffic snarl will consist of dozens of private cars, bullock carts, trucks, buses, auto rickshaws, and the occasional cycle rickshaw, all of them looking rather beat up, dusty, and drab. In Old Dhaka, a traffic snarl will often consist mostly of cycle rickshaws, and though they might be beat up and dusty, they're just too exuberantly decorated to be drab. In Dhaka, one might be in some of the poorest, most squalid areas of the city, where the lives of the people who there are undoubtedly unbelievable struggles, but the cycle rickshaws will nonetheless be just as jolly and crazy as ever.

Now every time I'm in Delhi, I have to say, I miss Bangladesh's Rickshaws. 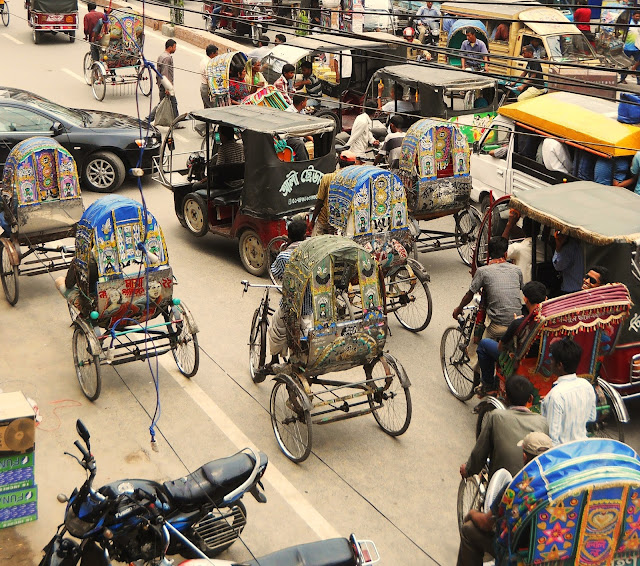 Street scene in Rajshahi, eastern Bangladesh. This city is where the practice of decorating rickshaws began in the middle of the 20th century. The larger, auto rickshaw-like vehicles are electric powered. Note the imported private car in the upper left hand corner. Bangladesh doesn't have much in the way of an indigenous automotive industry. Most of the trucks and buses are either Indian or Japanese.  The upper classes import vehicles for their own use, and in larger cities, when one does see private vehicles, they tend to be surprisingly nice ones. 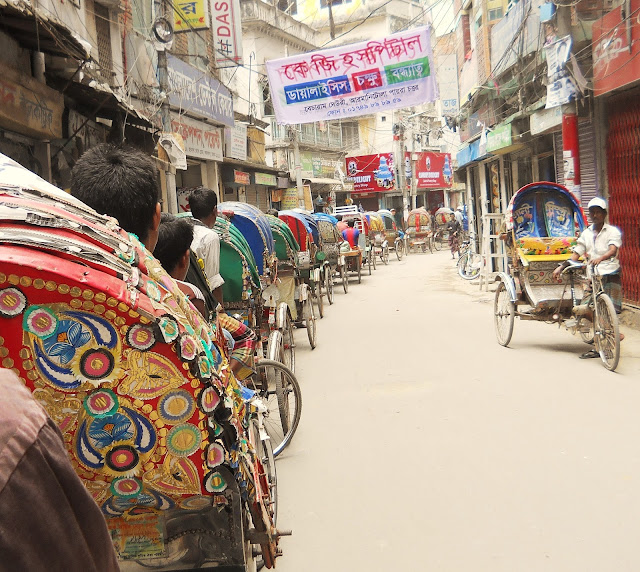 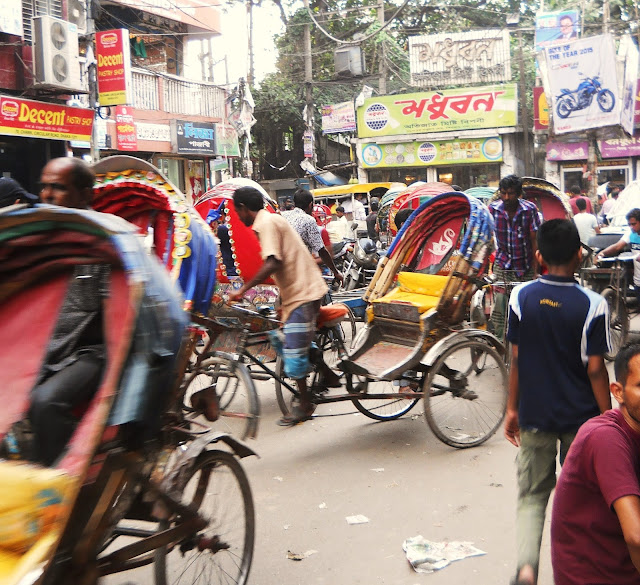 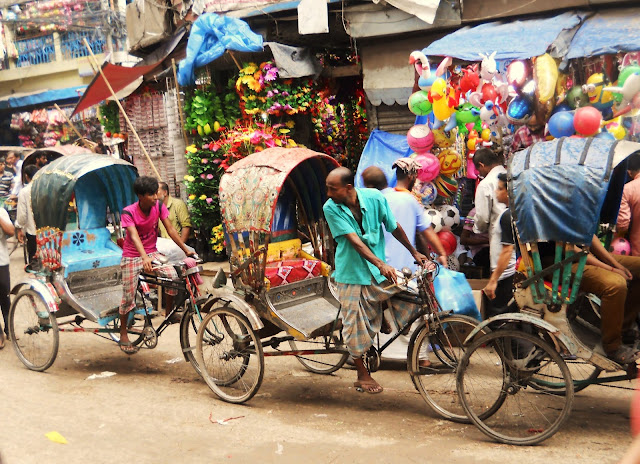 This was just after a collision. As far as I can tell, rickshaw pullers in Bangladesh don't care too much if they bang into each other. On several rides, my drivers would take almost every possible opportunity to ram the rickshaw ahead of them, and the arguing post collision was minimal. The drivers rarely had the opportunity to go fast enough to cause damage. 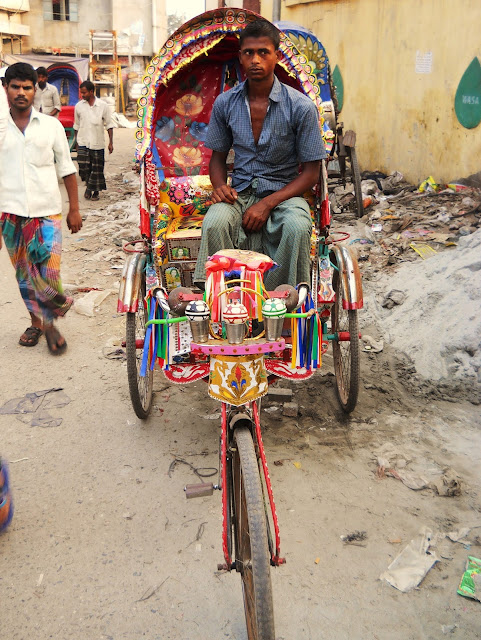 A rickshaw driver in a poorer neighborhood wondering why he's getting his photo taken. 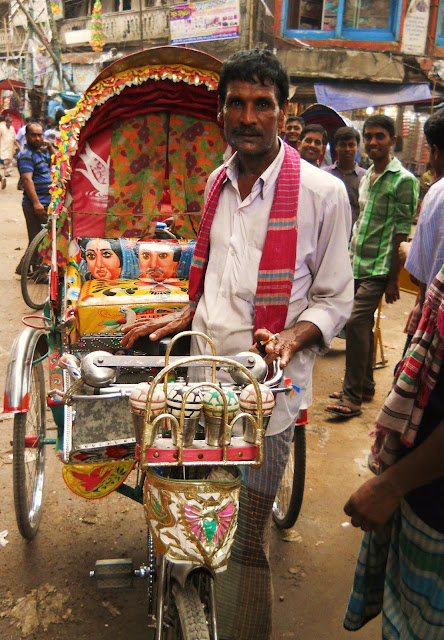 I took a whole bunch of photos of this guy's rickshaw. Note the mysterious multicolored-soccer-balls-in-cups like things in front of the handlebars. After taking a ton of photos of his ride, and causing a big scene on the street doing it (as evidenced by those four smiling faces over the drivers shoulder....foreigners are still pretty rare in Dhaka), I asked the man how much he would charge to take me where I was going. He quoted a price about four times what it should have been, so I walked away, though I felt kind of bad about it after taking so many pictures. 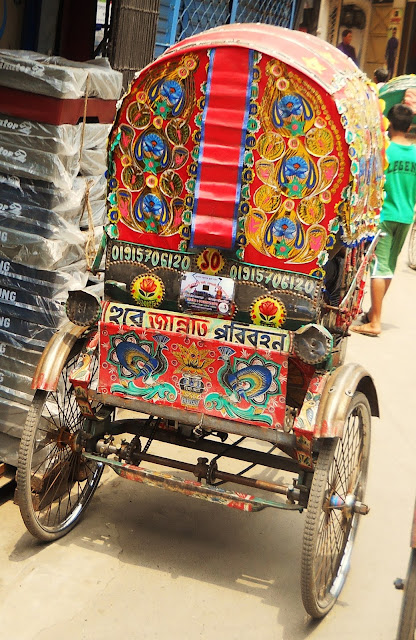 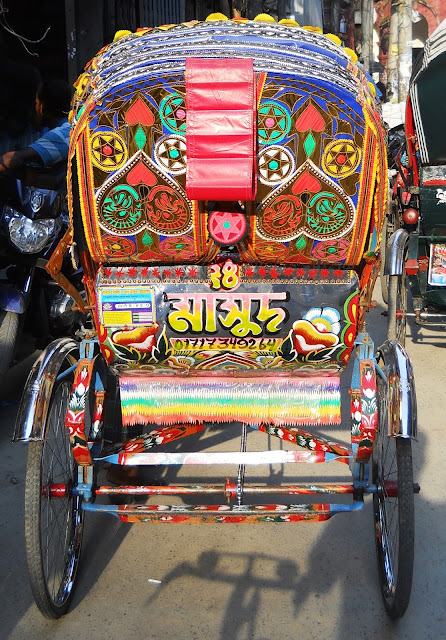 Near the Hindu quarters of Dhaka's Old City 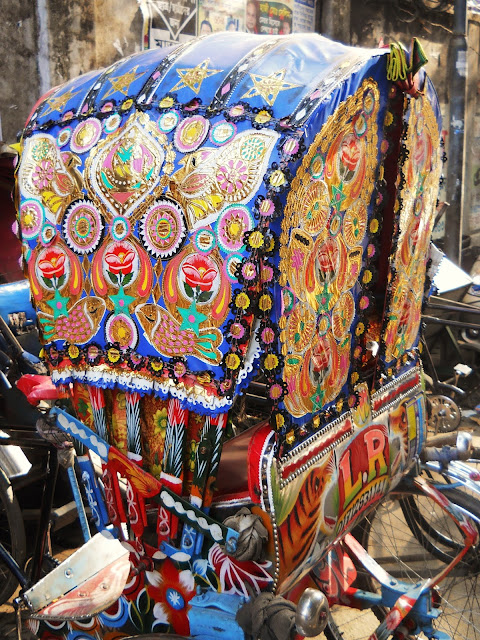 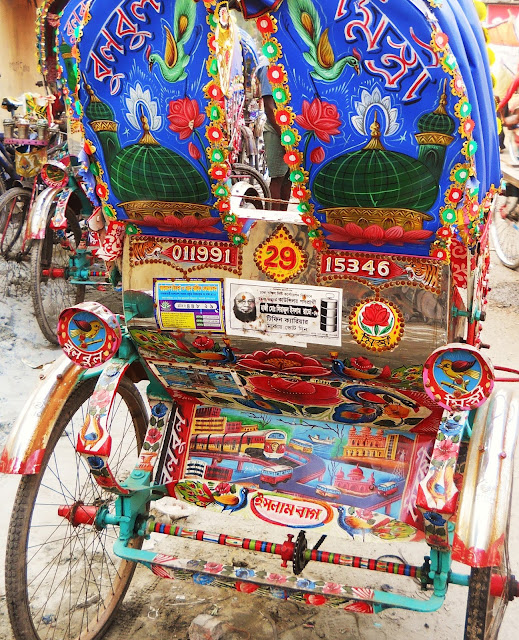 A single rickshaw depicting everything from mosques to peacocks to government buildings to trains...plus advertisements.... 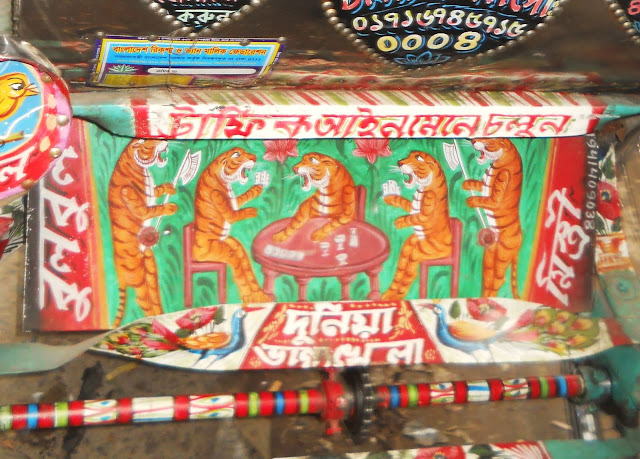 A common motif one finds on Dhaka's Rickshaws: Tigers gambling and being attended upon by servants, who are also tigers, with fans. What's the story here? I have no idea... 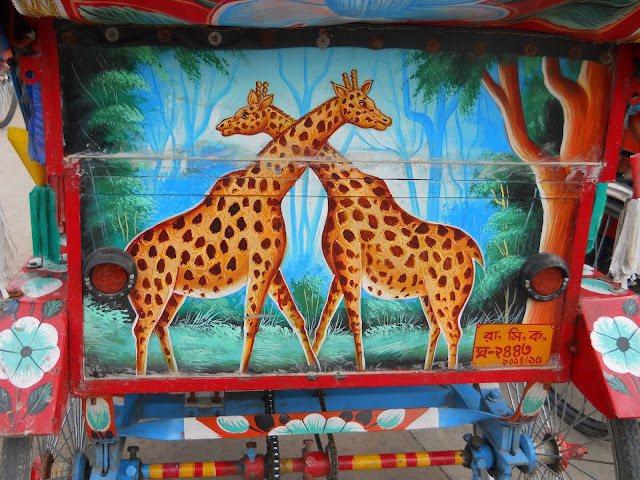 Giraffes on a rickshaw in Rajshahi. In that part of the country, the rickshaws tend to focus more on having one big picture on the back of the vehicle. 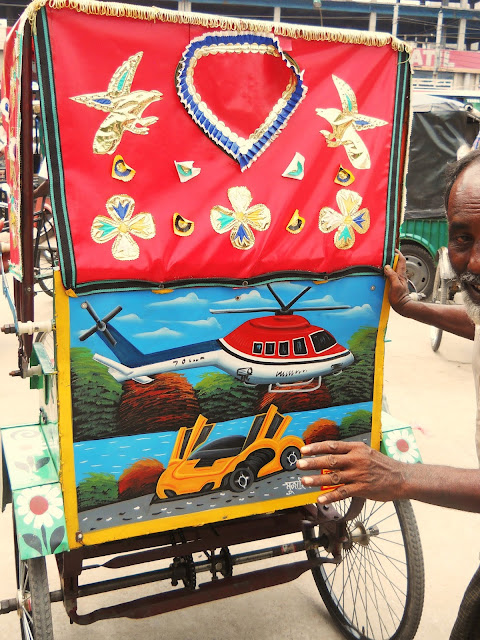 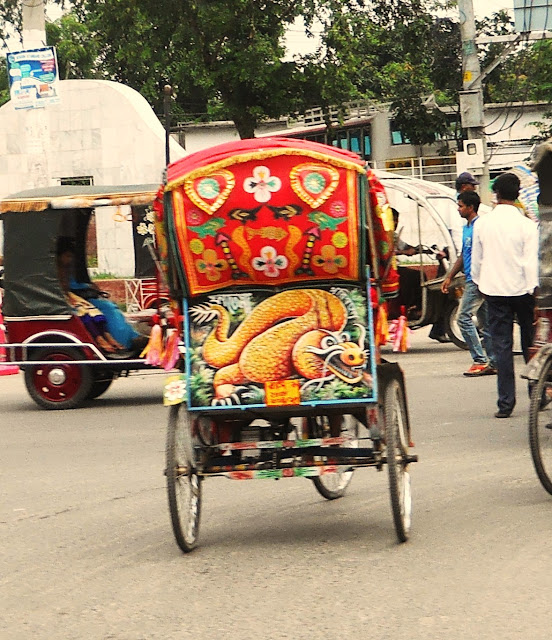 A Chinese Dragon. The rickshaw was in the distance, so I had to zoom in. Rajshahi 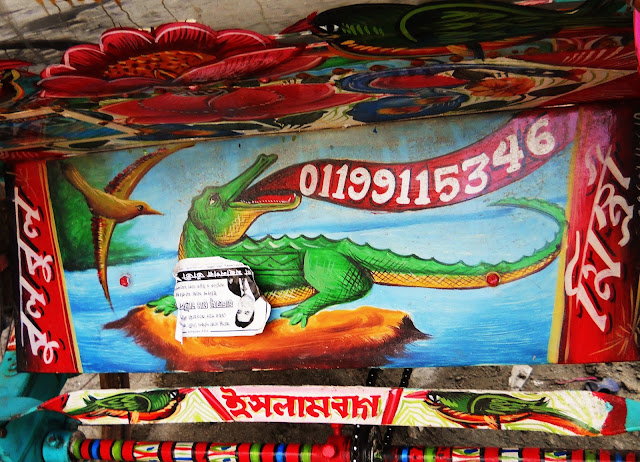 This was in Dhaka. A crocodile giving out the owner's number 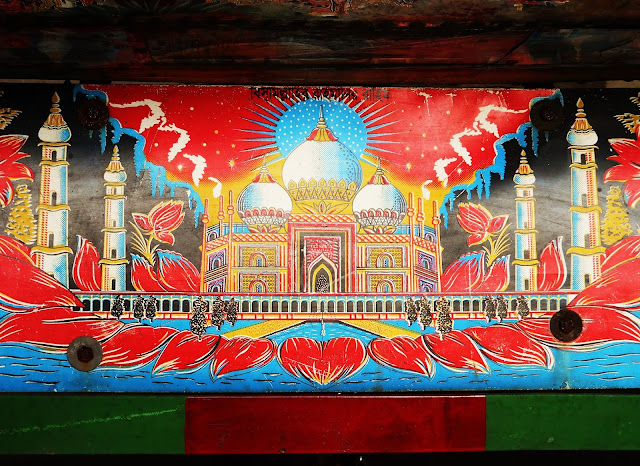 The Apocalypse Taj. Another common motif in Dhaka. It says quite about the local artistic sensibilities: The Taj is so highly regarded, usually, because of the impression of purity it exudes through its sober white marble. The artist here obviously loves the idea of the Taj, but would prefer it with a bit more color....And giant flowers... 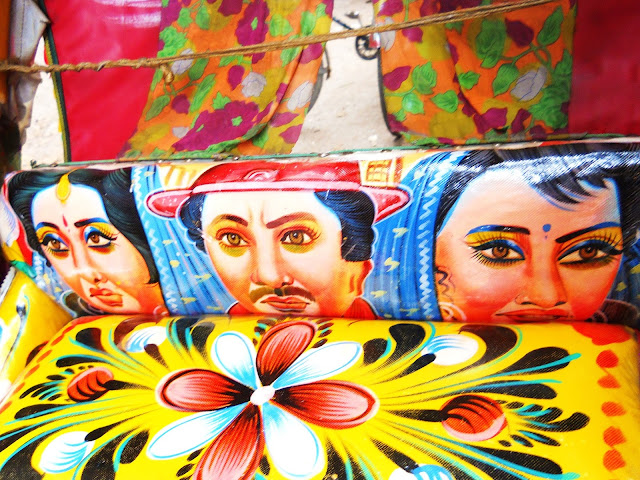 Bangladeshi film stars peering out over a seat 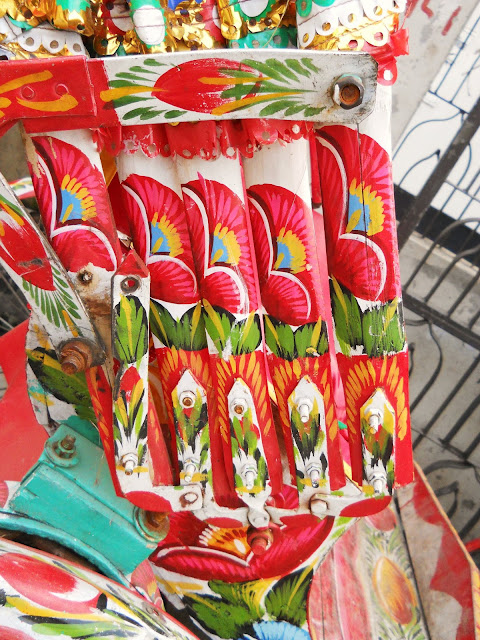 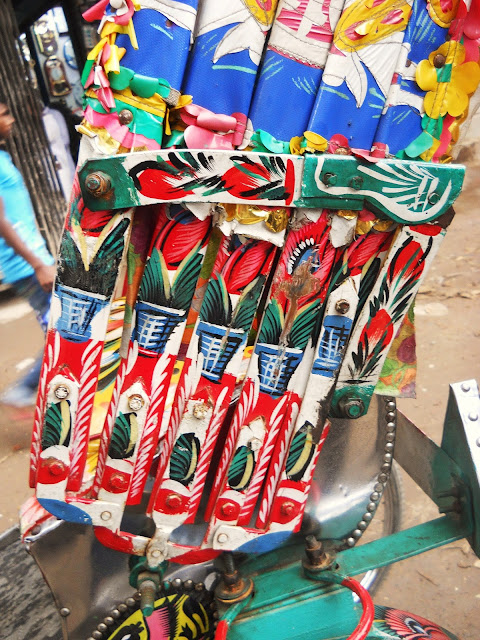 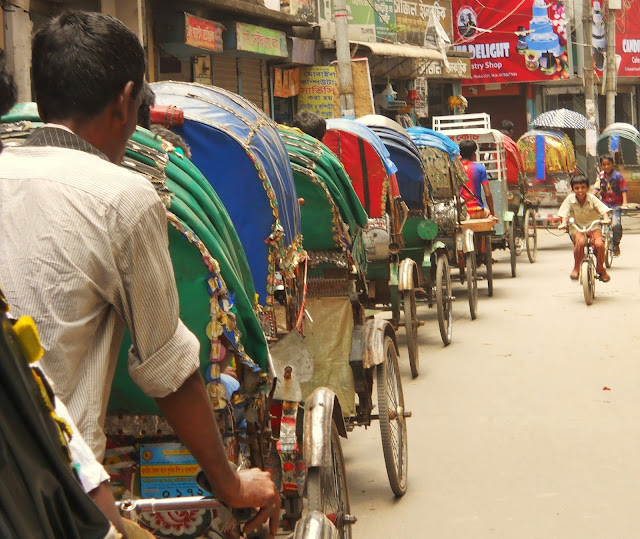 Pedals against the tide