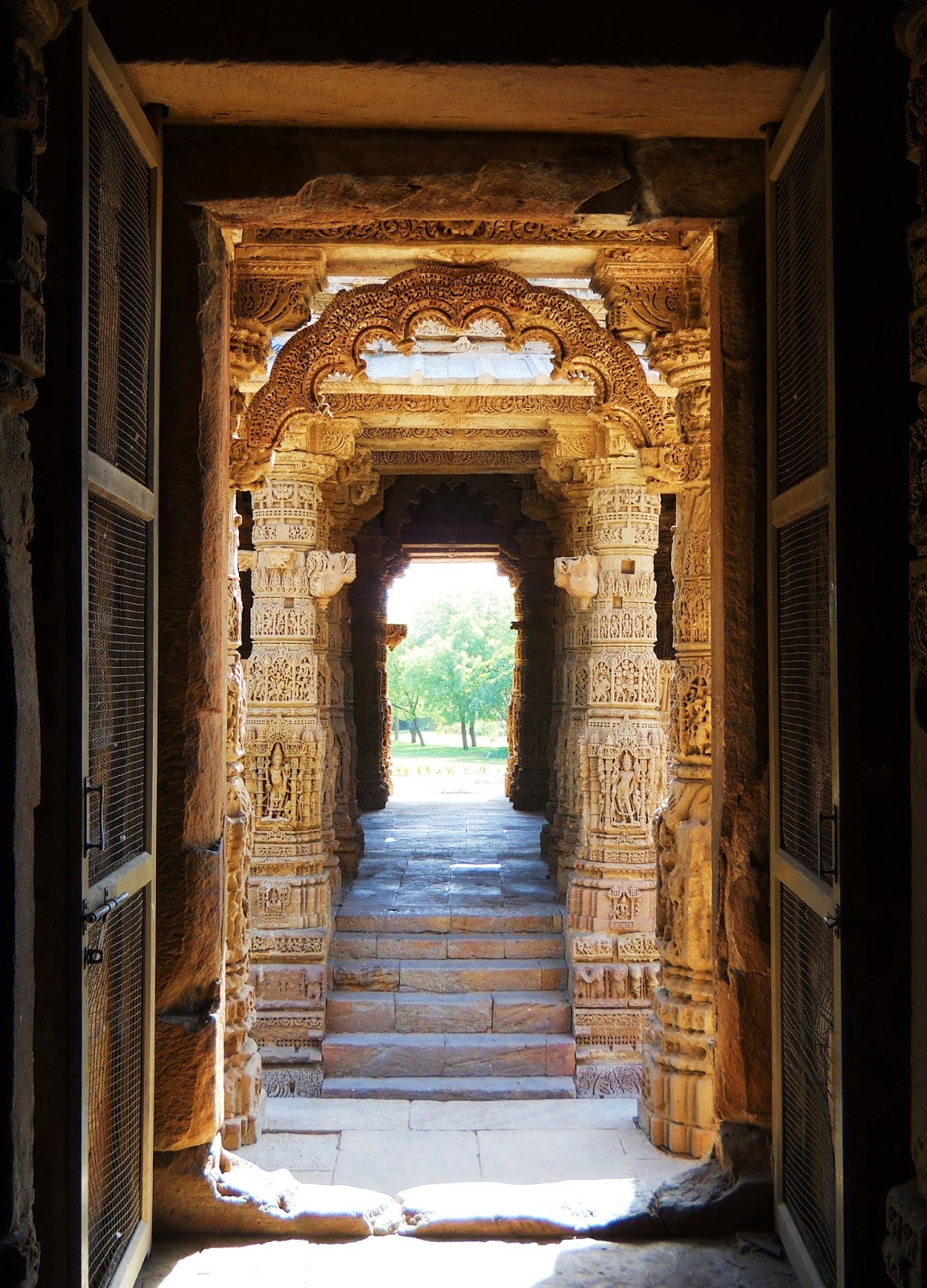 Looking out through the entrance of the Guda Mandap, or Sanctum Sanctorum, of the Modhera Sun Temple.

The Sun Temple of Modhera is, like Rani ki Vav, one of the few remaining architectural splendors left behind by the 10th to 13th century Solanki Dynasty of Gujarat. I made a brief visit here while in transit between Patan and Ahmadabad, spending only around two and half hours in the area (and much of that time was consumed having tea at the Modhera bus stand with a shady though not entirely disagreeable member of the town council trying and not succeeding to hustle me out of  my Swiss army knife...he seemed to be hoping that plying me with free Chai would have the same effect as free alcohol. Anyway.) The stop-off made for a long day of travelling, but it was more than worth it.

The temple was built in the early part of the 11th century by Bhimdev I, the same Bhimdev I in whose memory Rani ki Vav in Patan was commissioned. The temple is dedicated to Surya,  the "solar deity" of the Hindu pantheon, and has rather an unusual layout, consisting of three main components. The first is a large stepped tank with 108 small shrines called the Surya Kund. Here, devotes would engage in ritual ablution before walking up a flight of stairs to the Sabha Mandap, a free standing building that served as a religious gathering space. Beyond the Sabha Mandap is the Guda Mandap, otherwise known as the Sanctum Sanctorum, which was the center of worship within the complex and housed the temple's primary idol. This was a solid gold statue of Surya riding his chariot pulled by seven horses, which was placed in a pit filled with gold coins.The Guda Mandap was designed with such precision that, only just after sunrise on equinox days, a ray of light would shine on the idol.

Frequently one hears that the temple was connected to the Solanki capitol Patan via an underground tunnel, though there is almost certainly no archaeological evidence for this. While guides love to claim that there were underground tunnels below just about everything in medieval India, there are very few places where this was actually the case (Tughlaqbad in Delhi being one of the only places in India, or all of Asia for that matter, that actually did have a hidden escape tunnel, and even that one didn't go on for very long).

Like Rani ki Vav, time has not been kind to the Modhera Sun temple. During Bhimdev I's rule, Gujarat came under attack from Mahmud Ghazni, one of the earlier Muslim invaders of India. During one of Mahmud's campaigns the great Surya idol and the pit of coins were plundered. Later, the Solanki's recaptured and reoccupied the site, but  it was retaken from their Hindu successors, the Vanghelas, after a few centuries  by a later wave of Muslim invaders, the armies of Alauddin Khilji of the Delhi Sultanate, who are said to have destroyed much of the original complex.What one can visit now is therefore only a remnant of the original temple, yet that what little remains is so grand is in itself a testament to the wealth and artistic skill of the Solankis in their prime.

My visit to the site was short, and not at a particularly good time of day as far as the lighting was concerned. Furthermore, I wasn't able to learn much about the temple during my actual time there. I did buy a guidebook, but that proved to be written such awkward English that it was more confusing than useful. The book is in both English and Gujarati, and one can only hope that the Gujarati makes more sense than the English. With such enigmatic statements as: "The level which is seen visibly depicts the unparalleld specimen of the unique scnlptor of the sculptorial specimen of stone carvings and construction which reveals the honours and prestige of being proud and earns the pride of honourable GAURAV VANTI GUJARAT  which at some unfortunate moment has been attacked by bad and evilements and broken damaged the reason for and of which are not yet known so far" (all CAPS and spellings by the author), the guidebook is rather a better souvenir than it is a source of information. I'm sure the writer's English is vastly superior to my Gujarati, but, then again, I'm not going around trying to publish guidebooks in languages I clearly don't have a handle of.

The upshot of this is that my information on the temple is rather limited. Most importantly I haven't been able to find a guide to the temple's magnificent sculptures, which is a pity: I would really like to know the story behind what I was seeing in the thousands of carvings both outside and inside the principal structures in the complex. 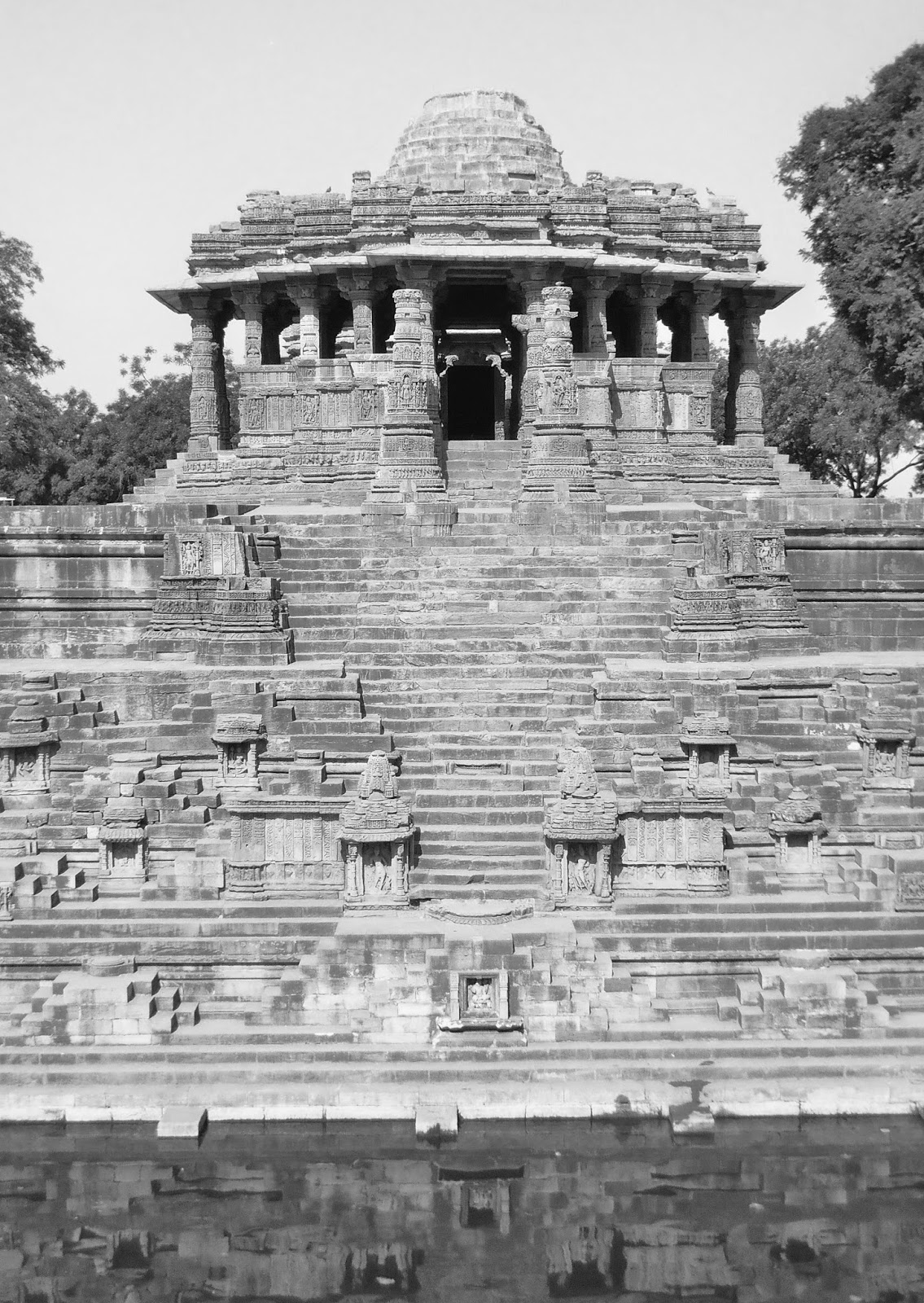 Looking across the Surya Kund to the Sabha Mandap. The Sabha Mandap originally had a tall Sikhara, or tower, only the base of which remains, the remainder having been destroyed by Alauddin Khilji. 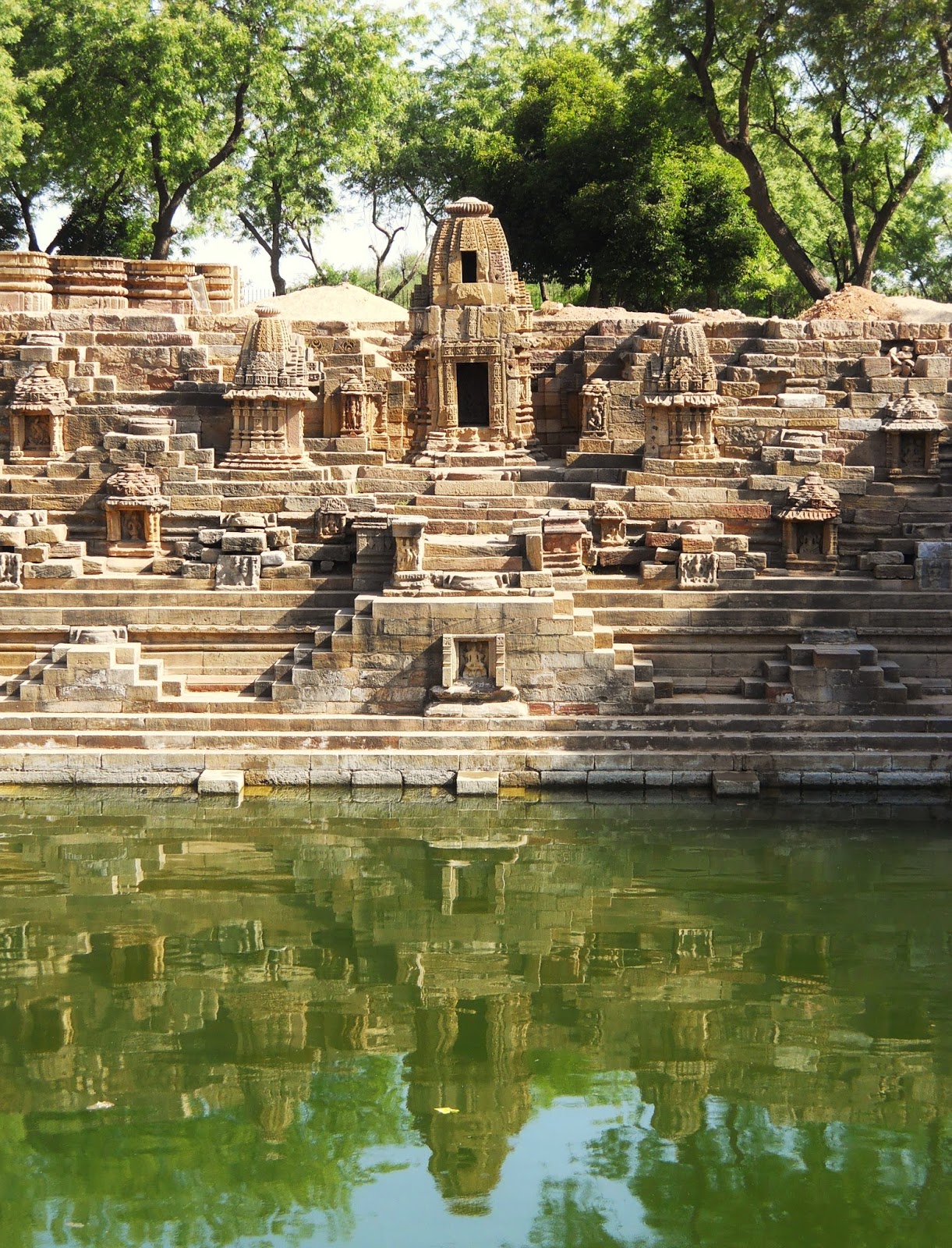 Looking across the Surya Kund. The reservoir has 108 shrines, the four largest containing idols of Shiva, Ganesh, Vishnu, and Sitlamata, the goddess of smallpox, who is worshiped across Nepal and North India. 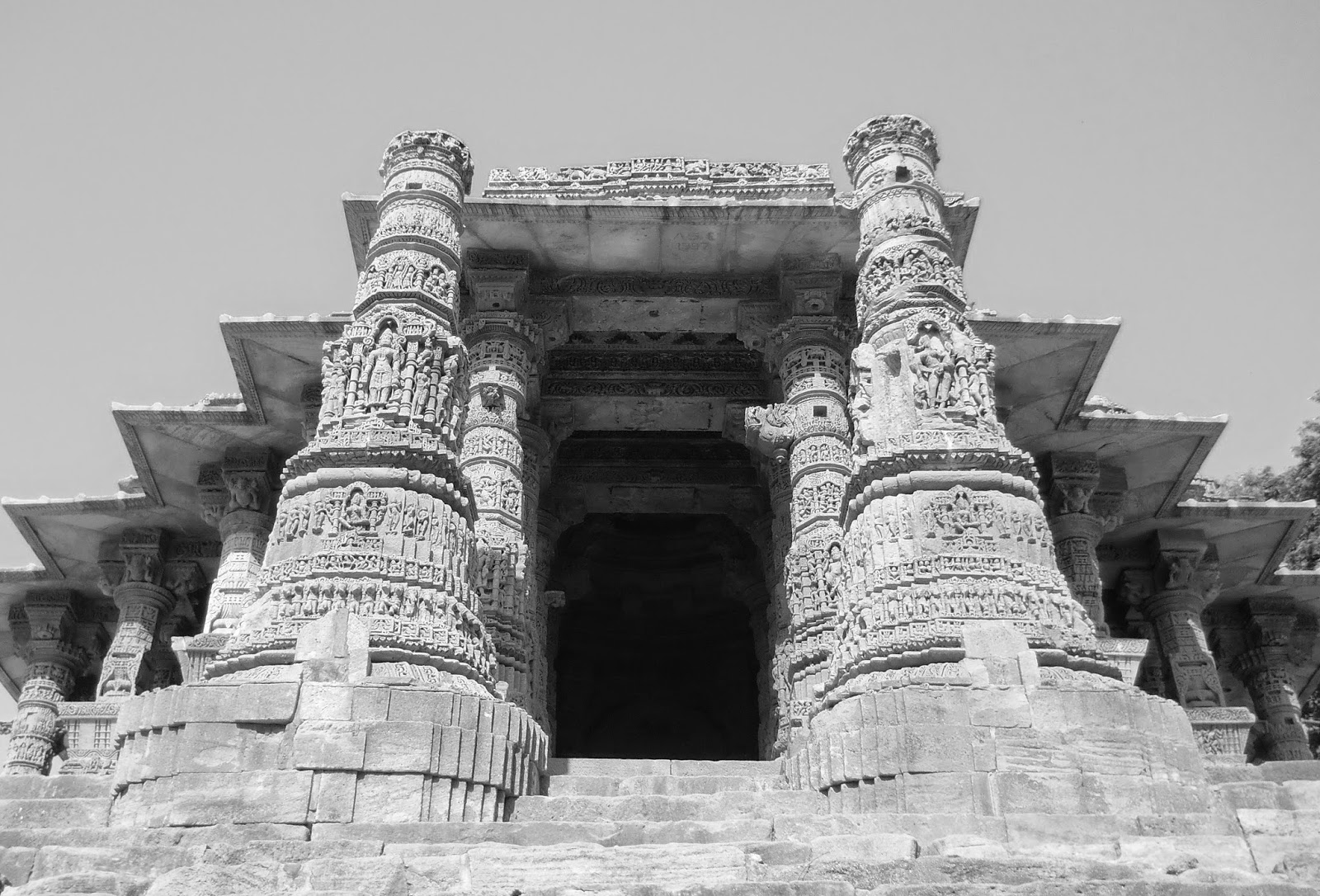 The Torana, or ceremonial entrance way to the Sabha Mandap. There probably was once a beam or arch that spanned the opening between the top of the two pillars. 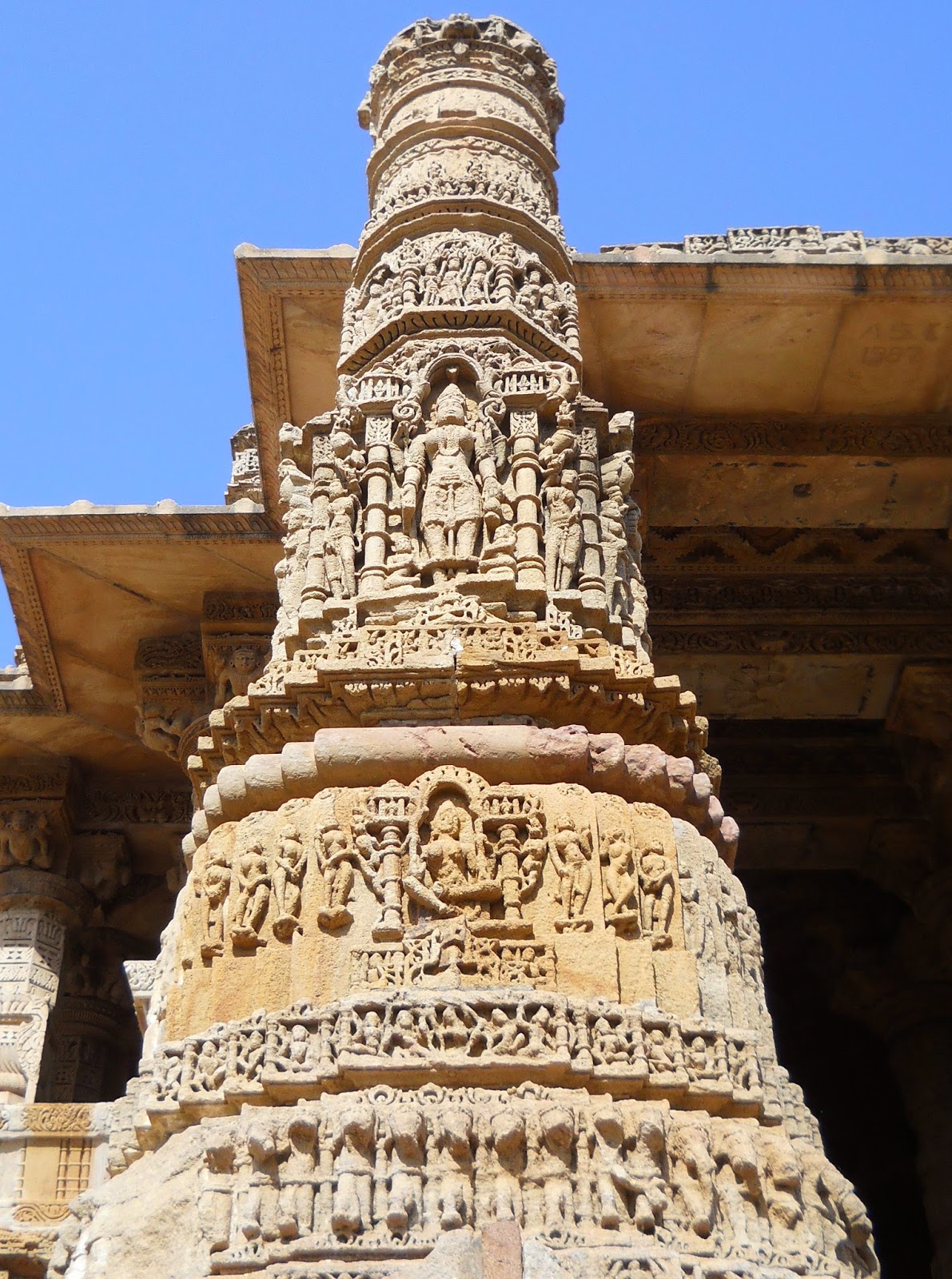 One of the pillars of the Torana. 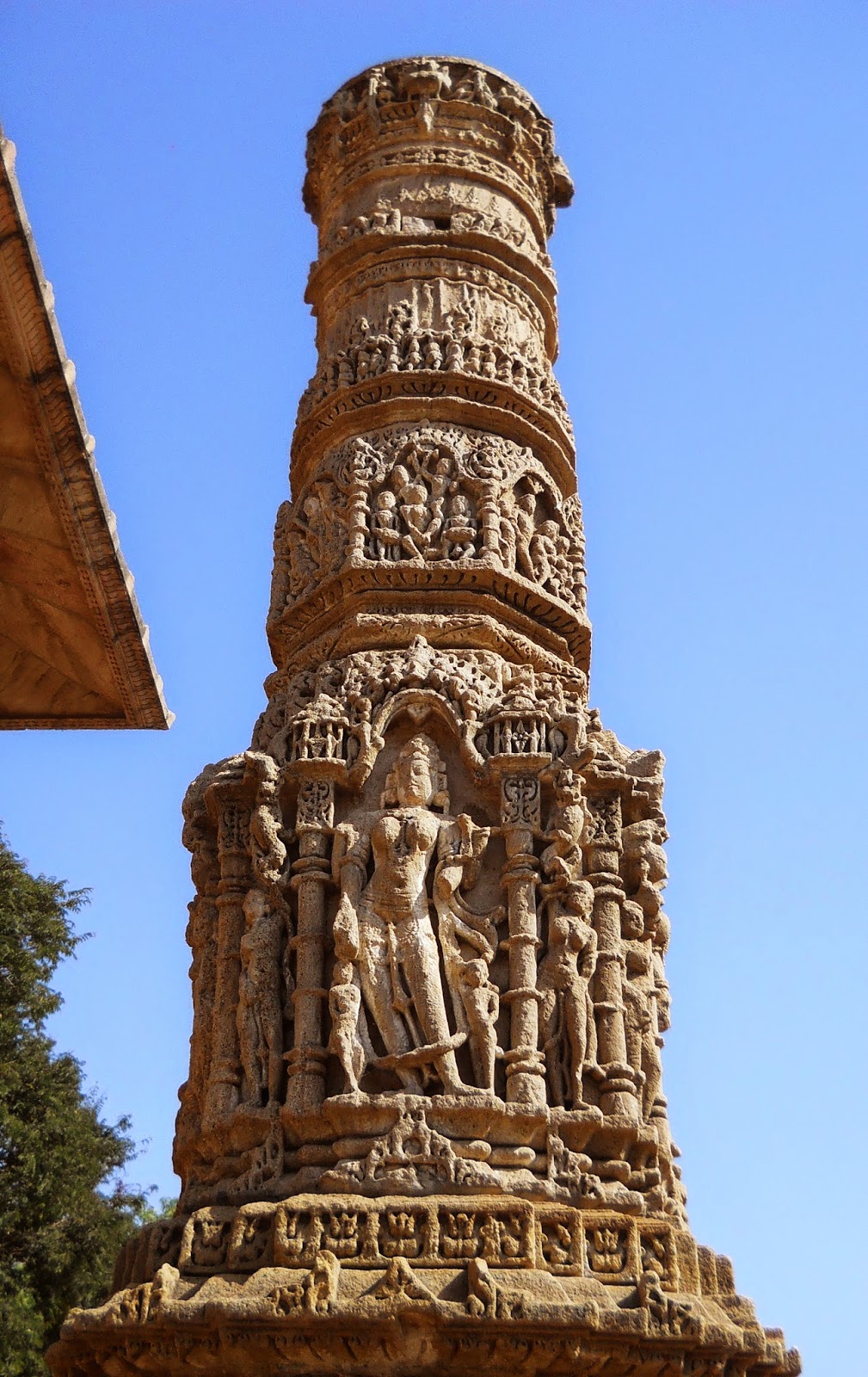 Sculpture on the Torana. 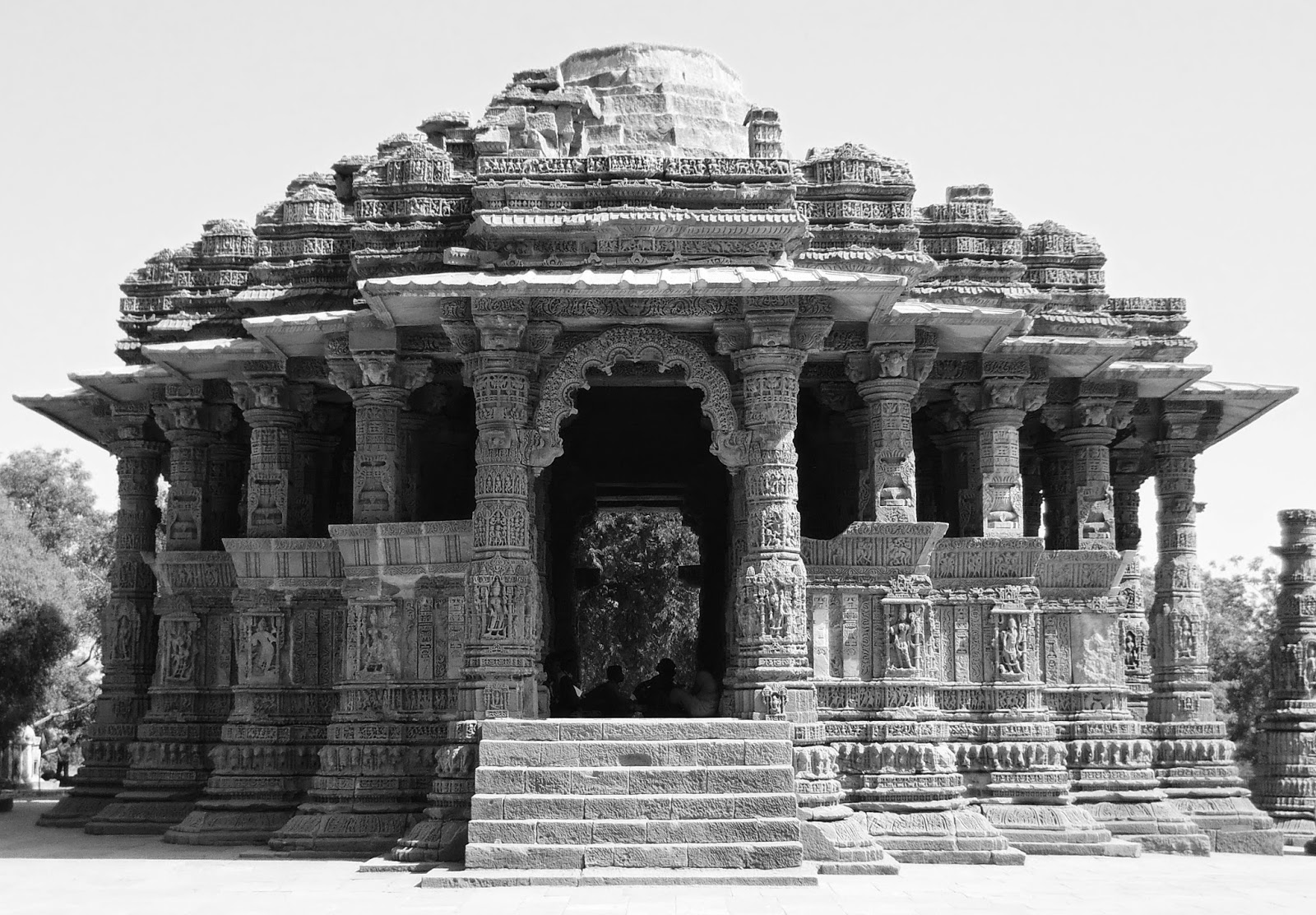 Side view of the Sabha Mandap. The building was meant as a sort of religious conference hall, and has 52 pillars, each of which is profusely decorated with scenes from the Hindu epics. 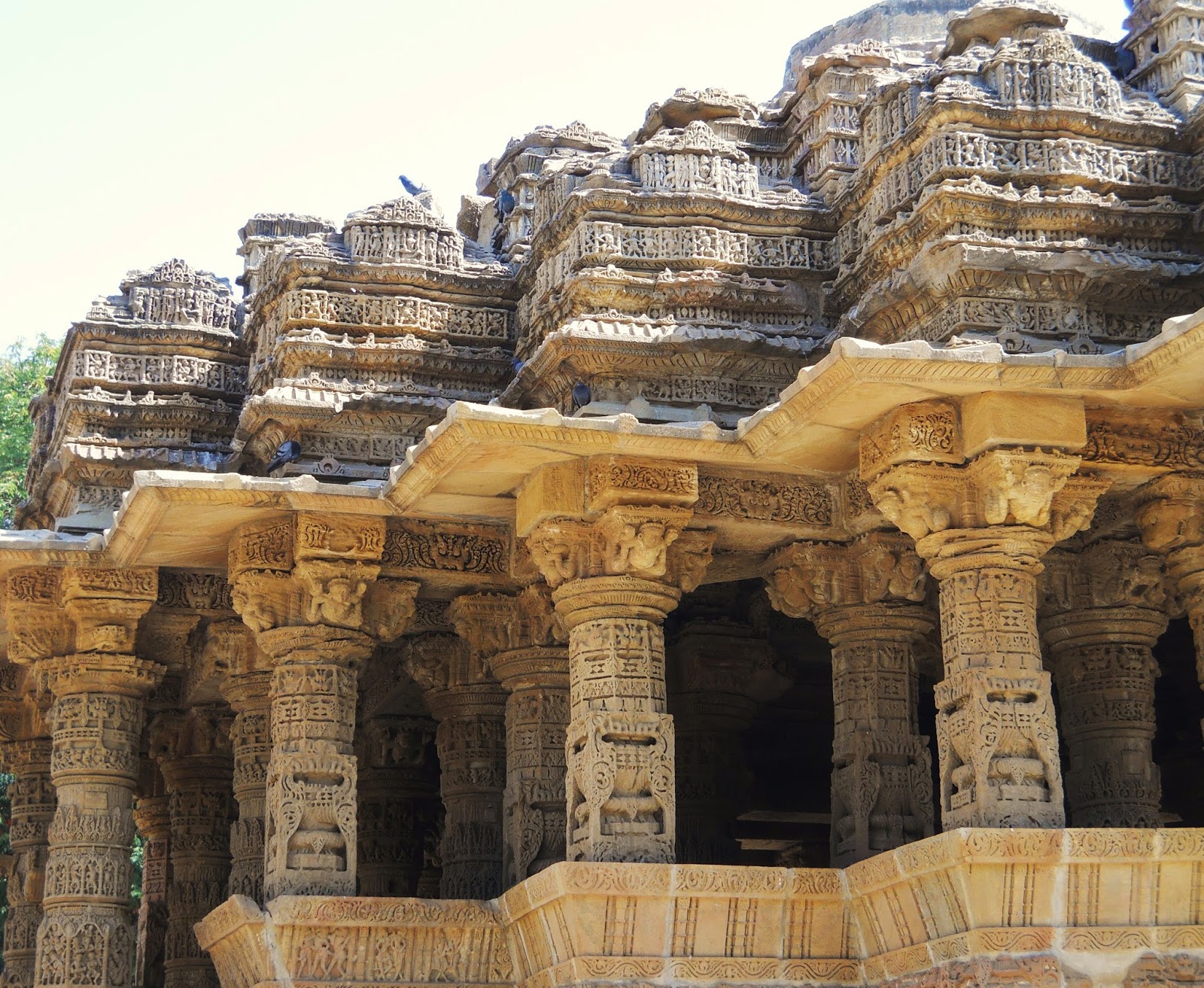 The fascinating and intricately carved roof of the Sabha Mandap. 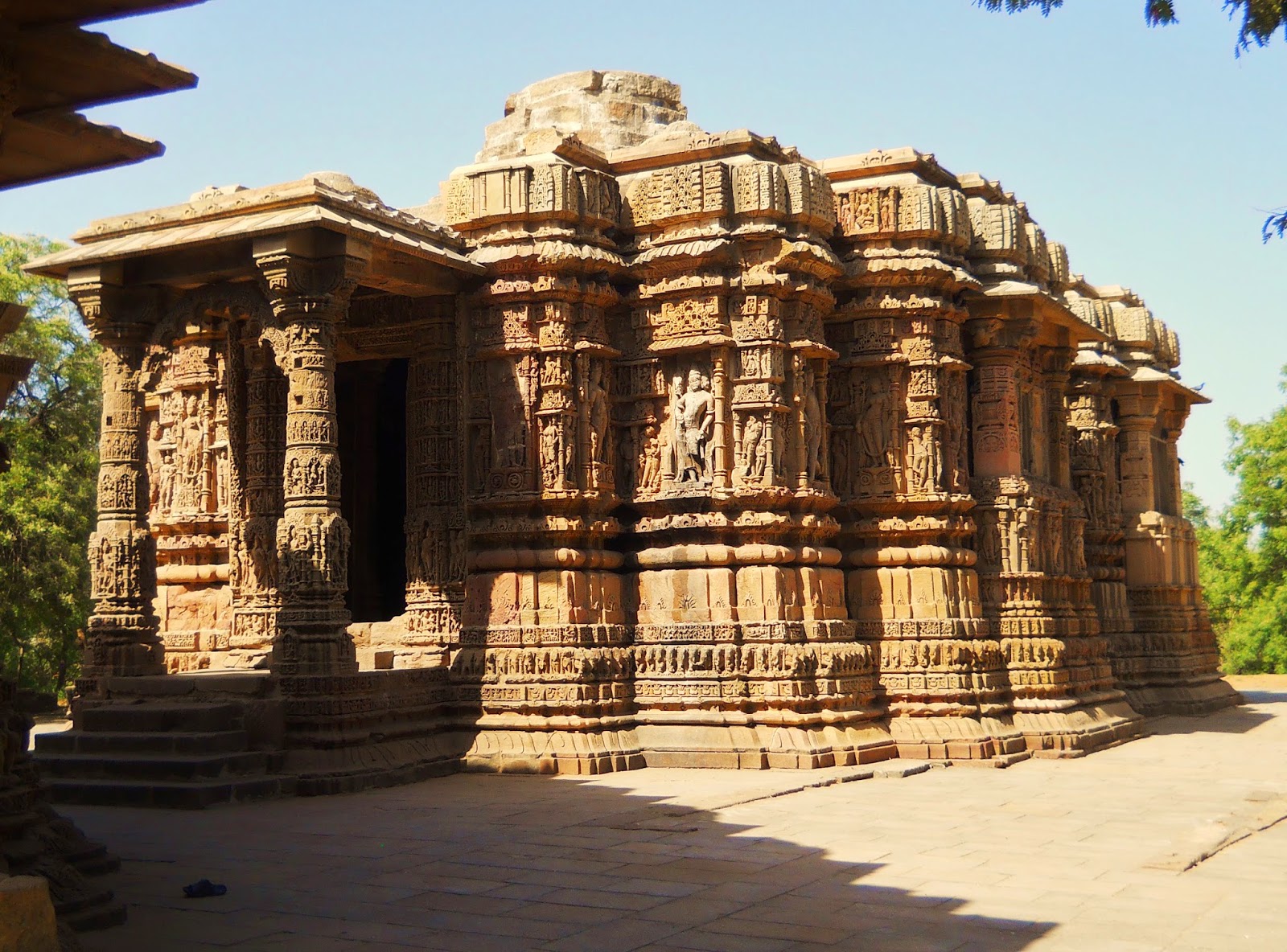 The Guda Mandap, or Sanctum Sanctorum. This building once housed the golden idol of Surya, and also had a Sikhara. 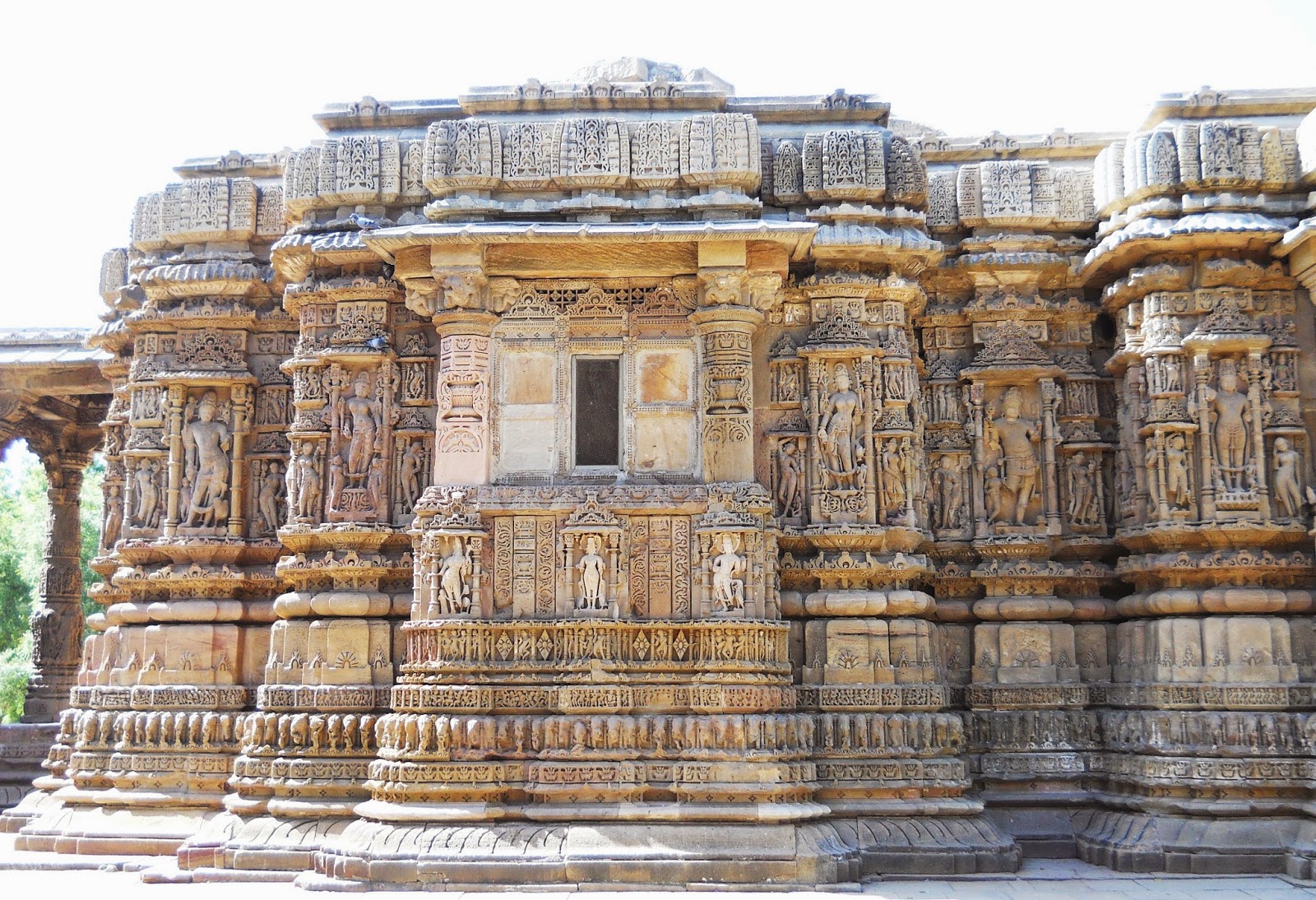 Incredible statuary on the side of the Guda Mandap. The main statues are of the twelve forms of Surya, known as the Adityas (the leader of whom is Vishnu), along with the gods of the directions, of whom there are eight in the Hindu pantheon. 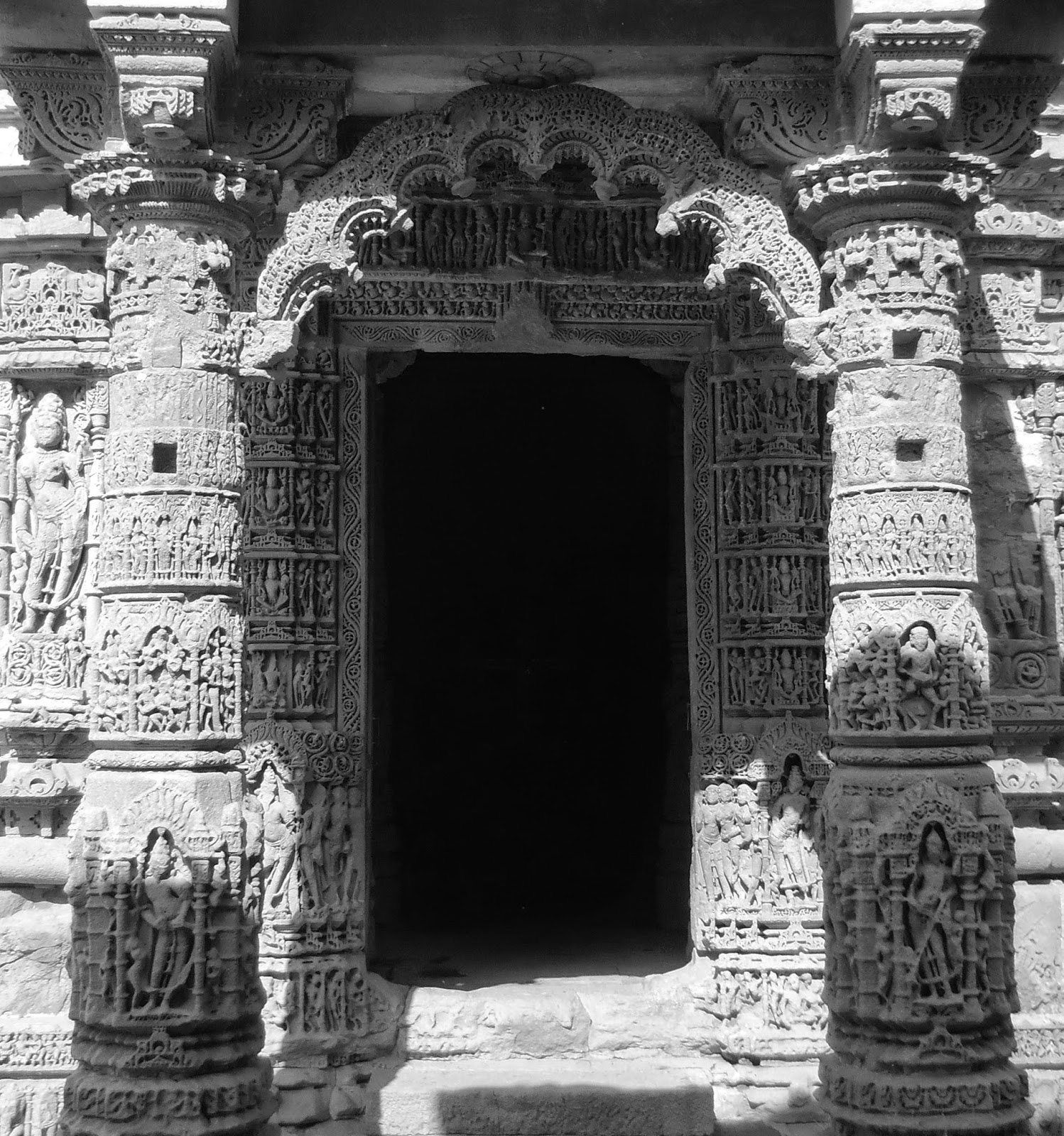 Incredibly dense carvings on the entrance to the Guda Mandap. 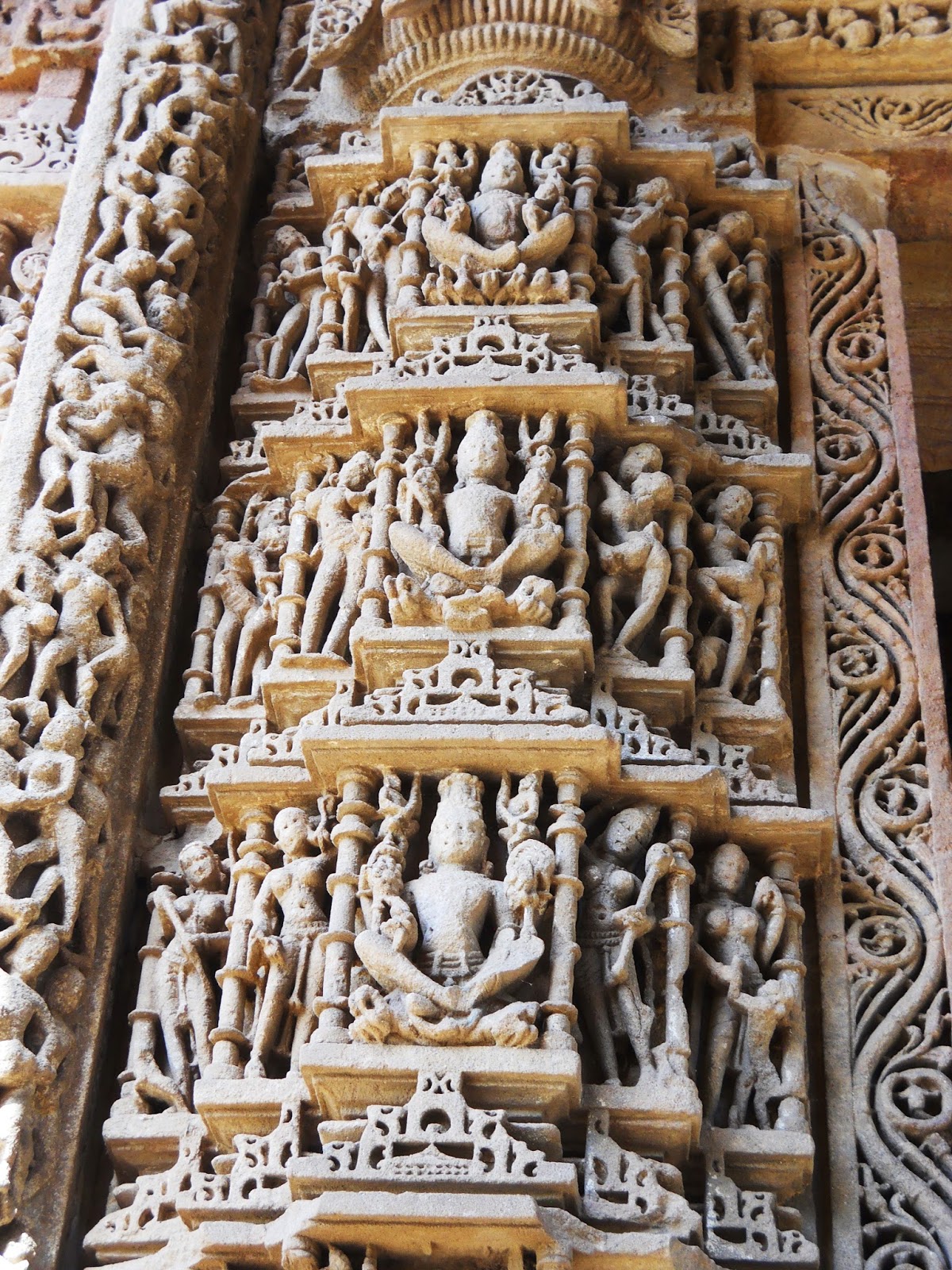 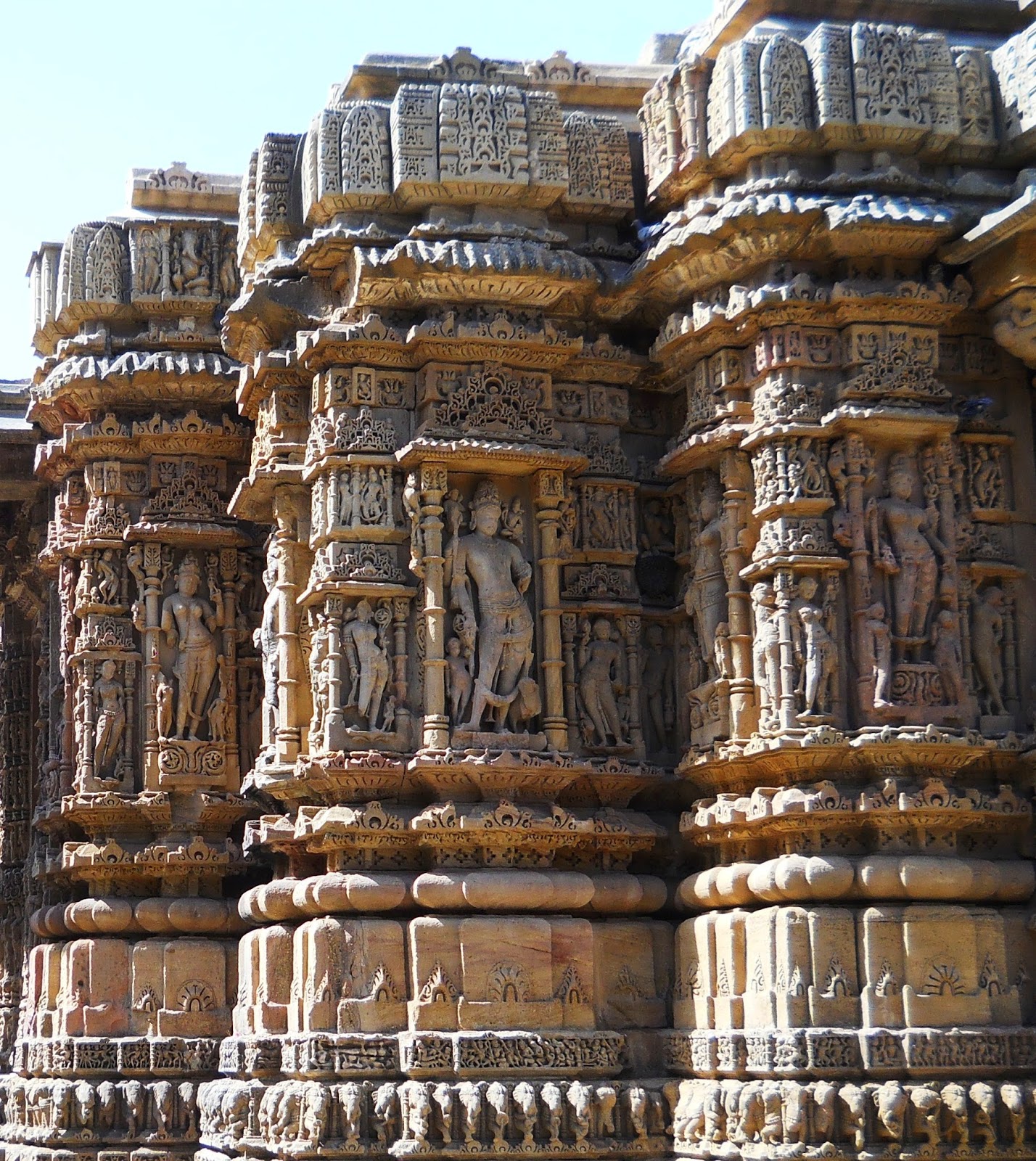 Carvings on the outside of the Guda Mandap.

.........and even more carvings. As I recall, the larger figures were close to being life sized. 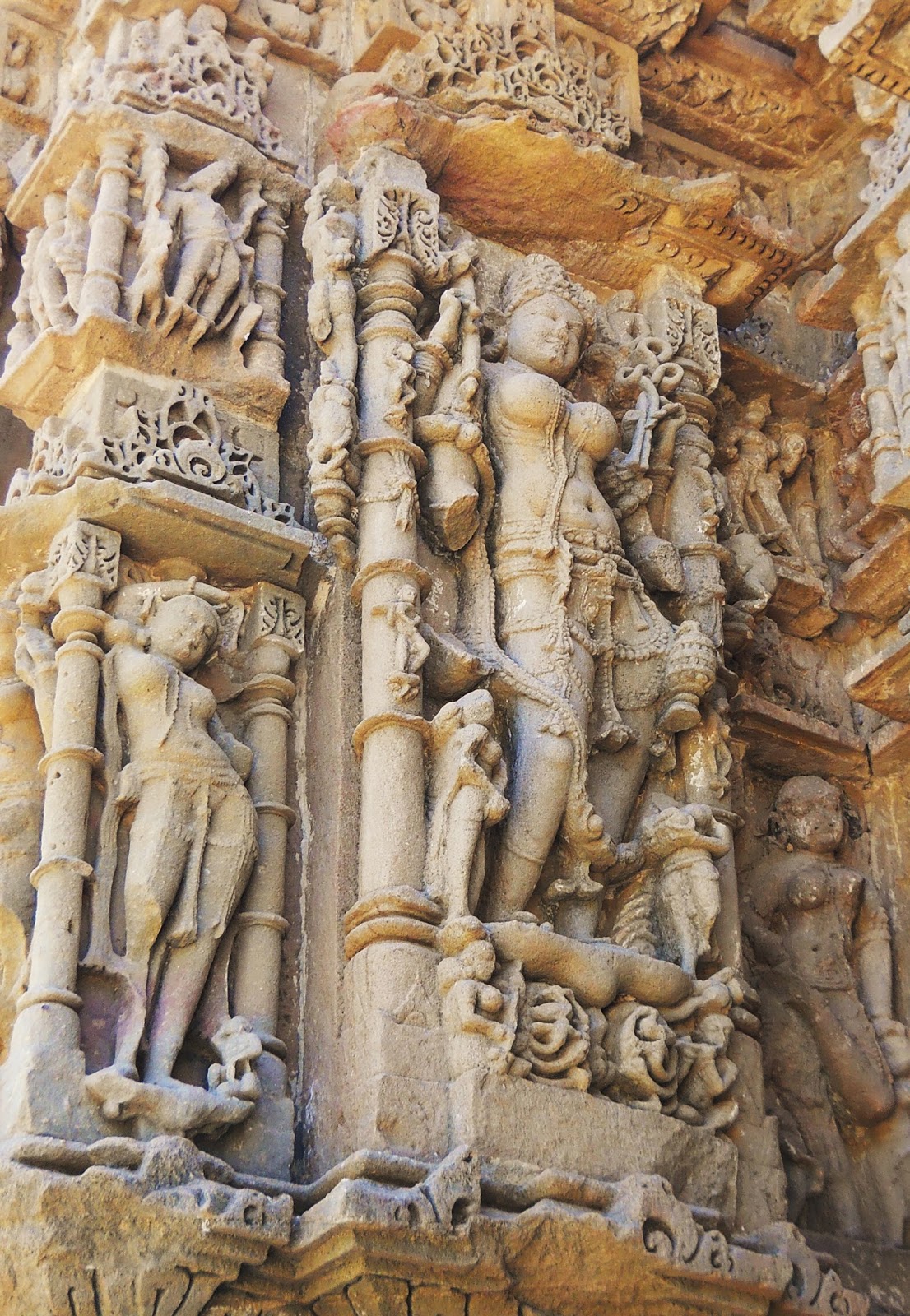 One of the most impressive statues on the side of the Guda Mandap. 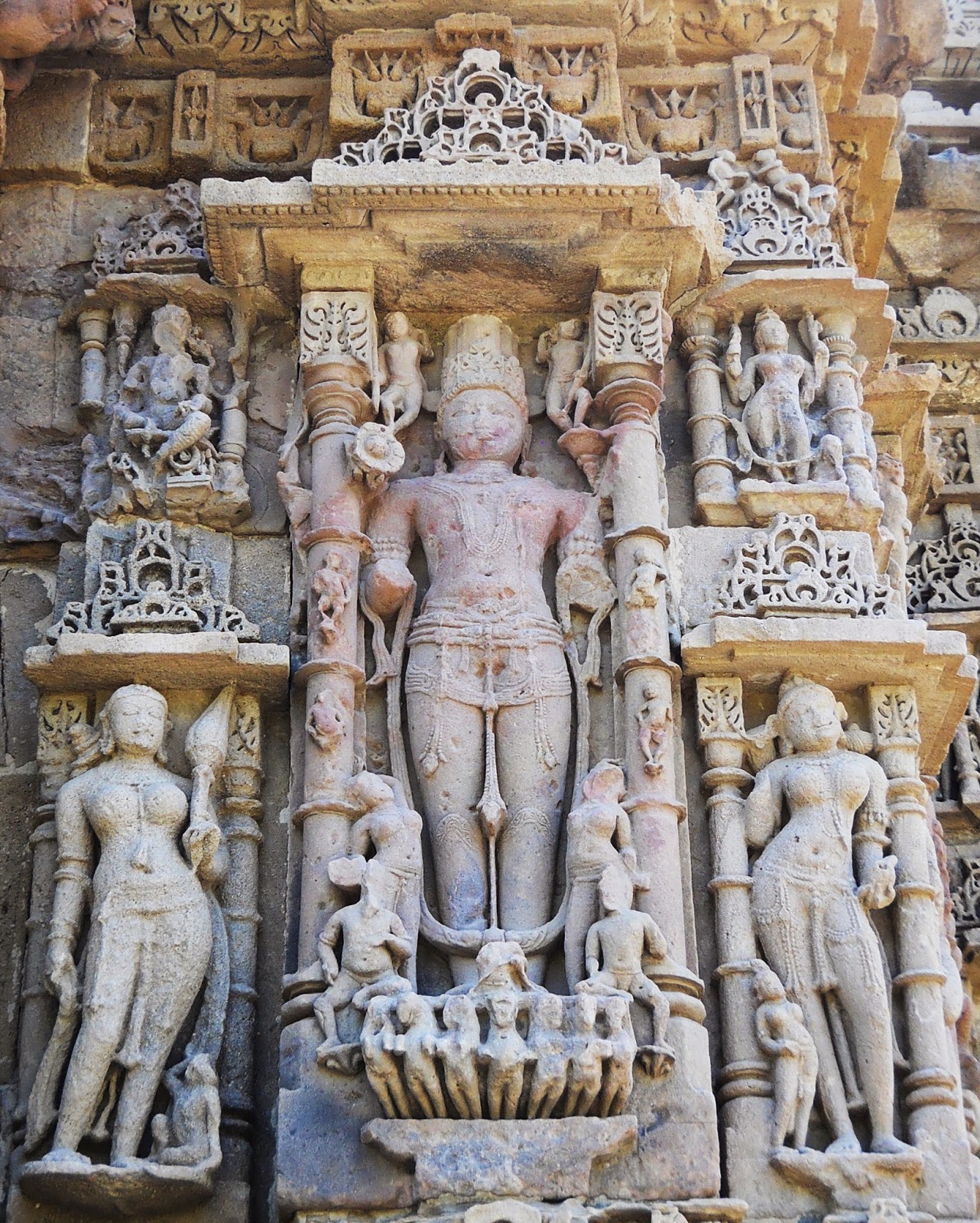 A large panel depicting Surya, identifiable by the lotus he's carrying, which symbolizes the sun (he should have two, but the other seems to have worn off), and by the seven horses that he's riding.

For more on Solanki architecture, go to, check out http://evenfewergoats.blogspot.com/2014/08/rani-ki-vav.html