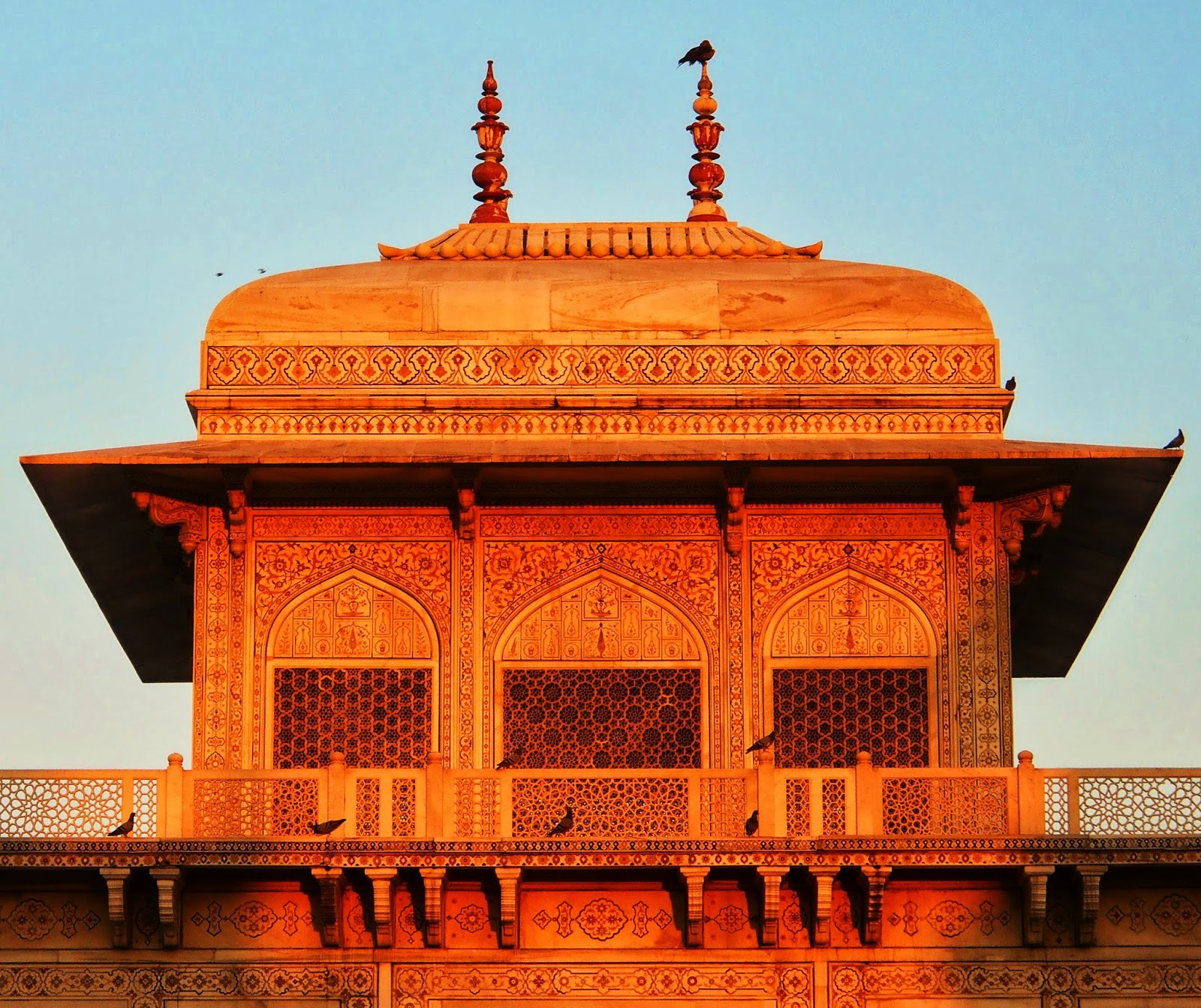 The top of the fantastic tomb of Itimad-ud-Daulah, in the very first direct sunlight of the day.

Along the east bank of the Yamuna, across from the Taj, Agra Fort, and the Old City, are the remnants of a long series of Mughal gardens and tomb enclosures. I had hoped, on my last morning in Agra, to take a long walk along the entire riverfront and see most of these, though I wound up pressed for time and was forced to only visit a couple of the highlights: The spectacular tomb of Itimad-Ud-Daulah, and the interesting and unique Chini ka Rauza, or China Tomb.


Itimad-ud-Daulah's tomb was built by Nur Jahan, empress of Jehangir and the most powerful woman of the Mughal era, for her father Mirza Ghiyas Beg. A talented administrator of Persian origin, Ghiyas Beg rose to the rank of prime minister, and was bestowed with the moniker "Itimad-ud-Daulah" which means "Pillar of the State."

The man himself is perhaps better remembered for his descendants than for his own achievements. His daughter, as Jehangir's twentieth and favorite wife, is often described as the power behind the throne in the latter part of Jehangir's reign, due to the emperor's ever increasing love of opium and alcohol. As the emperor's closest confidant, at a time when the Mughal ruler possessed near absolute power, she was in a position to influence the entire course of the empire. It was only upon Jehangir's death that her position was undermined, as she backed the wrong side in the succession struggle which followed, running afoul of Shah Jahan. Still, she was given a luxurious confinement after Shah Jahan secured the throne, during which she built Ghiyas Beg's Tomb.

Ghiyas Beg was also grandfather of Mumtaz Mahal, the woman who inspired and is buried in the Taj, via another one of his daughters. He was therefore the great grandfather of the emperor Aurangzeb, who ruled over the empire at its greatest extent, and witnessed the beginning of its decline.

His tomb is interesting from an architectural standpoint because it marks the start of the shift from the very eclectic, stylistically mixed buildings of Akbar's time, to the more restrained, persianized structures of Shah Jahan's. The mausoleum is also, famously, one of the first major Mughal buildings to be largely constructed out of white marble. This has led to the tomb being called the "baby Taj," and being often viewed as a model for the more famous mausoleum. This comparison is rather unfortunate: Other than the use of white marble, the tomb of Itimad-ud-Daulah is very much unlike the Taj, and deserves to be seen in the light of its own merits and not merely as a stepping stone to the other building.

Though the mausoleum is far from obscure, it draws nothing like the vast crowds that flock to the Taj. I visited it right after dawn and spent nearly forty five minutes at the site taking photos in the rapidly changing lighting conditions. It wasn't until I was leaving that other people began to show up. 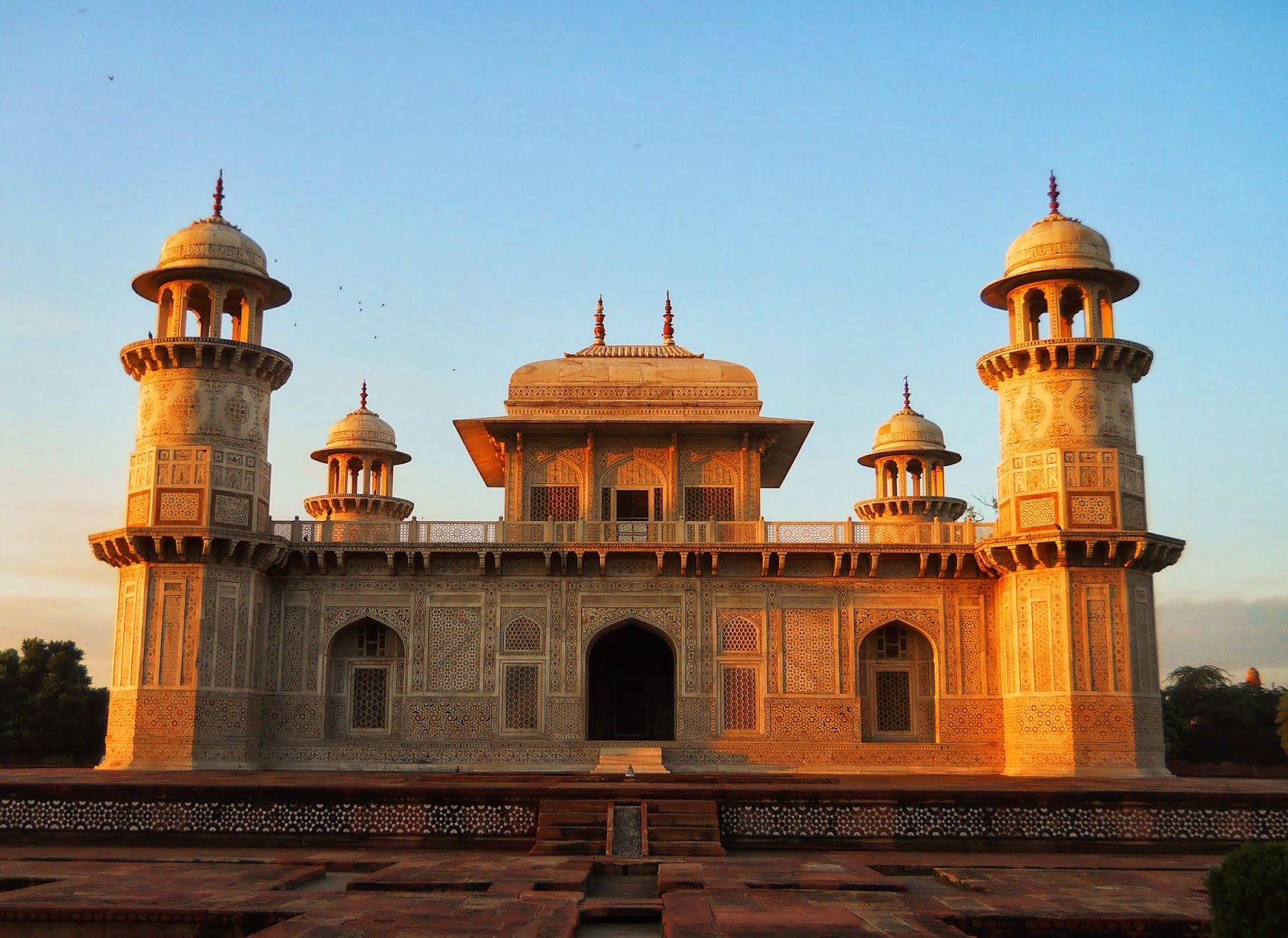 The tomb of Itimad-ud-Daulah at dawn. 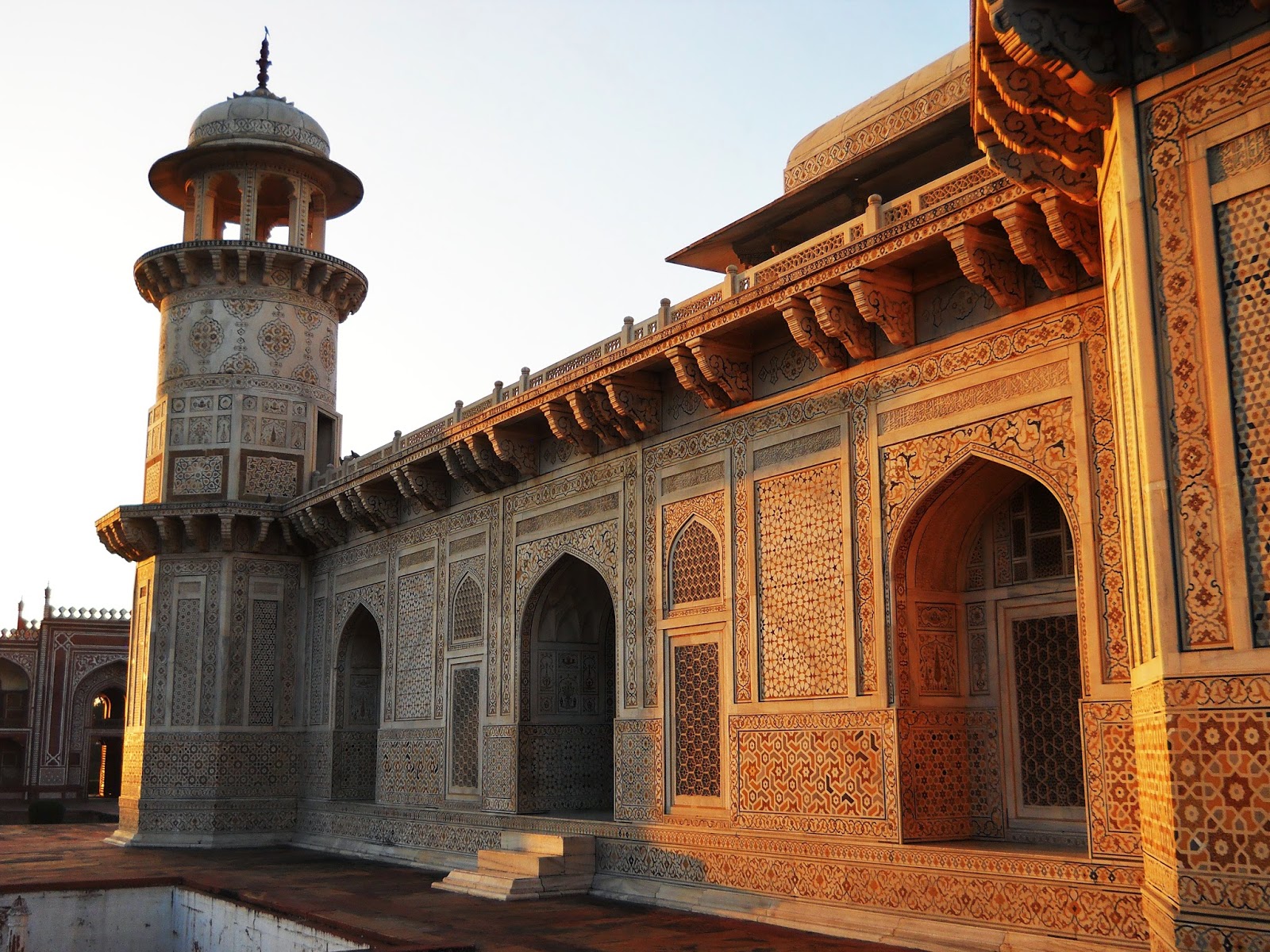 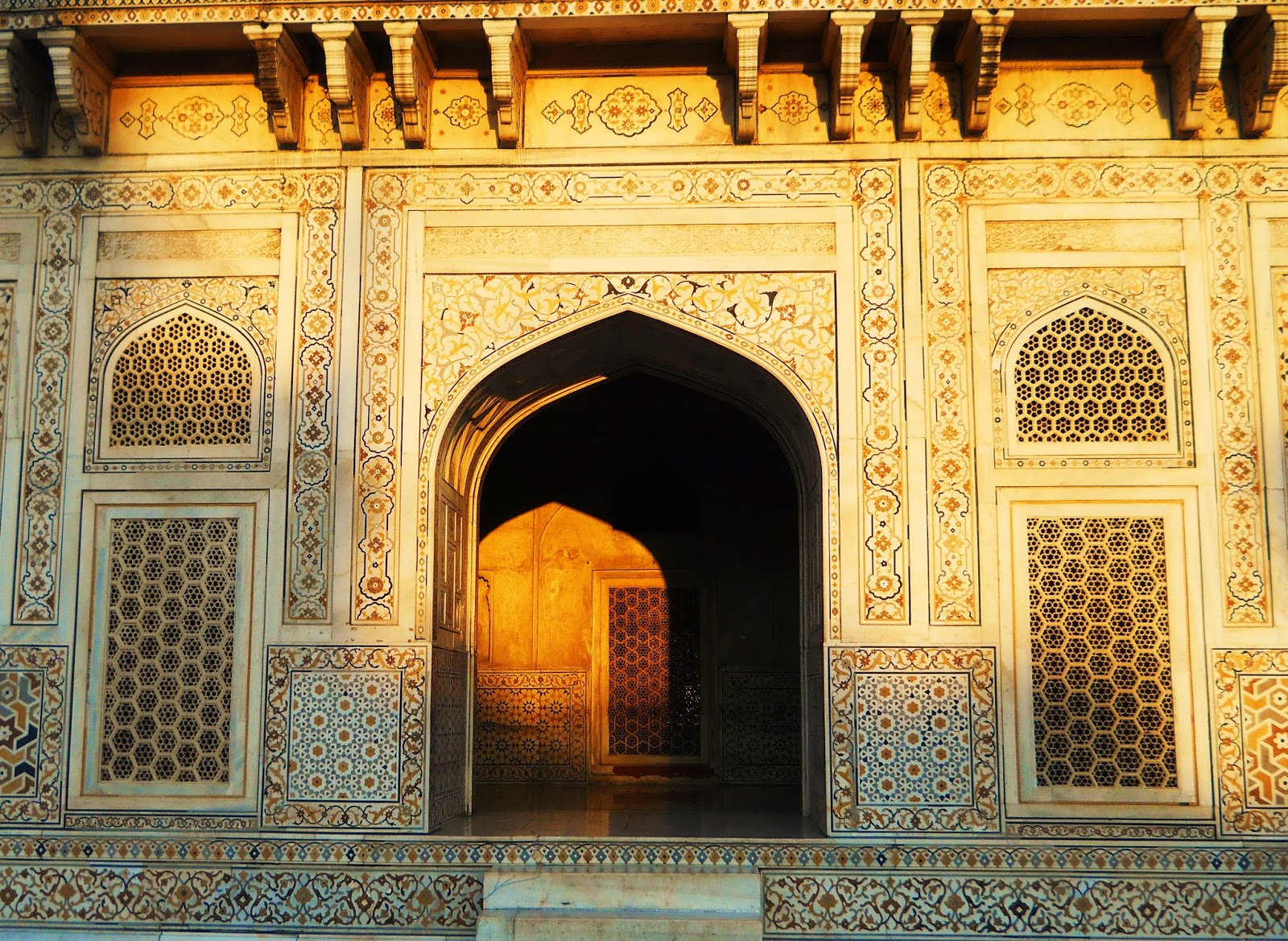 A view on the side of the tomb. The most striking feature of the mausoleum is its incredible inlay work. All of the colored patterns visible here are fitted stones. 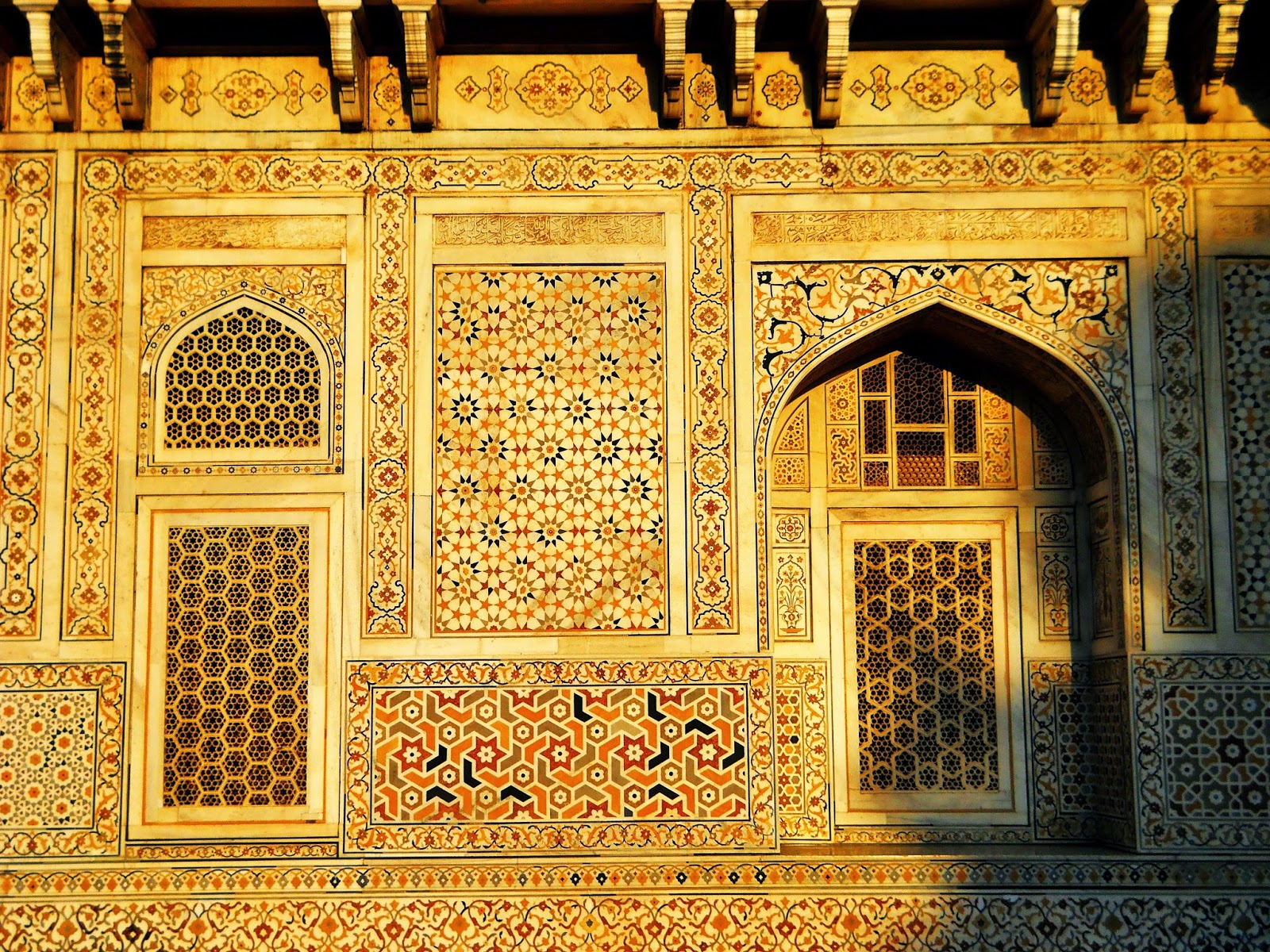 Another view on the incredible inlay work. The technique here is at an interesting transitional point between the spectacular but simpler patterns of Akbar's Tomb, and the more intricate peitra dura work of the Taj Mahal. Many sources make the mistake of referring to the technique here as peitra dura (which literally means "hard stone" and was imported from Europe...hence the Italian), however this variety of stone inlay work had been known in India for quite some time. 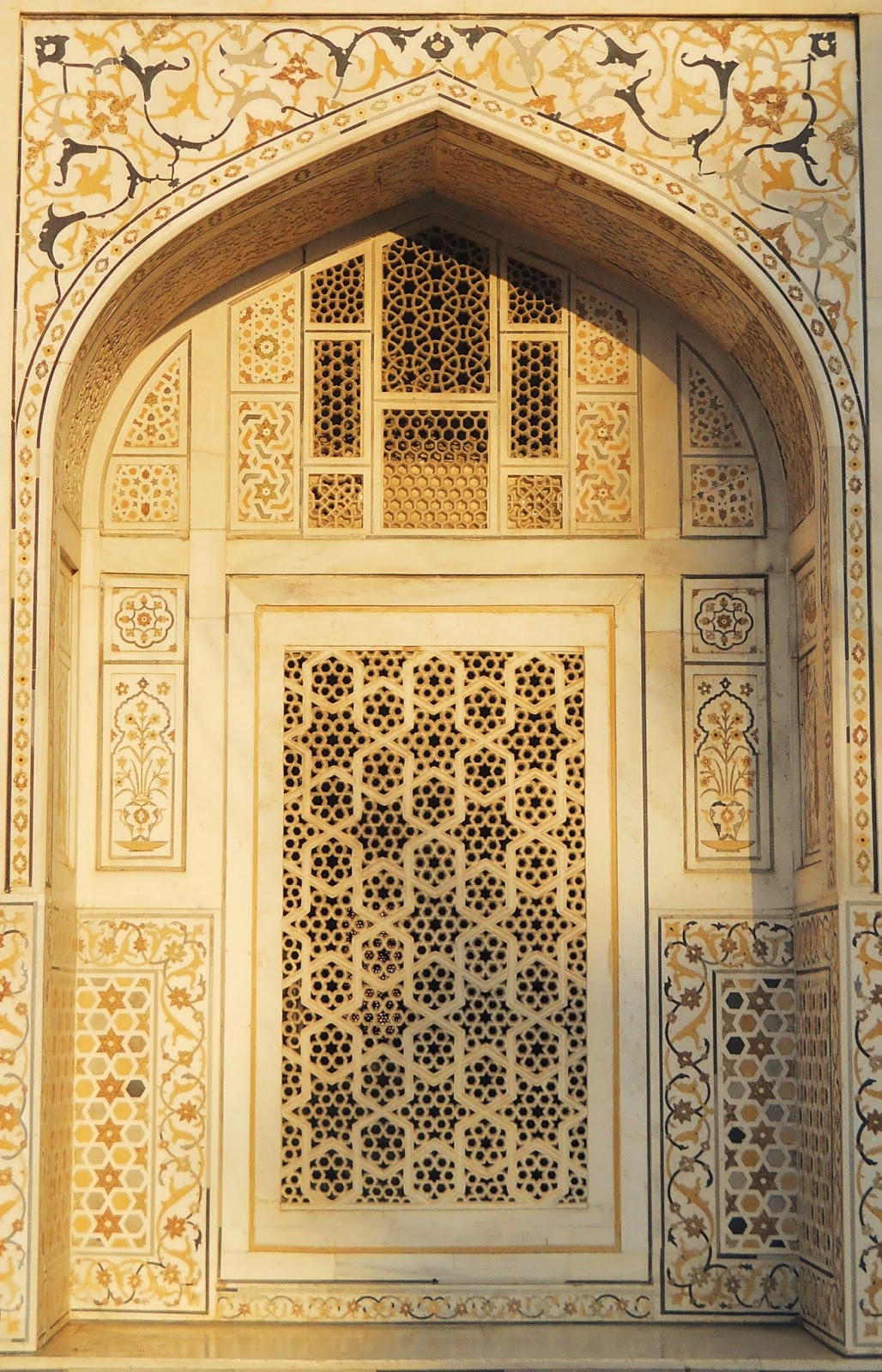 One of the very fine jali screen windows on the side of the tomb. 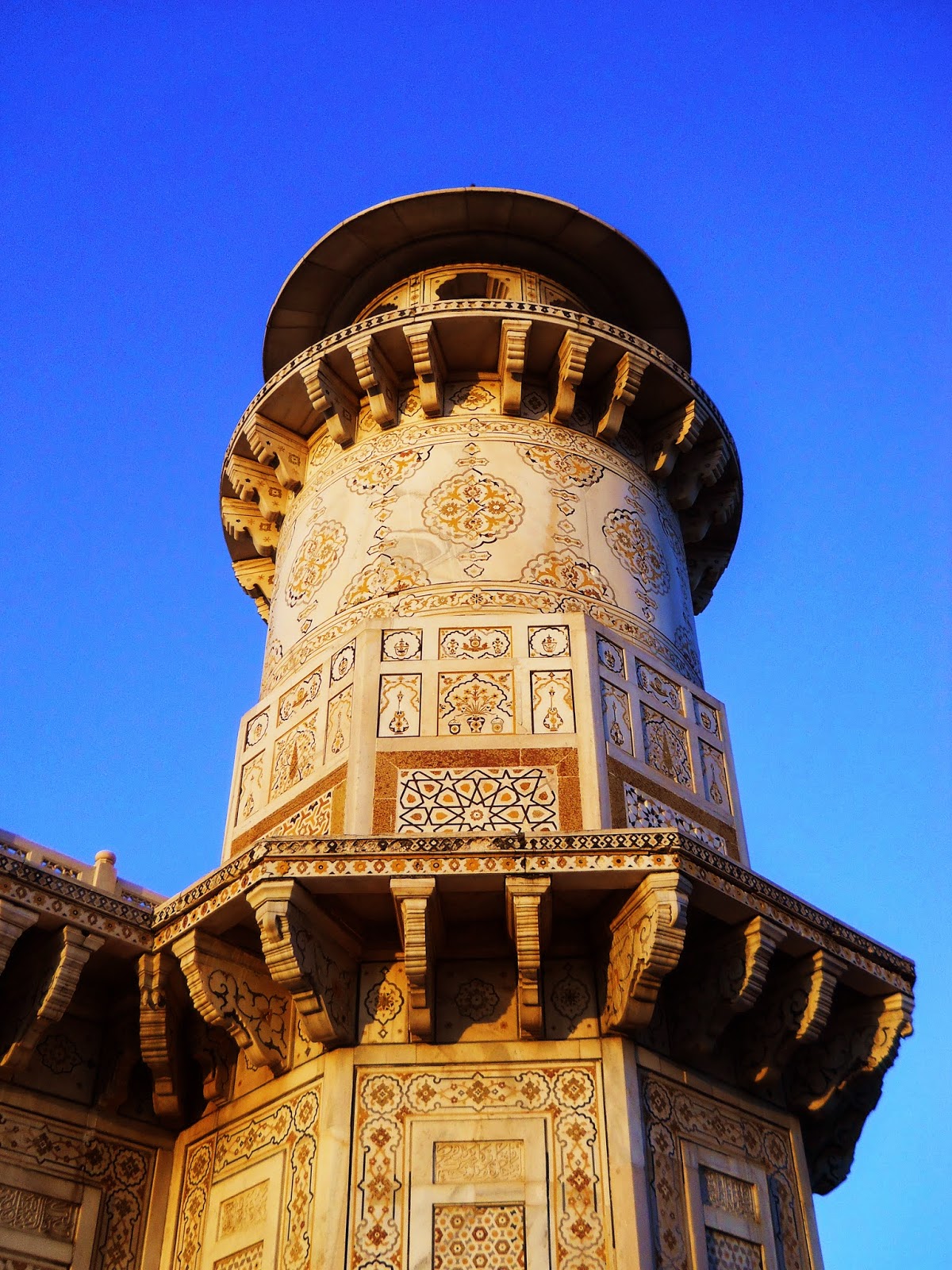 One of the minarets. 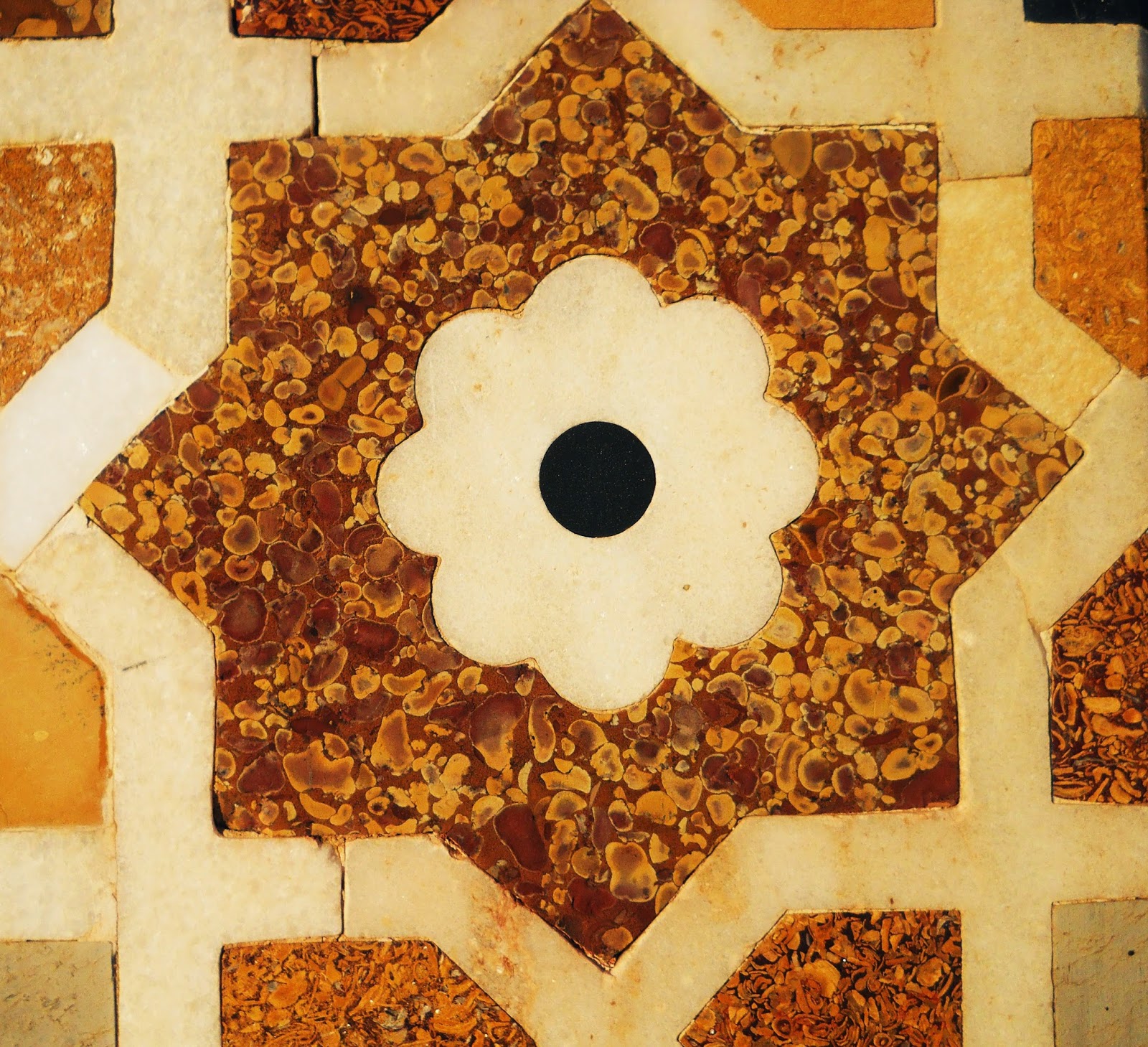 Close on one of the inlaid stones. 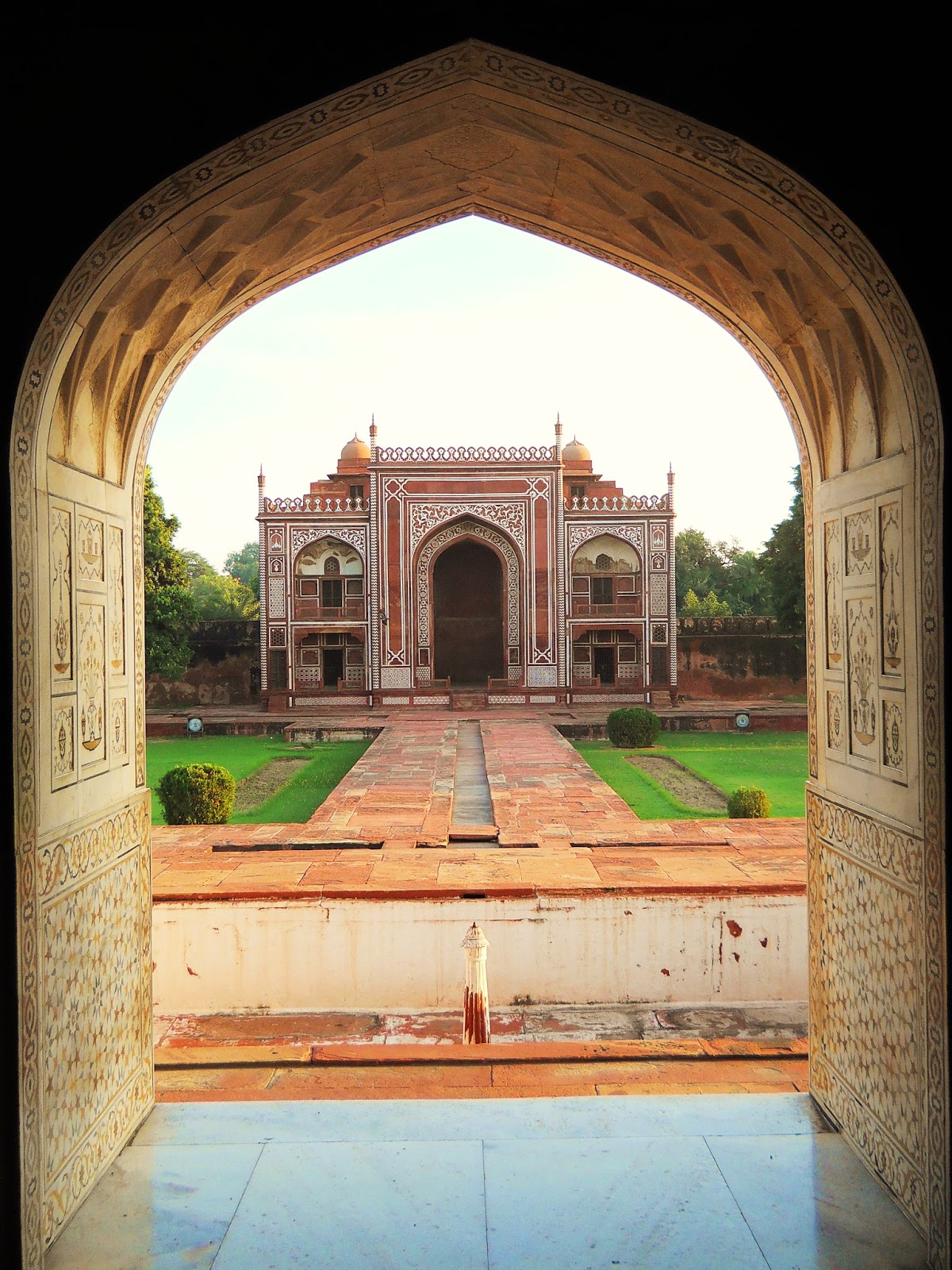 Looking out from the north entrance of the mausoleum, to one of the false gateways of the tomb enclosure. As with Akbar's tomb compound, here there is only one "true" gateway through the wall around the tomb, while the other three serve merely ornamental purposes. 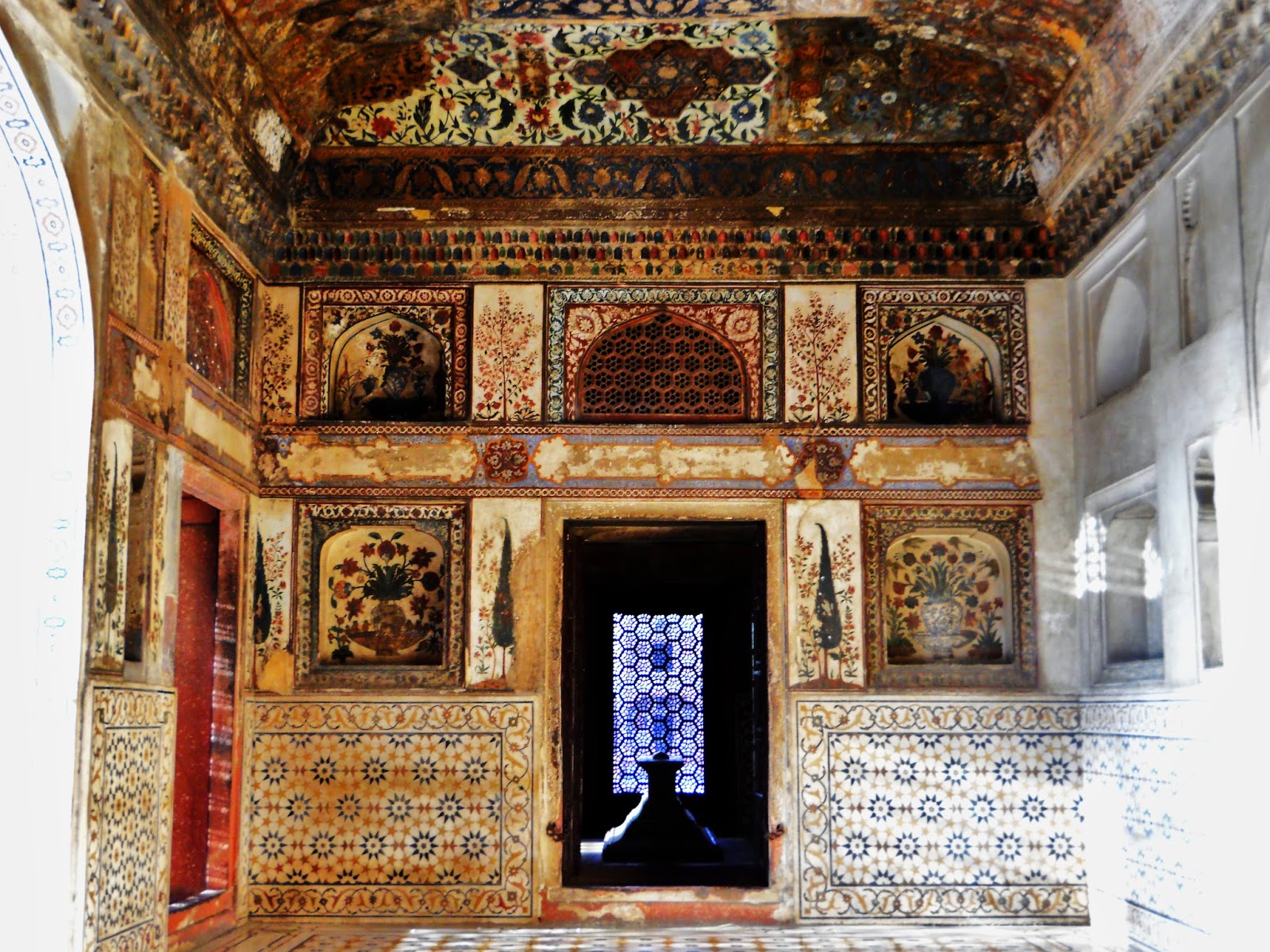 Both the inside and the outside of the tomb are fantastically decorated. The interior is covered in exquisite paintings, mostly of plants. Note that, in the center of the picture, above the cenotaph, you can see through the jali screen window to the east gate of the enclosure. The grave marker is that of one of Ghiyas Beg's relatives, a large number of whom are buried in the tomb. 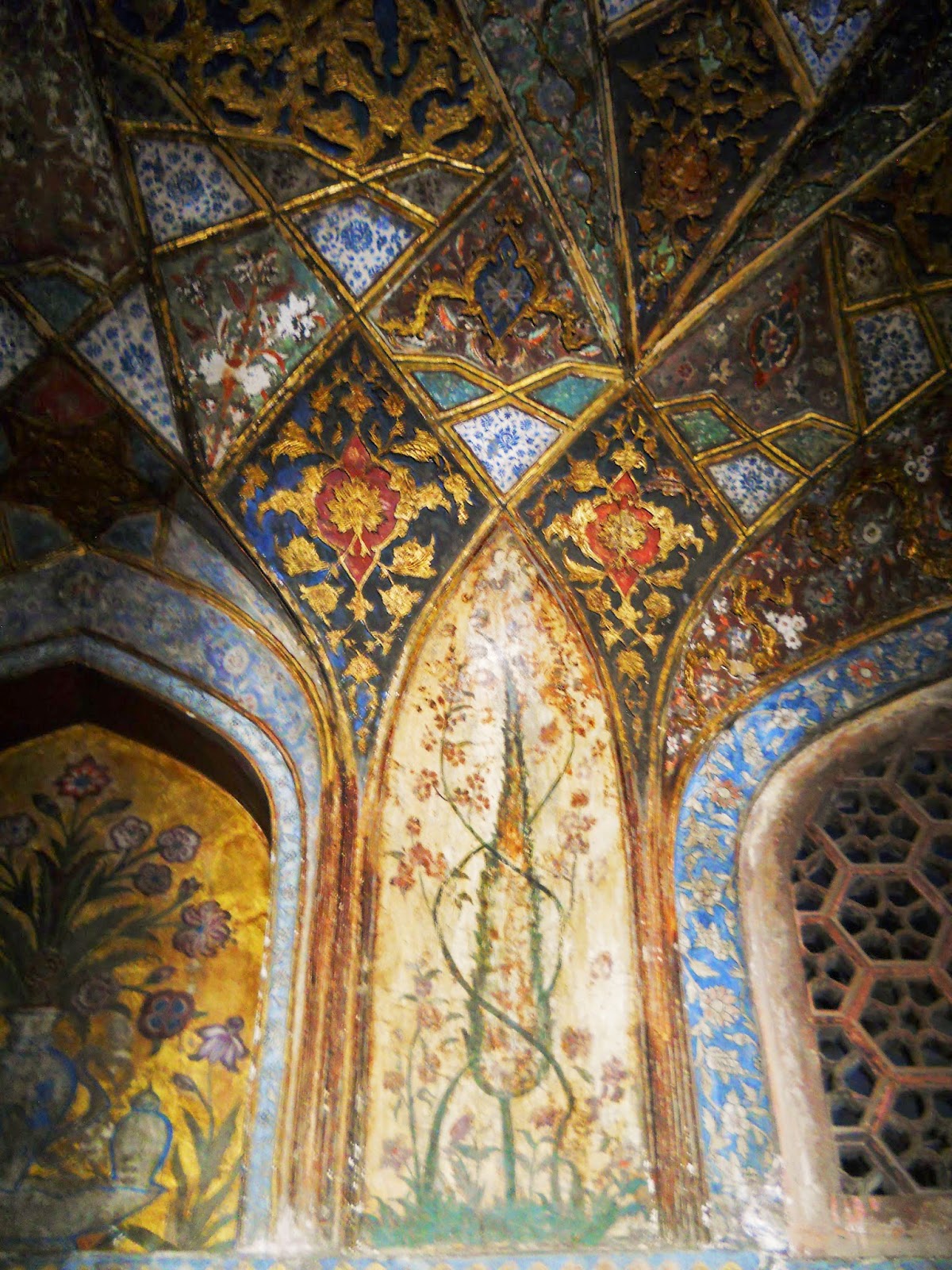 Paintings in the central chamber of the tomb, housing Ghiyas Beg's grave. The chamber is spectacularly covered in paintings, though unfortunately the light was not strong enough to get a good picture with my little camera (I need a new one). 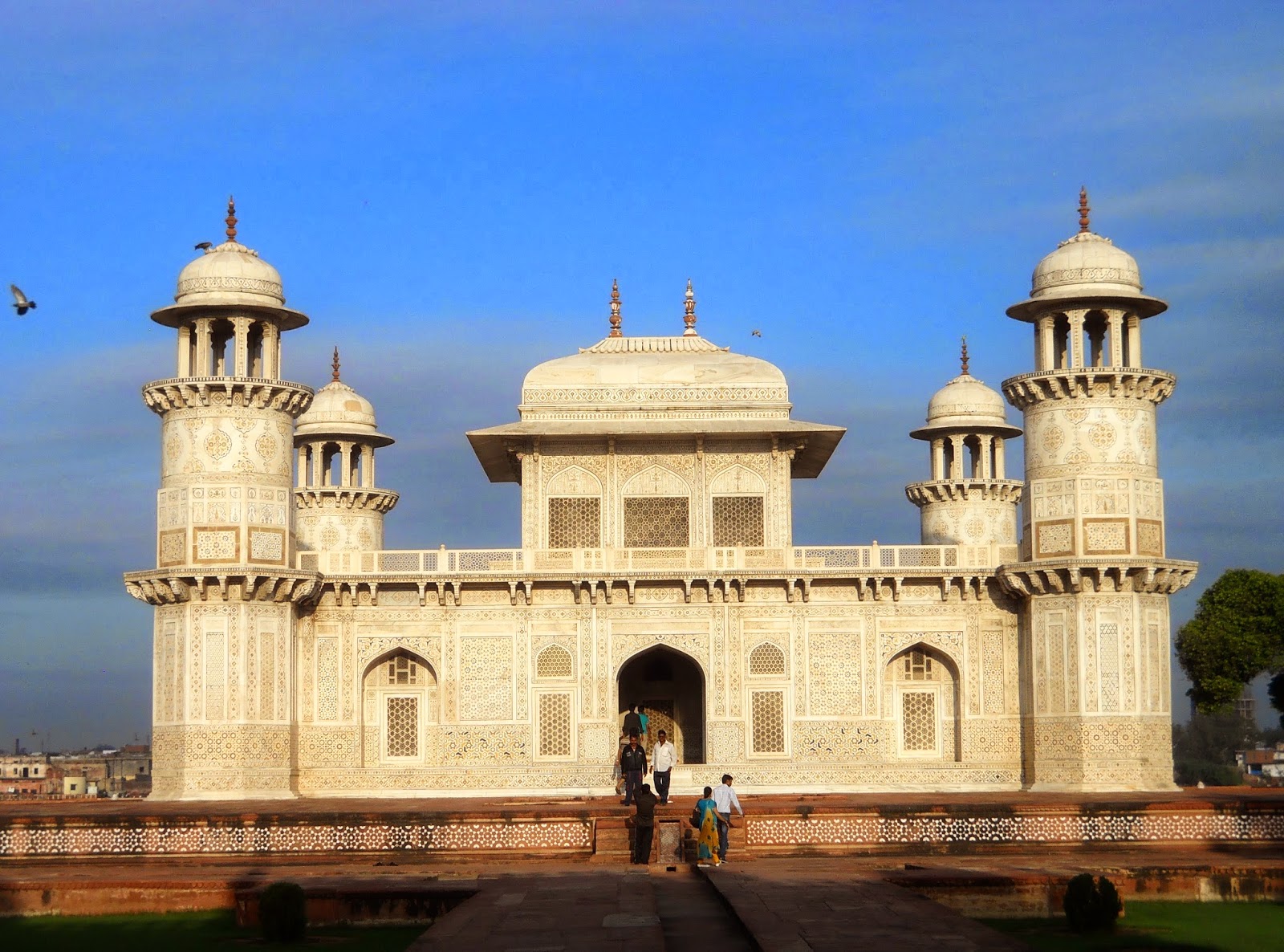 A little later in the day, just as more tourists were arriving. The speed with which white marble changes color in different lighting never ceases to amaze.

After leaving the Tomb of Itimad-ud-Daulah, I had just enough time to walk north and visit a few of the nearby monuments. The most prominent of these was the Chini ka Rauza, or China Tomb, which is the early 17th century mausoleum of Mullah Shukrullah Shirazi, a prime minister in Shah Jahan's court who was also a poet and the brother of the calligrapher who worked on the outside of the Taj Mahal. His tomb is one of the most unusual in all of North India. Architecturally it's very simple, even to the point of being drab, with flat sides, an unusually small dome, and short minarets. But what stands out are the incredible, if now partially effaced, panels of blue, green, and black tile work which once covered the exterior of the tomb. These explain the simplicity of the architecture: The whole tomb was designed solely around having large flat spaces on which to display the tile work. 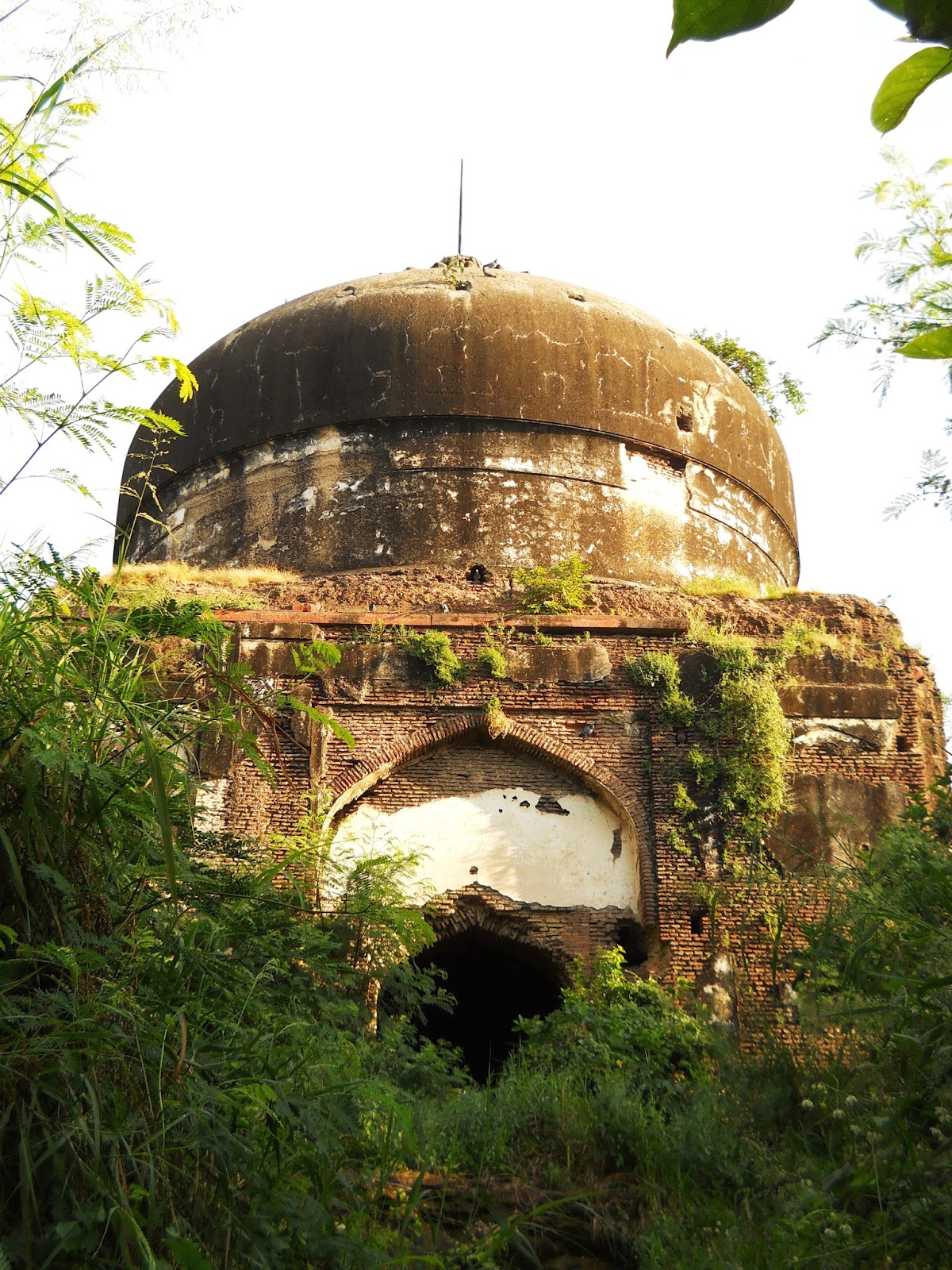 Not far from the almost perfect tomb of Itimad-ud-Daulah is this neglected, creepy, dilapidated mausoleum. It is the tomb of Prince Parwiz, one of the brothers of Shah Jahan. Virtually all of the ornamentation once on the outside of the tomb has been stripped away, while the inside is being used as a cow shed. As I recall, a couple of locals had shacks built right next to it. 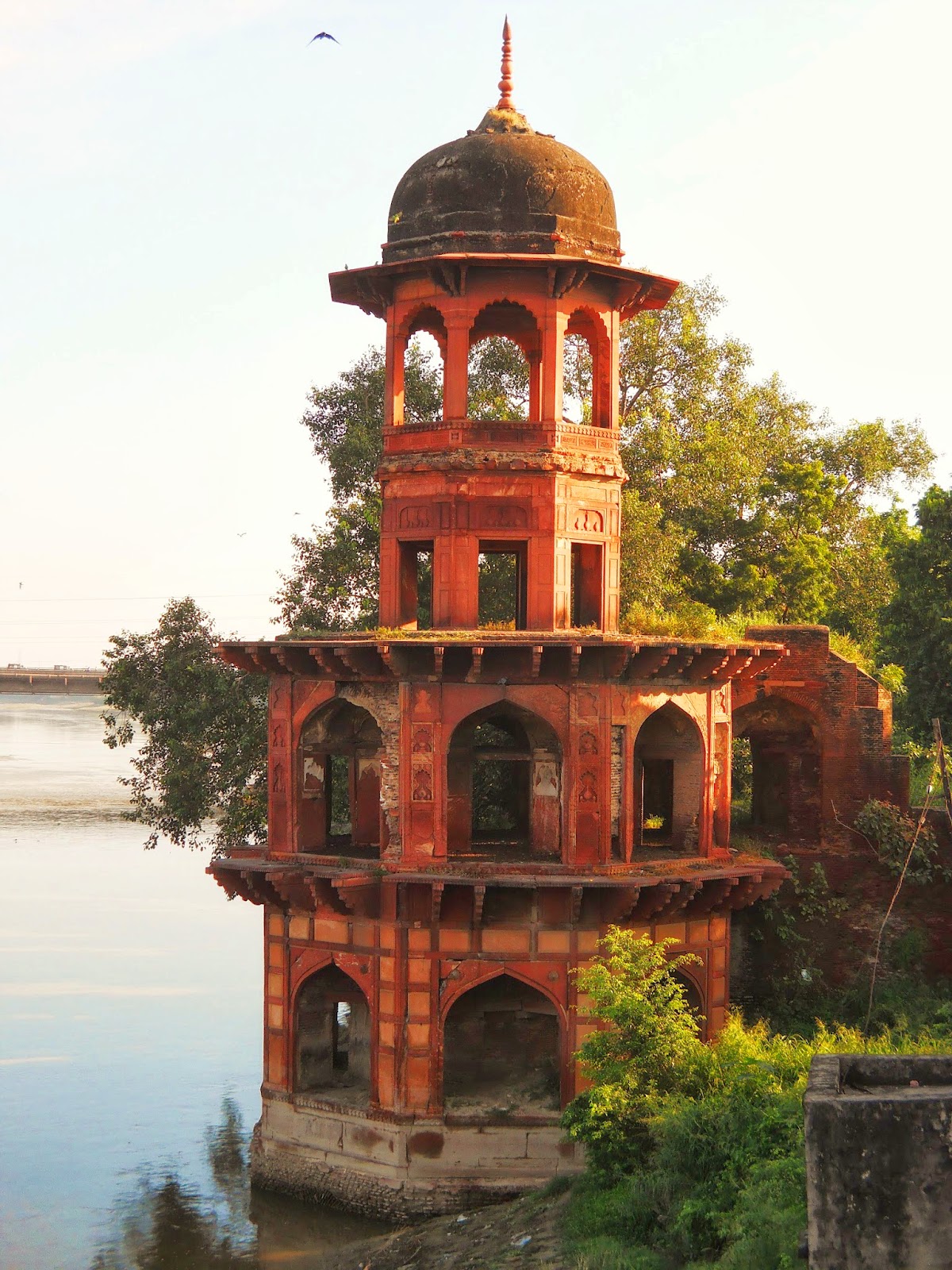 An excellent corner turret, one of the few architectural remains of a Mughal garden from Mumtaz Mahel's time called Zahara Bagh. The body of water to the left of the picture is the sad revolting river of putrescence that was once the Yamuna. This was taken from the Chini ka Rauza tomb enclosure. 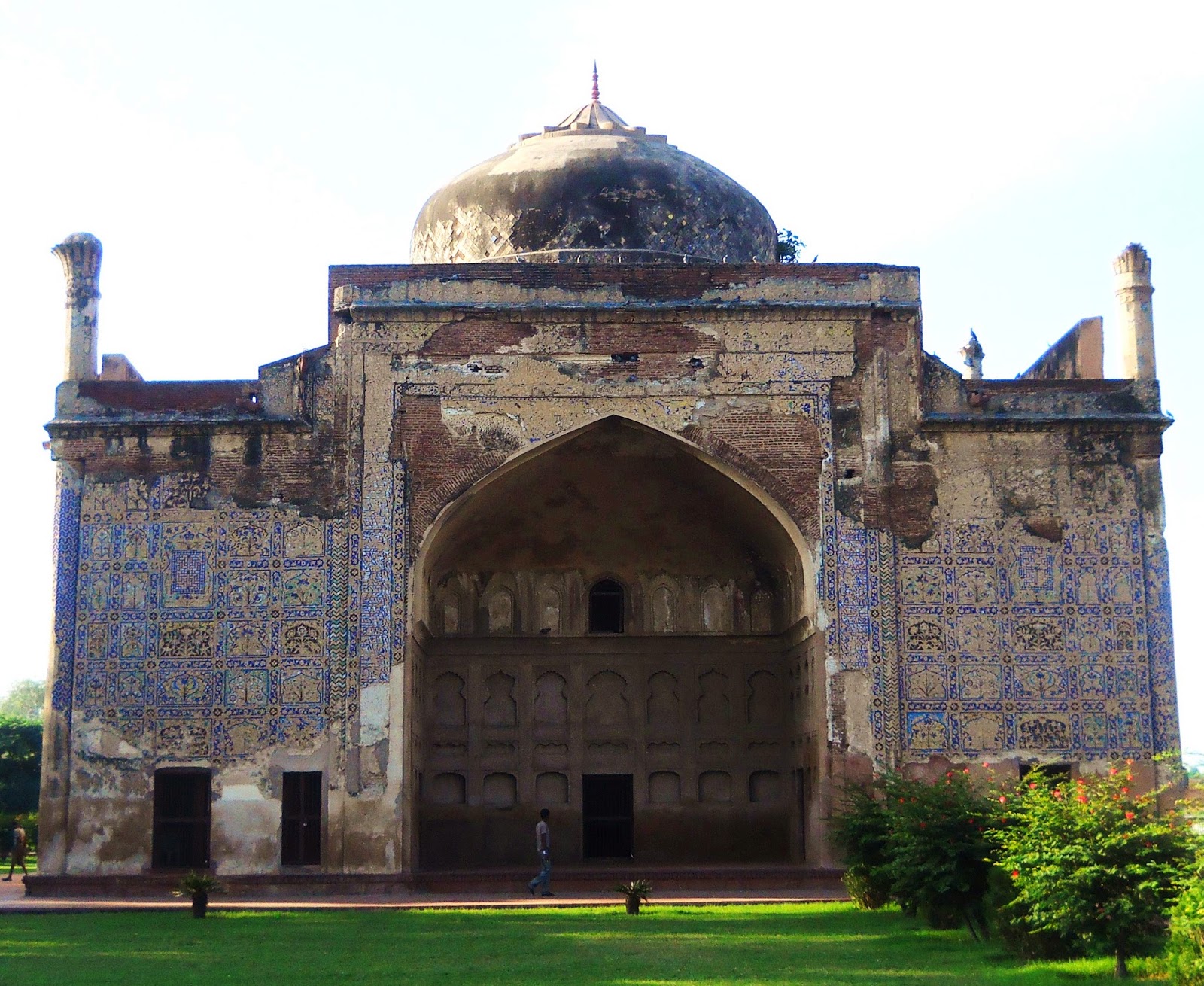 The north side of the Chini ka Rauza, which has the most surviving tile work. 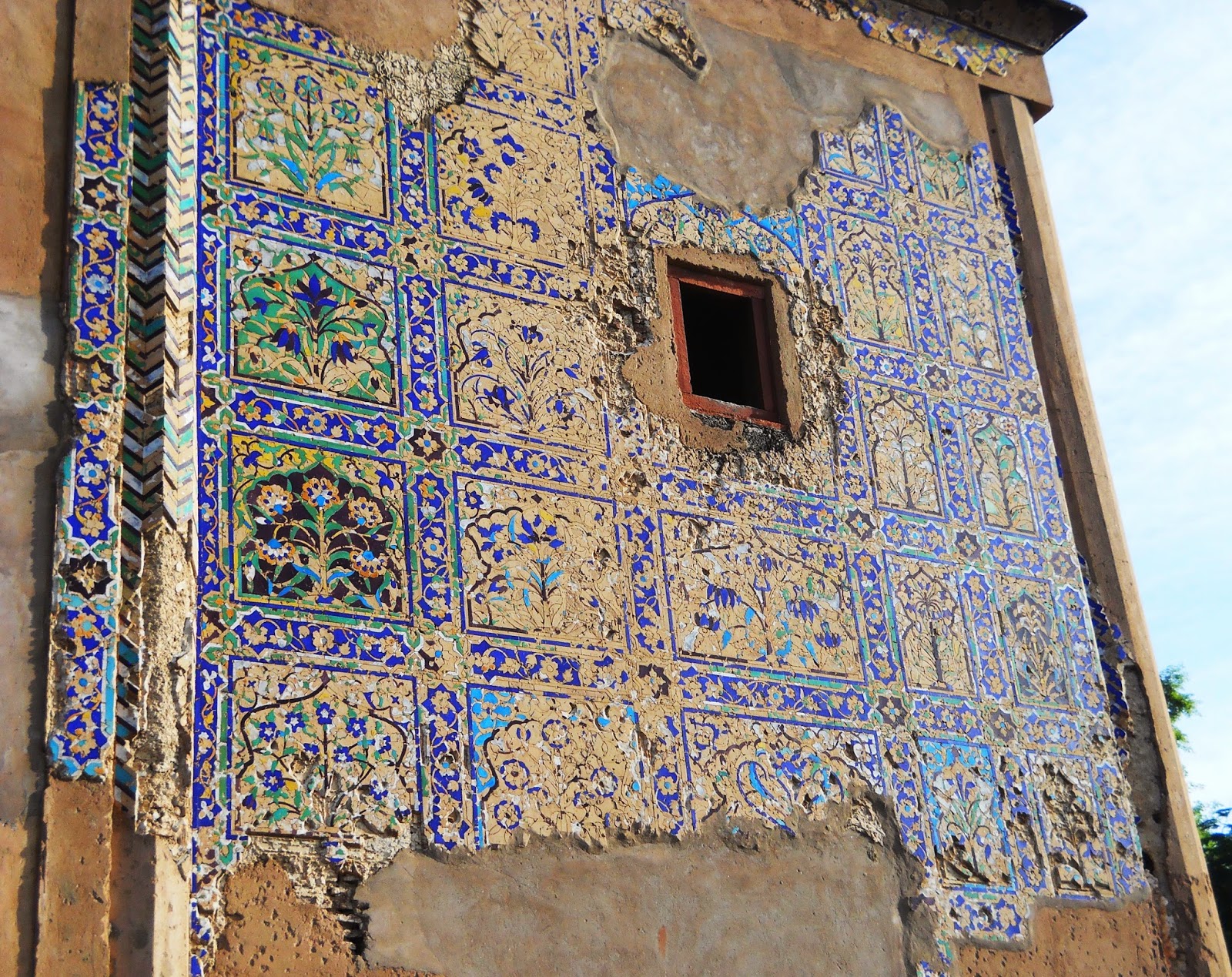 Tile work on the south side of the tomb. 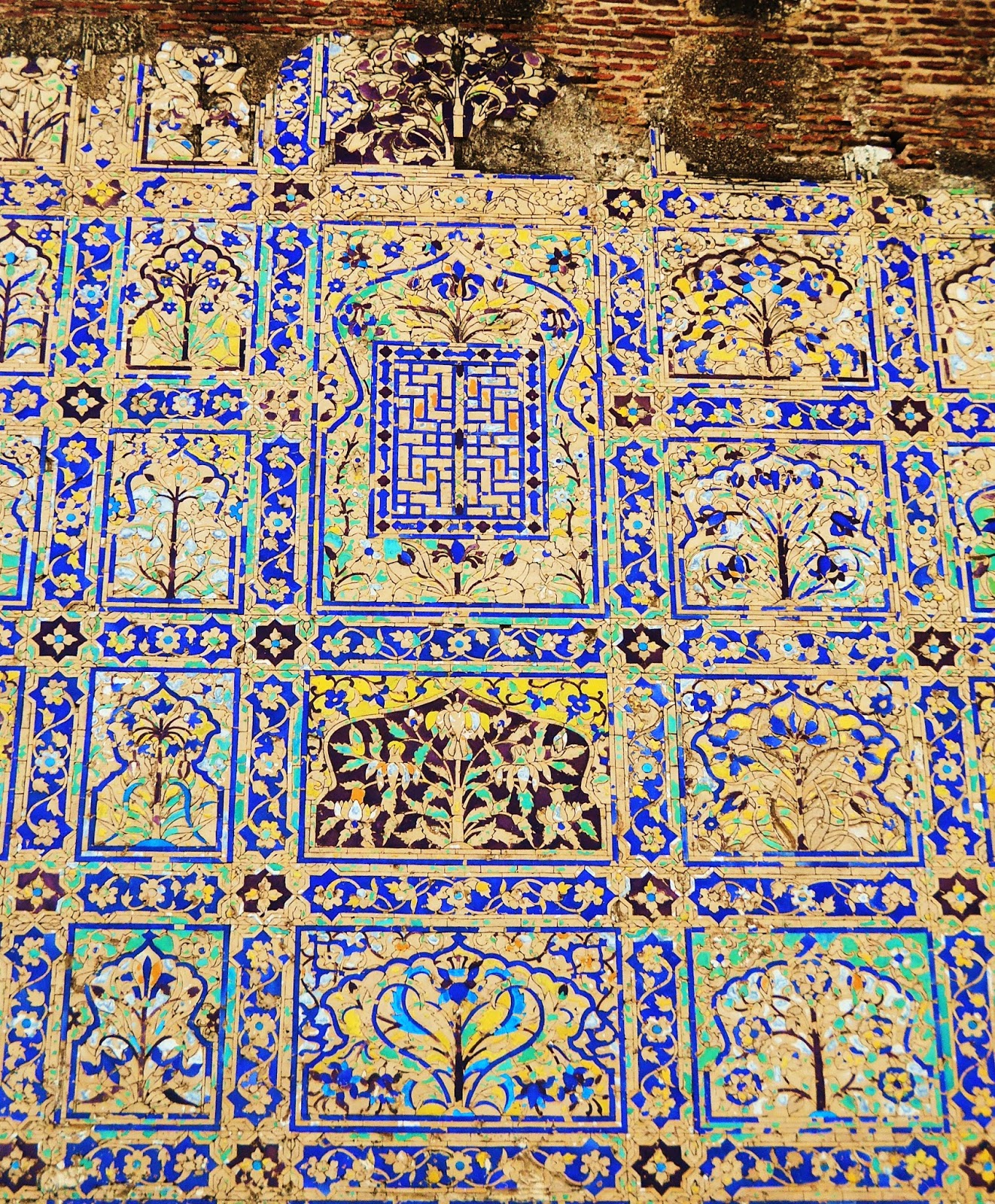 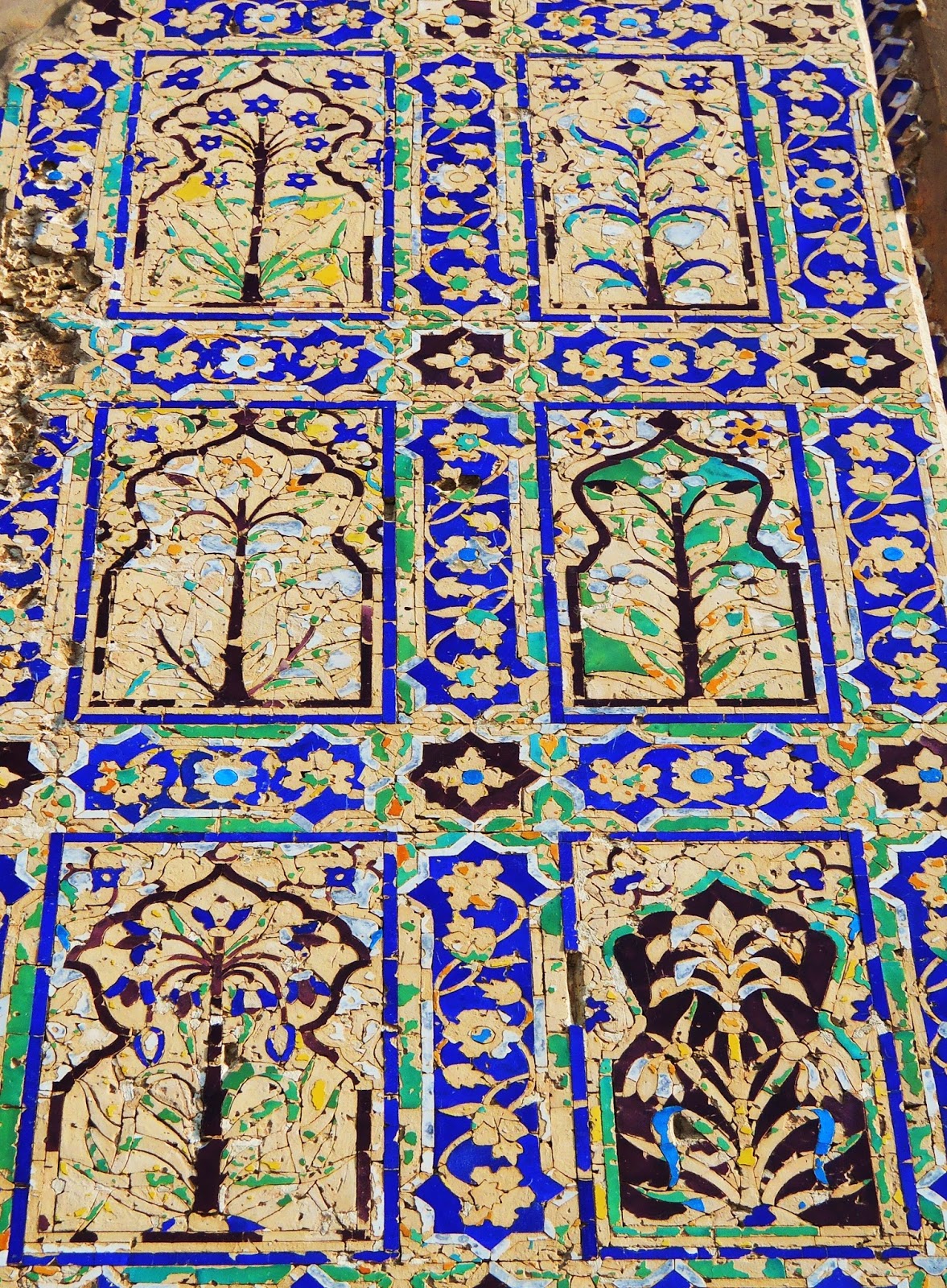 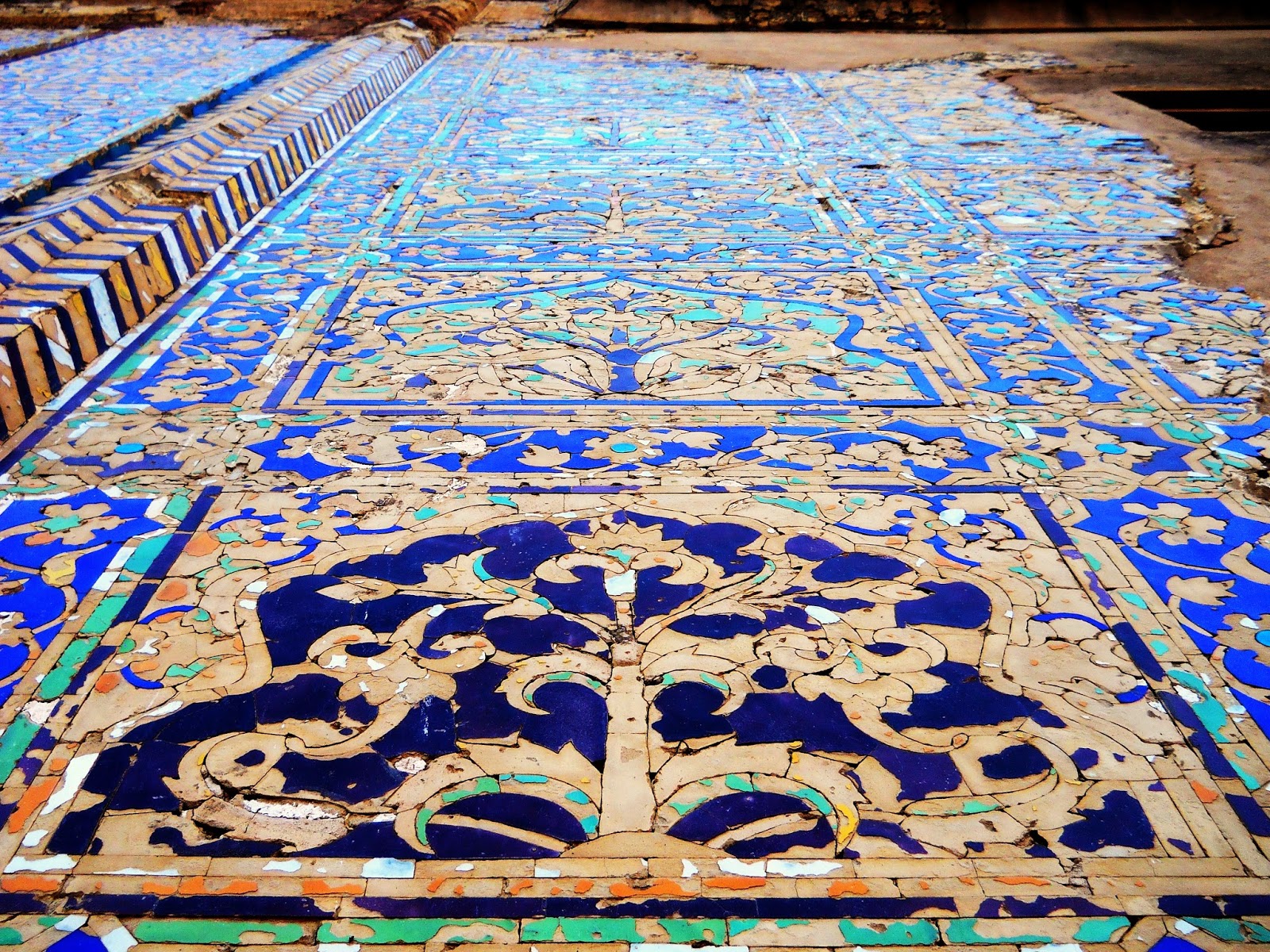 Close up on a well preserved tile work plant. 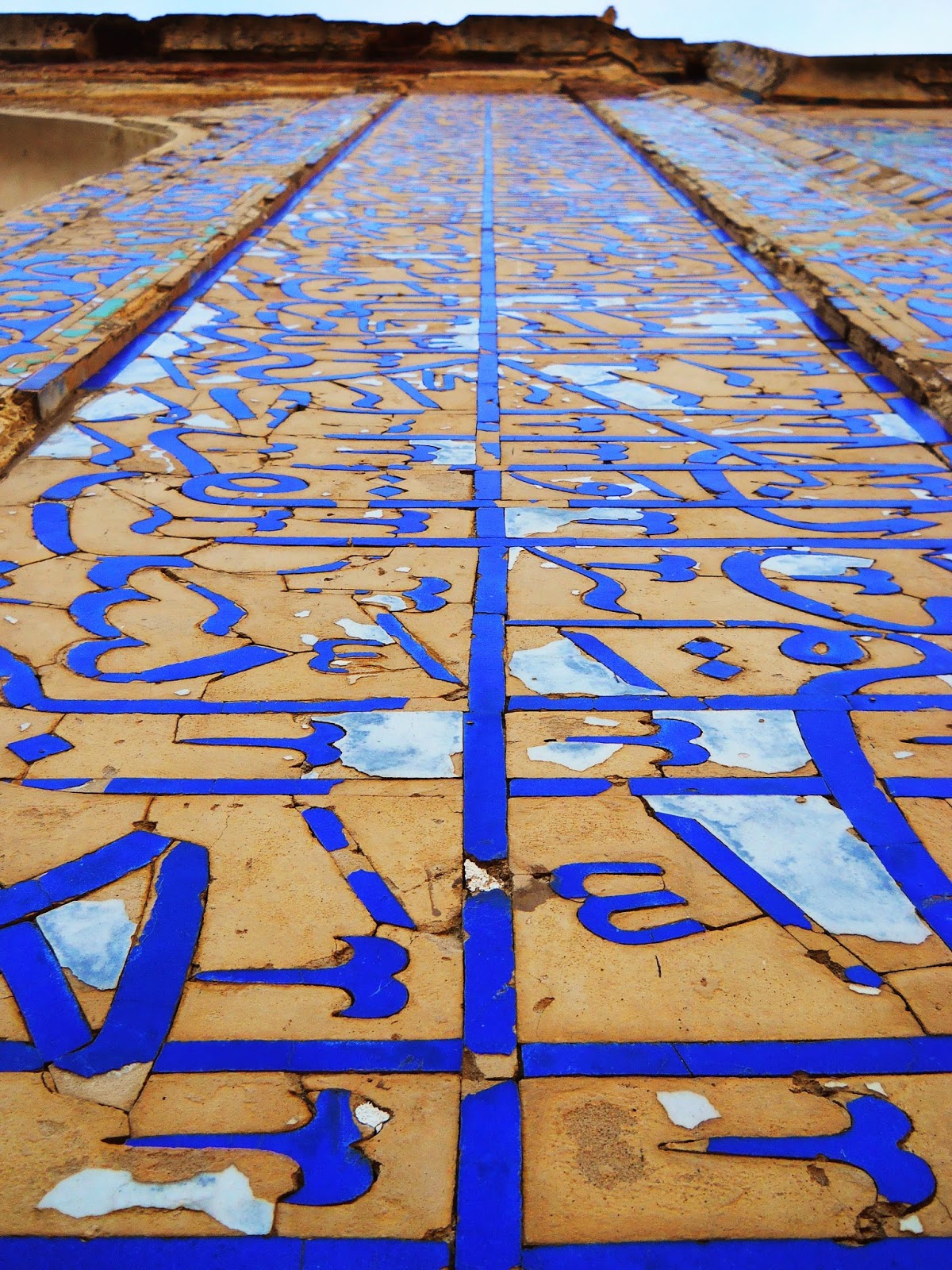 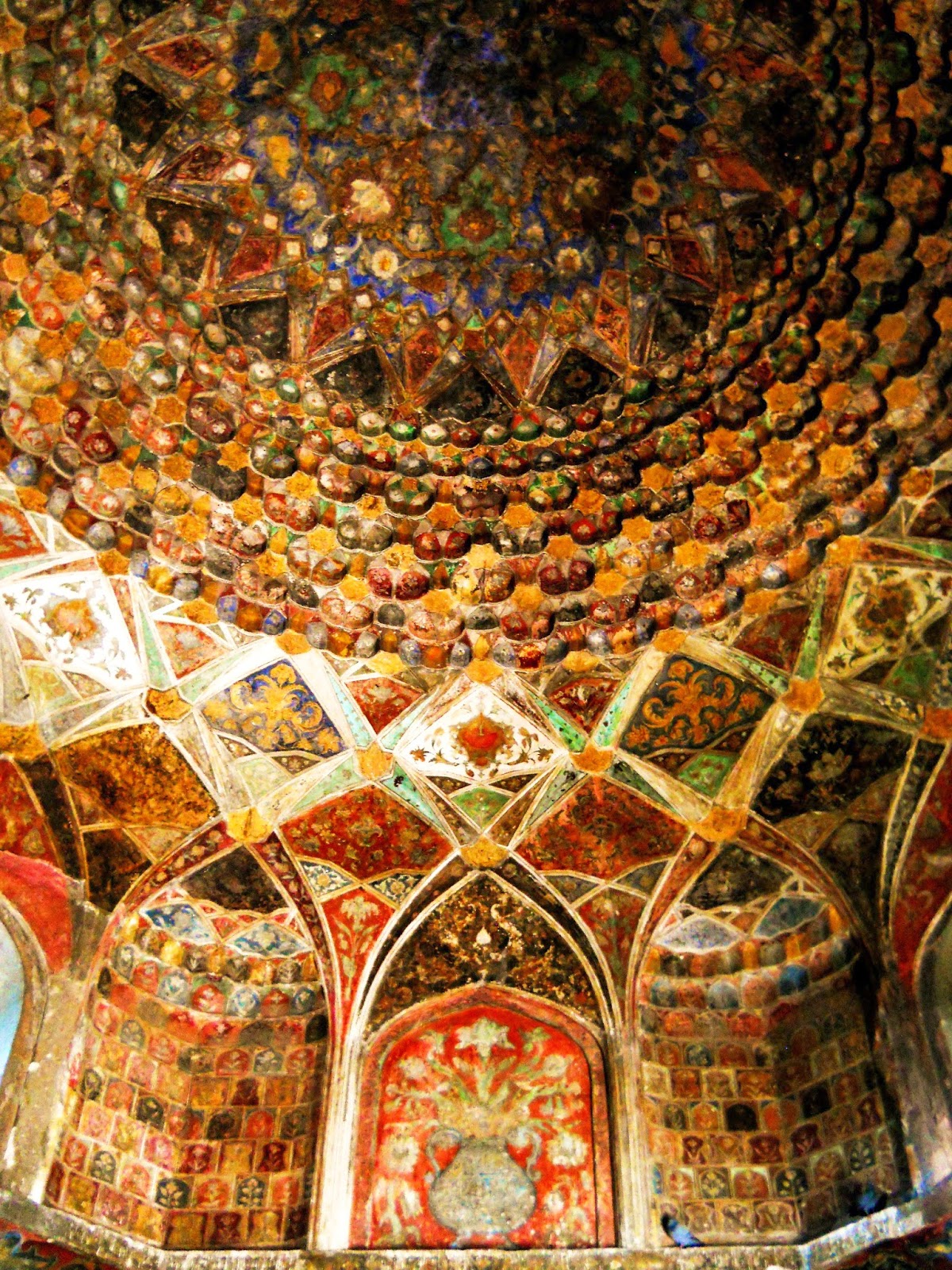 The interior of the Chini ka Rauza is also richly decorated, though you have to be able to track down the chowkidar to get in. These painting were apparently restored, though not in the last few decades, judging by their current condition. 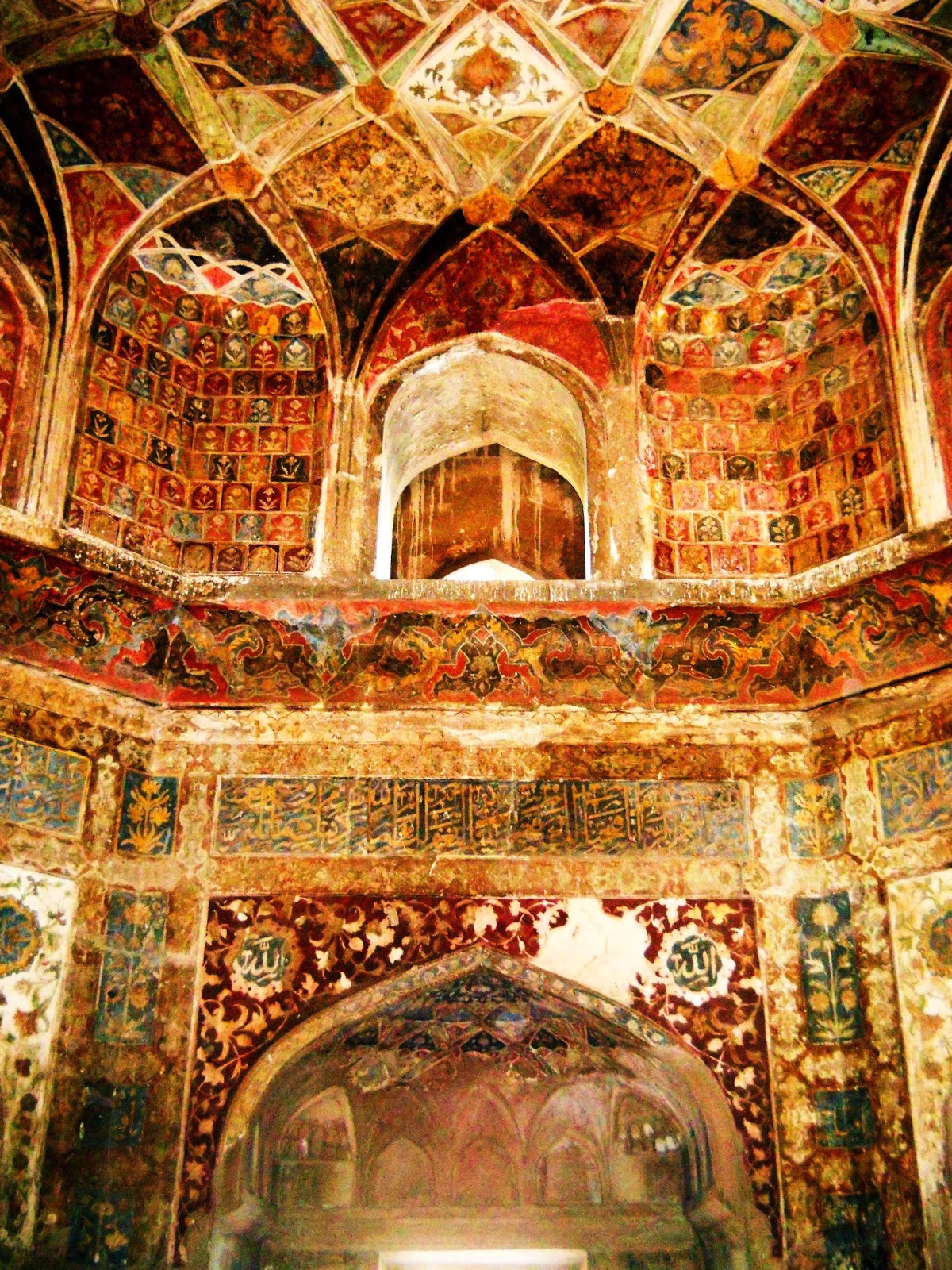 While the paintings certainly don't look new, and are very impressive in their own right, it's hard to say how much of them are original. A photo from the turn of the 20th century shows much less visible painting than is evident here. Apparently the tomb was used as a residence for a while, and many of the original paintings were covered in soot from decades of people building fires inside the mausoleum. 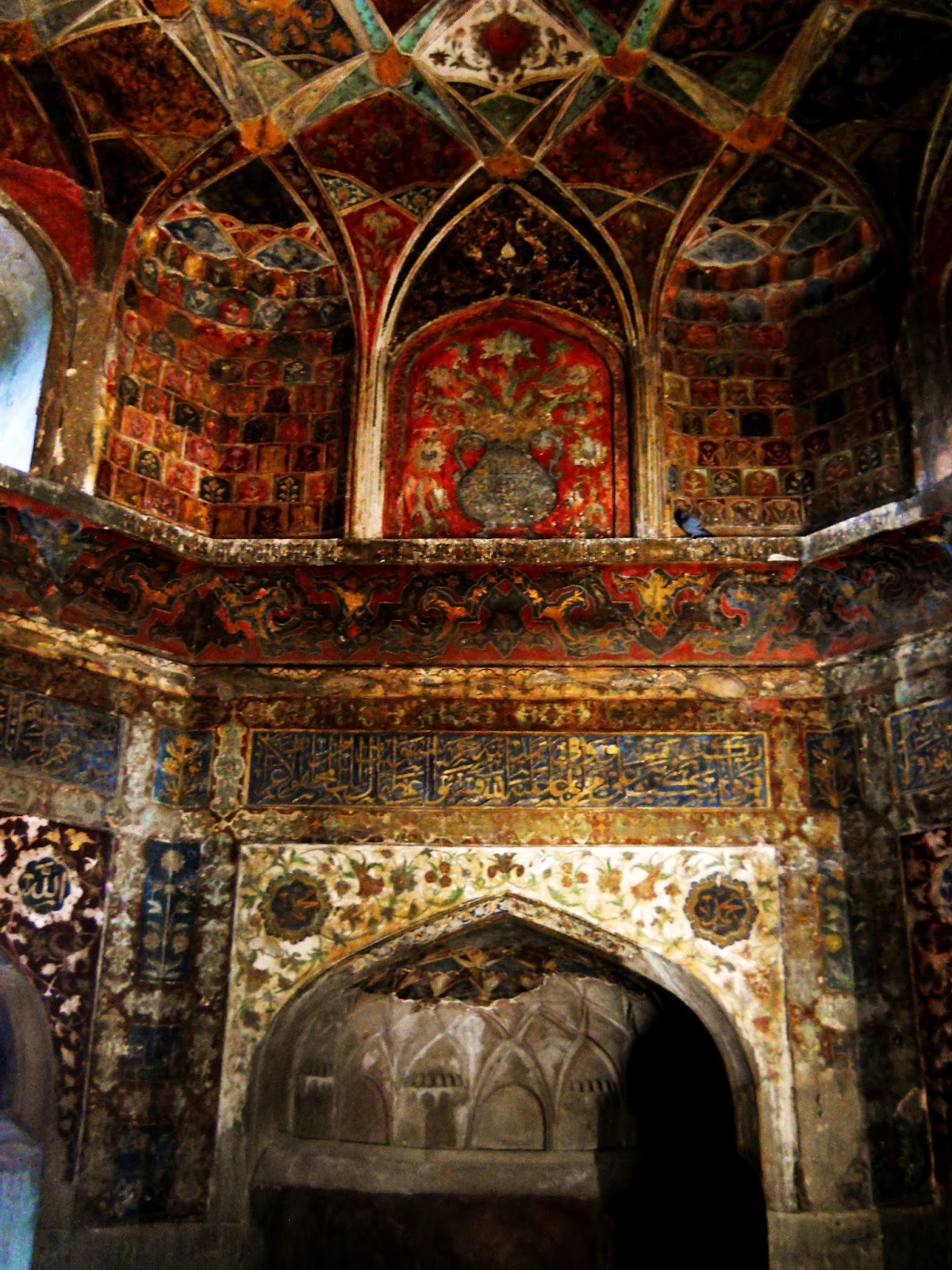 Still, certain parts of the interior decoration, such as the fragment of plaster under the arch in this picture, probably do date to the 17th century. 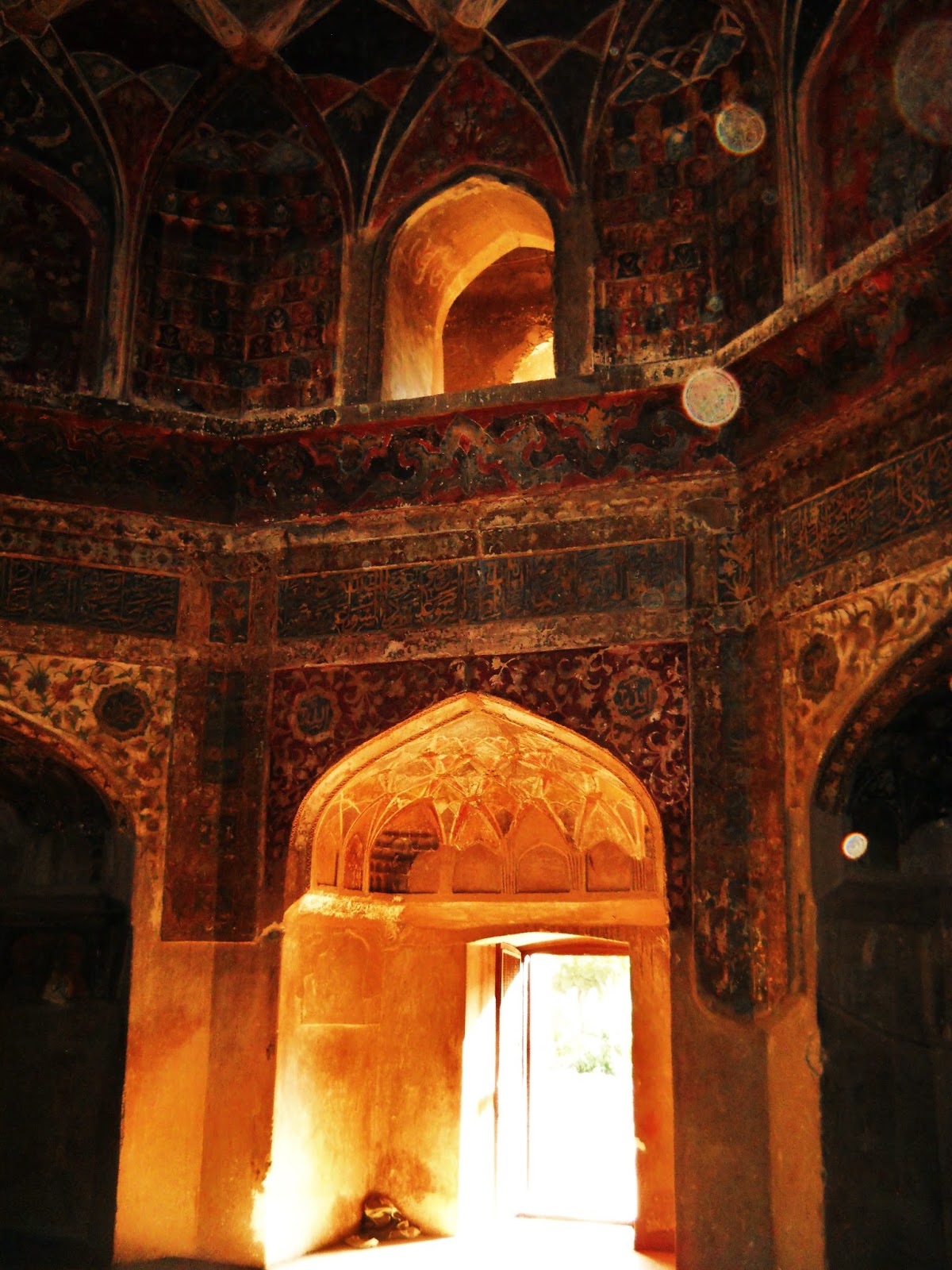 Light coming through the entrance to the tomb.

The tomb of Itimad-ud-Daulah is all too often left out of tourist itineraries, which is a pity, as it is one of India's most perfect architectural achievements. The Chini ka Rauza may have seen better days, but it's still a fascinating place to visit, and, like so many historical structures in India, deserves better care.

So, this is the end of my series on Agra. The city has its flaws, but a lack of things to see is not one of them. As fond as I am of Mumtaz Mahel's mausoleum, there is much more to Agra than the Taj. Spending only one day, or half a day, in Agra is really not enough time, and I think that the city as a whole would have a better reputation if visitors didn't hurry through it..... 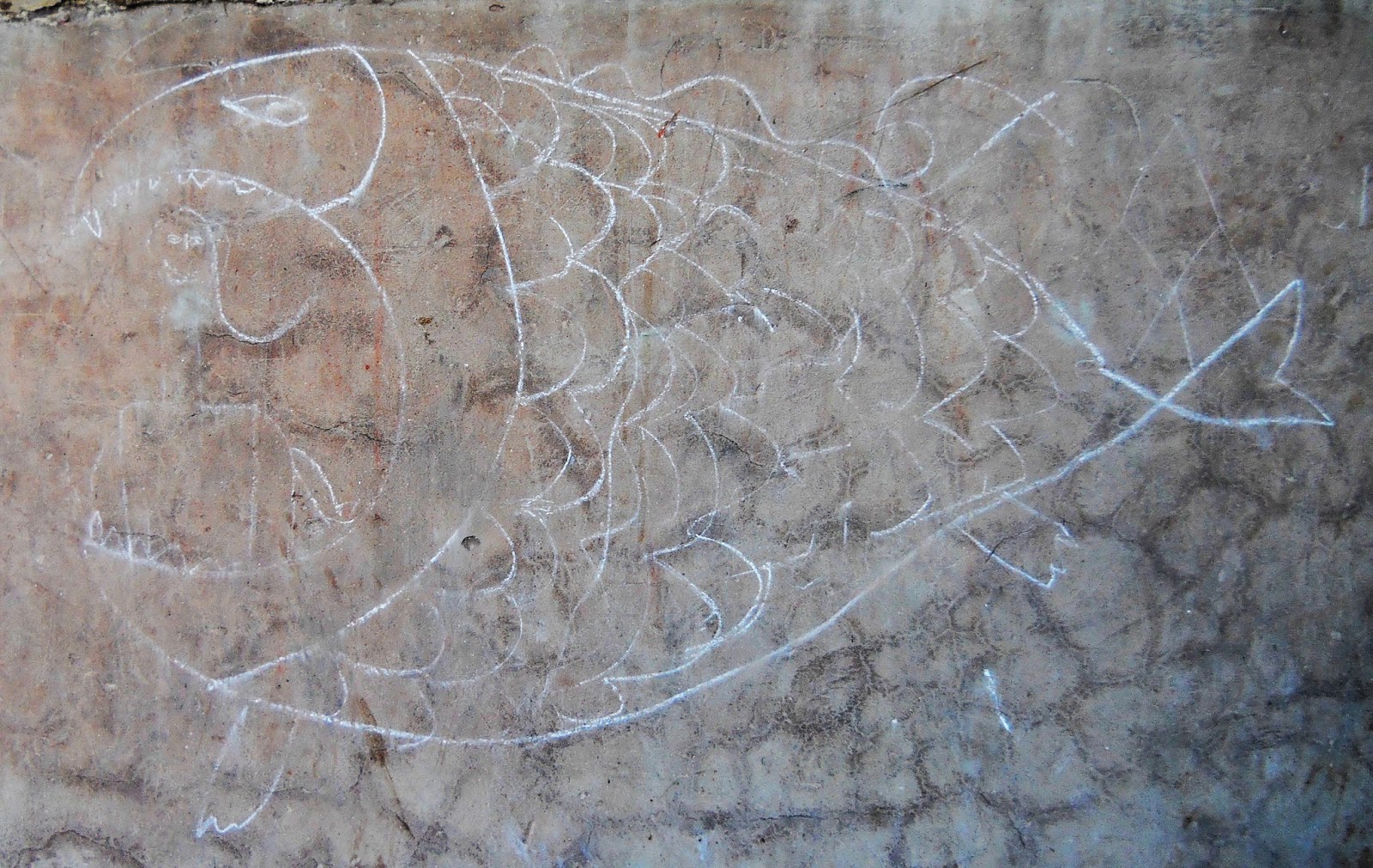 Graffity, presumably by a little kid, of a woman sitting in a fish's mouth, on the east side of the Chini ka Rauza.