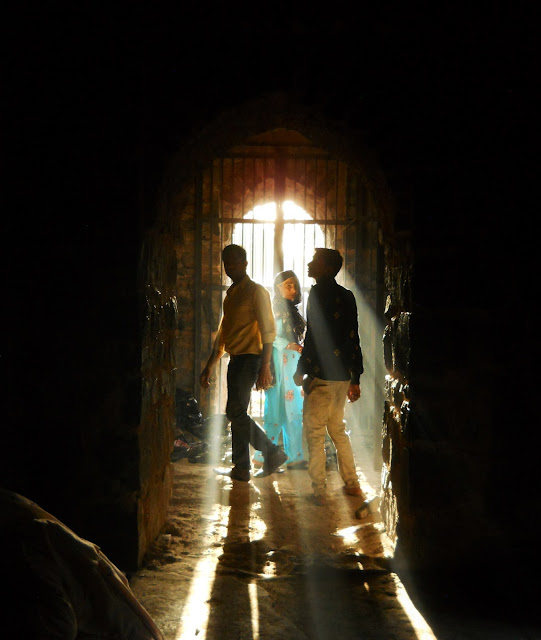 In a chamber under the Feroz Shah Kotla Mosque.

The ruins of Firozabad, the fifth city of Delhi, stand tucked away next to a giant cricket stadium, just south of the former line of the walls of Old Delhi. It's not on most visitors itineraries, and even people I've know who have been living in Delhi for quite some time haven't gone there. The reason for this is, I think, relatively simple: Firozabad, otherwise known as Firoz Shah Kotla, is not pretty. Rather, it's scary, immensely atmospheric, and is generally considered one of Delhi's primary centers of supernatural activity....It's not for the faint of heart. Visiting the ruins on a Thursday afternoon, when people come from the surrounding area to petition disembodied spirits for favours and forgiveness in dark, dungeon-like chambers in the sad remnants of a once grand, but now almost totally destroyed, 700 year old city, is one of the most intense experiences that Delhi, a city that is nothing if not replete with intense experiences, has to offer.


Firozabad was built by Firoz Shah Tughlaq, the third ruler of the Tughlaq Dynasty of the Delhi Sultanate, in the middle of the 14th century. Firoz Shah was successor to Muhammad Bin Tughlaq, under whom the Delhi Sultanate reached its widest extent. Muhammad Bin Tughlaq's reign was, however, marred by ill-advised monetary experiments and a disastrous attempt to shift the entire population of Delhi to the city of  Daulatabad in present day Maharashtra. His reign ended with much of the Tughlaq empire in revolt.

Muhammad Bin Tughlaq's successor is therefore remembered more as a ruler who brought stability to a troubled empire than as a great conqueror. Certainly, the succession from Muhammad Bin Tughlaq to Firoz Shah was the least bloody during the Tughlaq period.   His policy towards the breakaway provinces of the empire was to allow them to go their separate ways, while at the same time consolidating what territory he had left. In this, he was successful, though his record is blemished somewhat by his persecutions of Hindus. His reign was characterized by far fewer major military campaigns than was the norm, and the majority of these were failures. Still, he successfully held back the threat of the Mongols, and is generally agreed to have brought about a time of relative peace and prosperity in Delhi.

He was also one of Delhi's great builders, perhaps his most notable contribution to the architectural landscape of the city being the top two tiers of the Qutb Minar, the original top of the great minaret having been damaged previously.  He also built an entirely new city of Delhi, called Firozabad, next to what was then the shores of the Yamuna, but is now the smog-choked Ring Road.

Now, at one time, Firozabad was evidently a sight to behold. Not long after Firoz Shah's death, it was visited by the great Mongol conqueror Tamerlane, who, even while he was extinguishing the Tughlaq Dynasty for good and killing the majority of the population of Delhi, found it sufficiently remarkable to order the construction of a similar mosque in Samarkand. But the city later fell on hard times. As newer incarnations of Delhi sprang up in subsequent centuries, Firozabad was plundered for building material. Many of the structures inside the city were torn down, the rubble from the ruined buildings then being incorporated into newer constructions. The result, after six centuries or so of this, is not pretty. Firozabad really is totally ruined, and looks like it should be occupied by spirits....which, according to many, it is.

Starting sometime in the 1970s, a rumor started to spread that the ruins were the abode of djinns. In Islamic mythology, djinns are said to be beings that Allah made out of smoke before he made human beings. They're not ghosts exactly, nor are they evil, though they're powerful and you want to try and avoid making enemies out of them.

After Firozabad became rumored to be the home of djinns, people from near and far began to come to the ruined city to write letters and give offerings to the spirits in order to obtain their blessings and their forgiveness. Now, on a Thursday afternoon, the complex, which is usually largely empty, is full of people seeking to gain the favour of the djinns.

I went to Firozabad twice. The first time it was in the morning and I had virtually the whole complex to myself and could wander at will. The second time I went on a Thursday afternoon with my girlfriend Aneesha, and that proved to be much more of an experience,  though with so many people there it wasn't possible to wander around the ruins quite so much...though the lighting was much better...Anyway, the photos below are from both trips. 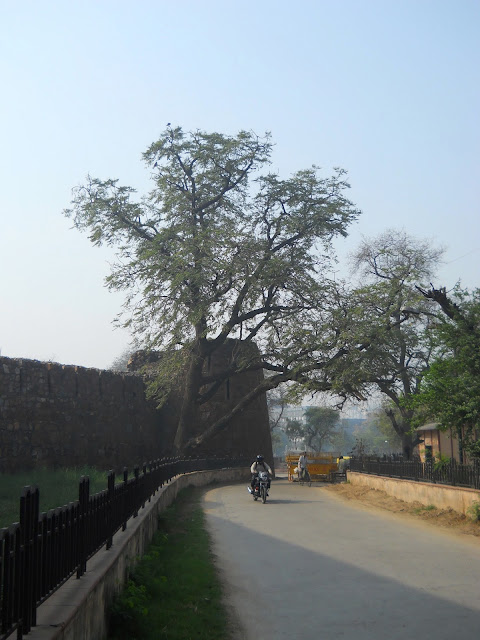 Walking up to the front gate of the ruined city. Firozabad is just south of Old Delhi, and is somewhat set back from Bahadur Shah Zafar Road. Right next to it is a giant cricket stadium, also titled Firoz Shah Kotla (which means Firoz Shah's citadel). Both names for the ruins, Firoz Shah Kotla and Firozabad, are rather confusing. More people have heard of the Firoz Shah Kotla cricket ground than the ruins, while Firozabad is the name of a number of other cities elsewhere in India. 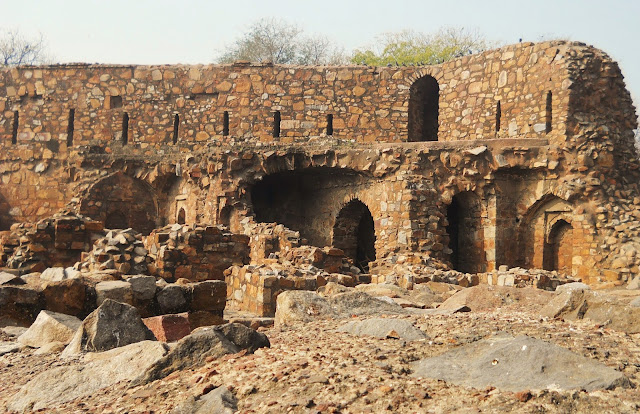 The ruins of the city. 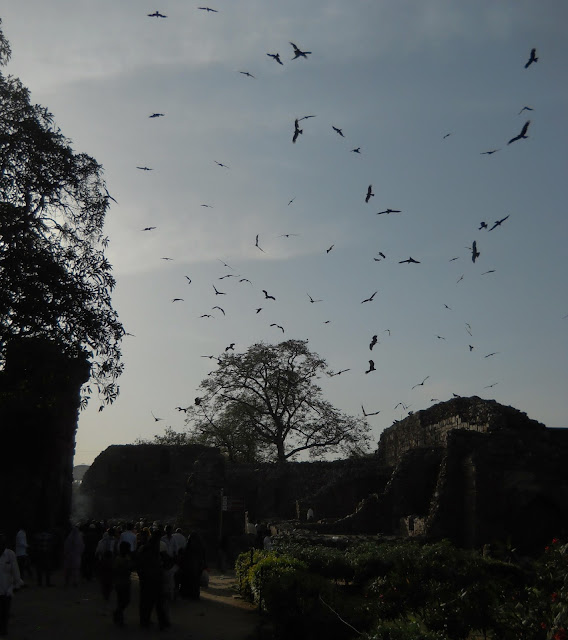 Ruins and Kites on a Thursday afternoon. When people give their offerings to the Djinns, they frequently include bits of edible stuff, which draws swirling hordes of hawks. 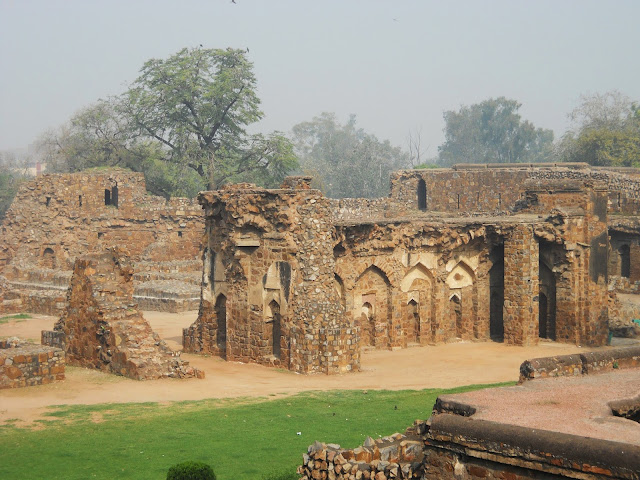 Looking towards what remains of a now largely stripped away palace complex. 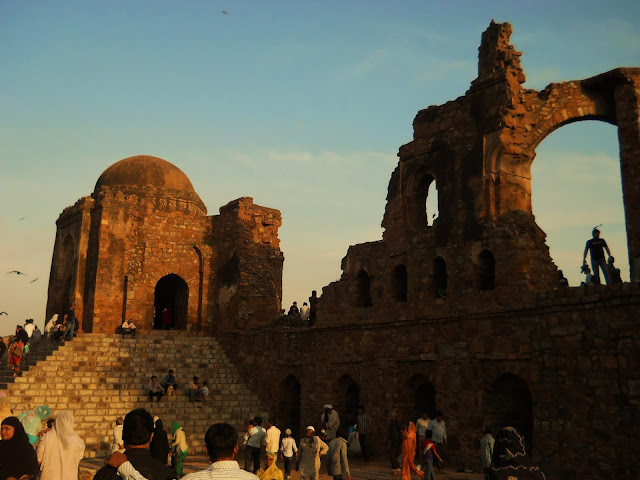 The Firoz Shah Kotla Mosque. Like most of the buildings within the city, the majority of the mosque has been stripped away, though the qibla wall, parts of the northern wall, and the domed gateway you can see to the left, survive. There is also a network of passageways and chambers underneath the ruins which remain intact. 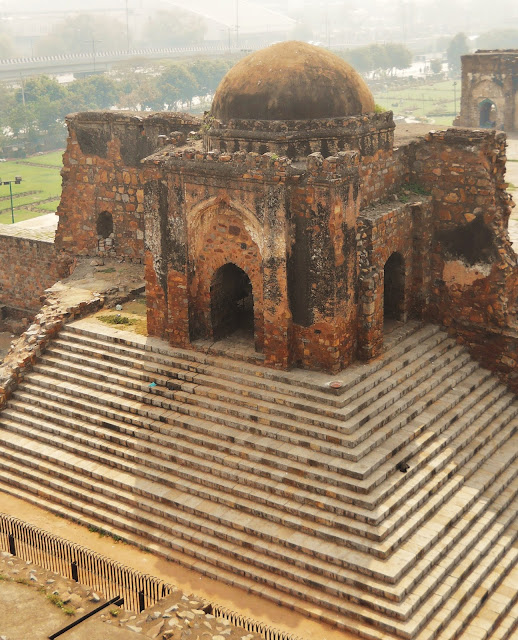 Another view on the domed gateway. When Tamerlane visited in the late 14th century, this mosque was the largest in India. However, these days nobody knows what it looked like in its pre-ruinous state. The flat area behind the mosque was once the course of the river Yamuna. 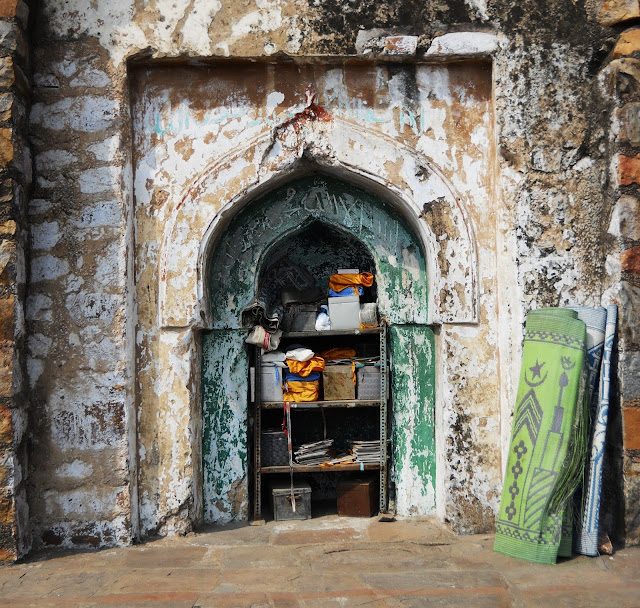 A small prayer niche in the side of the qibla wall stuffed with holy books and various religious oddments. Though the mosque is in such a sorry state of disrepair, it's still a very active place of worship, and receives crowds in the thousands on Fridays. 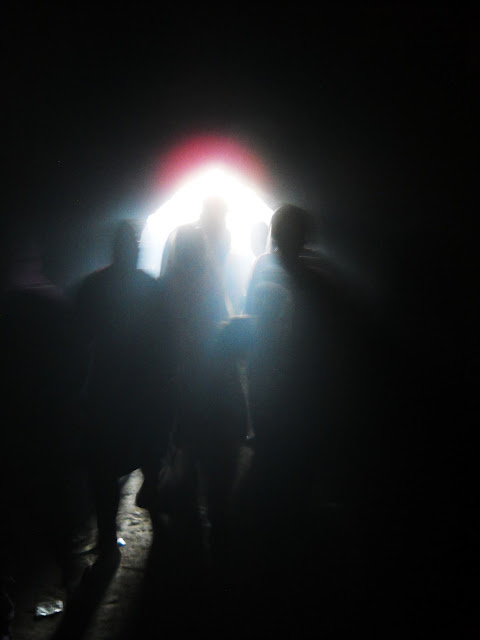 The djinns of Feroz Shah Kotla, in a chamber under the mosque...actually, these are people going to pray to the djinns, as viewed through the smoke of hundreds of candles. 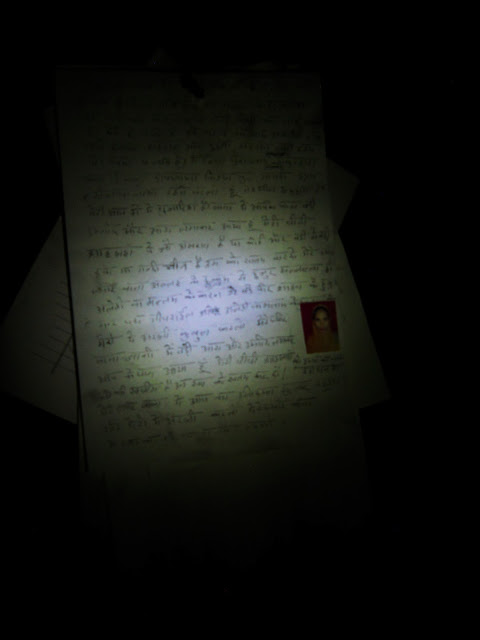 A petition to a djinn. This was on my first visit to the complex. Then, Ferozabad was to me just a place on a map south of Red Fort. I knew nothing about the city other than that it was built by Firoz Shah Tughlaq. I remember walking down into the chambers under the mosque, and seeing these letters stuck to the insides of alcoves. I had no clue what was going on. I remember there being a very unsettling air about those ancient enclosed spaces inside the ruins. They certainly felt haunted, if no more so than many other Delhi ruins. These letters are sometimes appeals to the spirits for aide, and are sometimes confessions, the idea being that the djinns have the power to forgive sins. 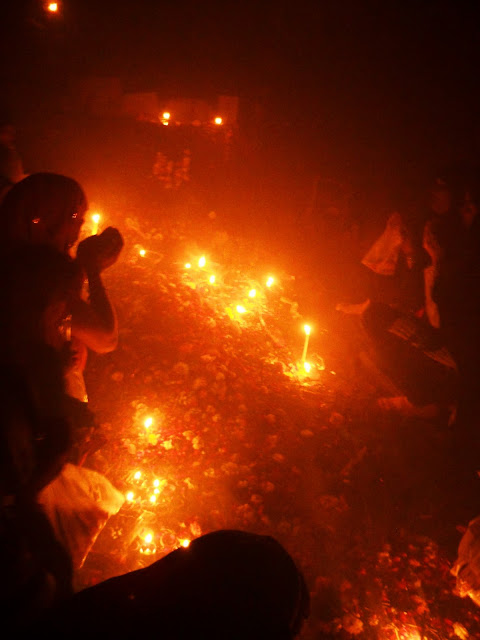 Praying to the djinns of Feroz Shah Kotla in one of the chambers under the mosque, on a Thursday. Once you've made your prayer, you're supposed to leave the room walking backwards, so as not to turn your back to the spirit, which is viewed as inauspicious. From what I've read, many orthodox Muslim clerics don't condone the practice of praying to the djinns. That being said, the practise is by no means limited only to uneducated people. Higher class, well educated Indians will sometimes seek the blessings of the djinns. 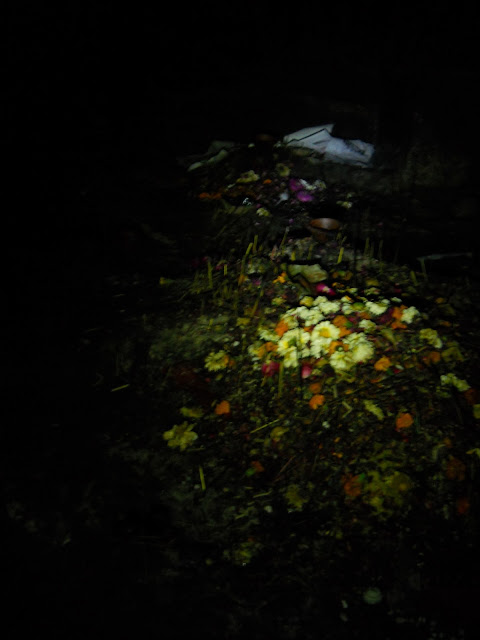 One of the chambers under the mosque, not on a thursday...many of the offerings wind up lying around rotting on the ground. 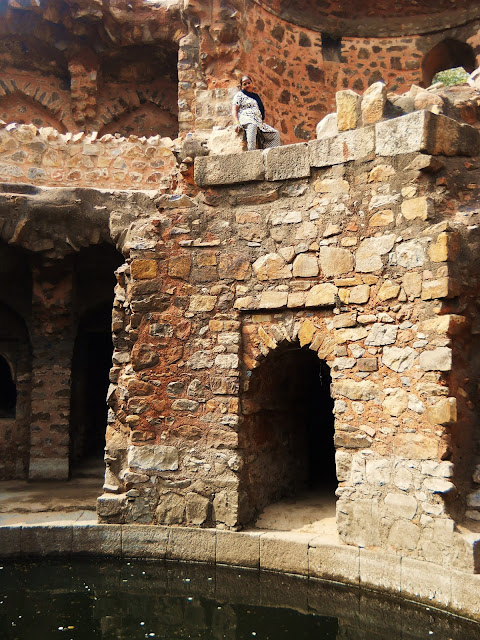 Feroz Shah Kotla circular step-well, in a different part of the complex. That water had big cat fish swimming around in it. Apparently it was technically closed due to incidents of people committing suicide there. However, that woman you can see at the top of the picture let me in anyway, for a tiny tip. 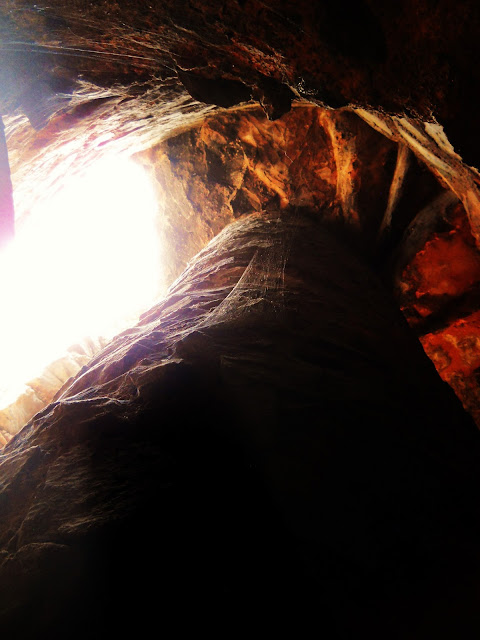 Looking up at a creepy circular stairway inside the step-well.


Ruins and an Ashokan pillar, on a busy Thursday. The ruin is simply referred to as the "Pyramidal Structure," which indicates that the Archeological Survey of India doesn't know what function it used to serve. The building has been declared off limits, again, in the interest of public safety...you can see here how well that works.

An arch and a beam of light inside the "Pyramidal Structure." 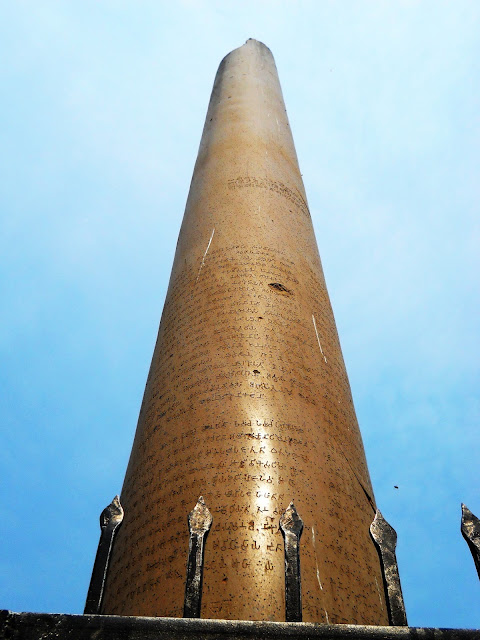 Firoz Shah Kotla Ashokan pillar. The pillar dates from the 3rd century BC. It was made at the behest of the first truly pan-Indian ruler, and one of the most important figures in the spread of Buddhism, the Mauryan emperor Ashoka. The inscription is in an early Indian script called Pali, and is a list of Ashoka's edicts on such subjects as good governance and the proper treatment of animals. Firoz Shah Tughlaq apparently stumbled on it while he was out campaigning, and then, using the forced labour of an entire district, had the 27 ton pillar dragged to Delhi and placed atop the "Pyramidal Structure." You can see here that the top has fallen off. I've run across different accounts as to why this happened. One said that the top fell off while they were hoisting it up into its current position. Another stated that the pillar was damaged during the Sepoy Rebellion. An Archeological Survey of India pamphlet claimed that the Firoz Shah put a gold capitol on top of the pillar, which was subsequently robbed....I have no idea which story is true.

I admit, I never actually saw a djinn there, though if formless ancient beings made from smoke before the coming of man were going to exist at all, Ferozibad is definitely where they would live.