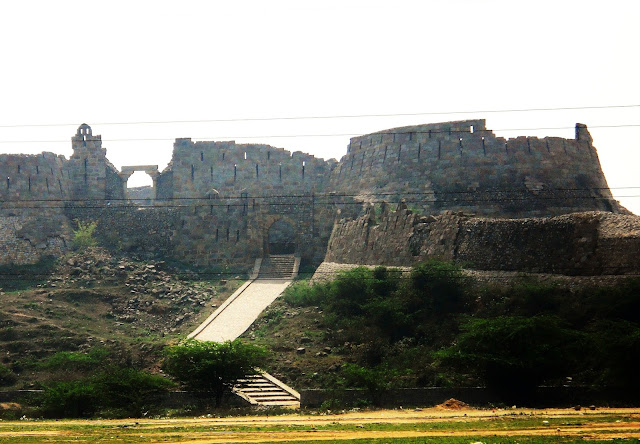 The evil countenance of Adilabad Qila, as far as I can tell Delhi's least visited fort.

Tughlaqabad, the former stronghold of the third dynasty of the Delhi Sultanate  is a truly vast complex of ruins, most of which are rarely visited. Even the area's primary attraction, the citadel of Tughlaqabad Fort, is far from being at the top of the average tourist itinerary. I think that the main reason for this is simply that most ruins from the Tughluq period are much more functional than they are beautiful. They have a harsh, forbidding, and rather unlovable aspect to them, which is of course what makes them so interesting, but also means that they don't draw people in the same way that the grander Moghul constructions do. That being said, the Tughluqs have nonetheless left behind quite an extensive architectural legacy (along with spinning off a number of  other important Islamic dynasties in India, such as the Bahmanids in the Deccan, who would go on to create a huge array of architectural works of their own.)

I had been to Tughlaqabad Fort a few times before, and had first seen it in the Hrithik Roshan film "Lakshya", where the song "Agar Mein Kahoon," was filmed. But when I visited, I would see, about a mile distant, a whole other ruinous defensive structure rising up out of an expanse of flat-land. This was the fort of Adilabad, a secondary fort in the Tughlaqabad complex, which was built in a similar style, though rather later. It has intrigued me for a while, and finally, a few days ago, I went and visited. 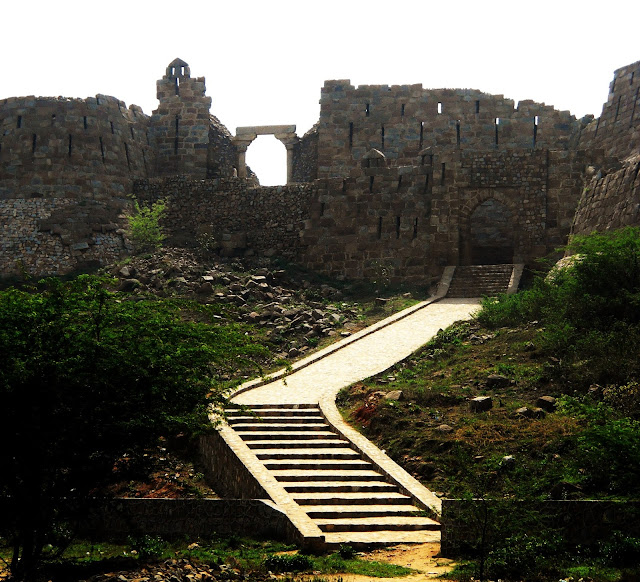 The way up to Adilabad. That stairway in the foreground is new, apparently built to coincide with the 2010 Delhi Commonwealth Games. The municipal authorities appeared to have expected that Adilabad would see more visitors then, but I doubt it. For one thing, unlike Tughlaqabad Fort, which is right up against a highway, Adilabad is set back from the road some distance, and it's by no means clear how to reach it. In fact, because there are trees next to the road, you could drive right by and not see it. There's no parking lot, and the signs for the fortress are fairly small. Certainly, I was the only visitor at the time, and the one security guard there gave me a rather odd look. 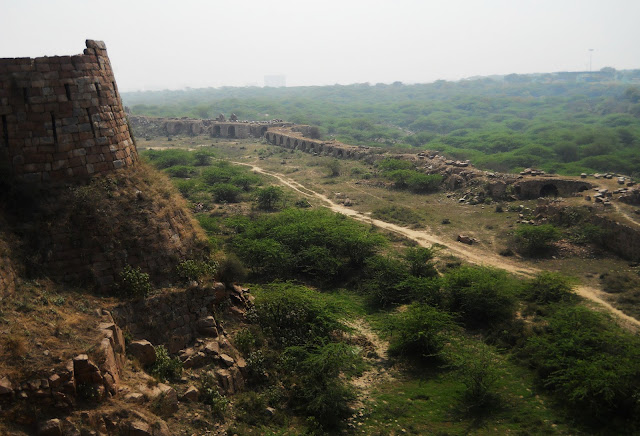 Crumbling inner wall, and even more crumbling outer wall. Though some restoration work has been done on Adilabad, most of the fort is being allowed to fall to bits. Not that most of it hasn't already. Tughlaqabad Fort was apparently only in use for a space of less than ten years, and unlike so many Indian forts that get reused by successive rulers, as far as I know Tughlaqabad had fallen into disuse by the time of Timur and has remained so (though, I am no expert). 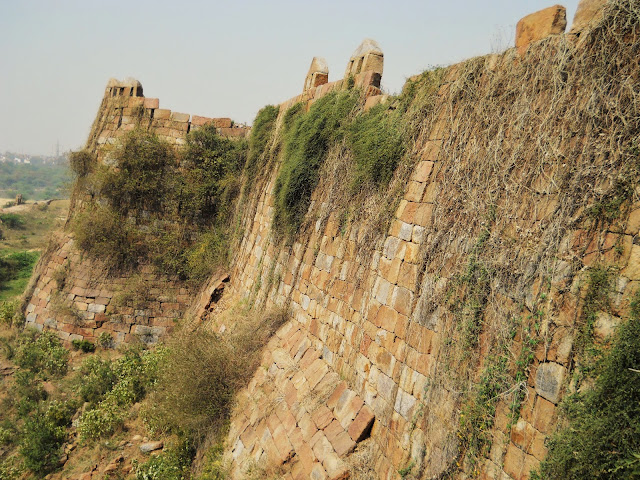 Old walls of Adilabad. Or, as H.P. Lovecraft would describe them: "Forbidding parapets of monstrous antiquity." I found myself reminded of Lovecraft stories here,  particularly "At the Mountains of Madness," and "the Shadow Out of Time." The vast, crumbling, unadorned rubble and masonry walls of the complex feel alien and like something built by Great Old Ones. I think if H.P. Lovecraft were to have been confronted with India, he would be filled with such a potent combination of fascination and revulsion at its "Seas of flesh and dizzying gulfs of time," that he would simply pop before he even left Delhi. 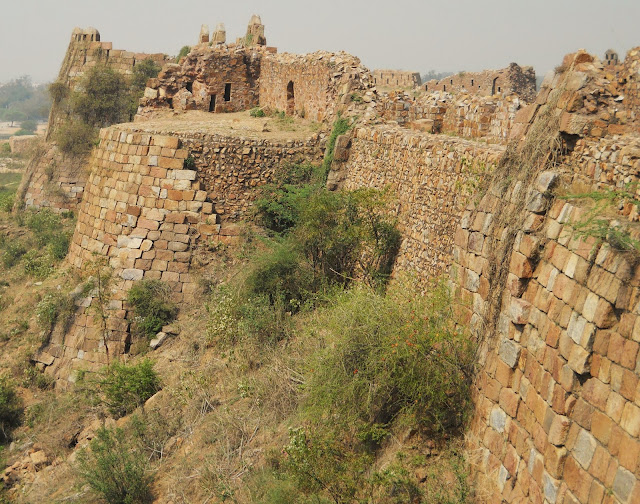 More ruinous walls. Most of the surviving buildings from this period were constructed with a sort of rubble cement, with an outer covering of masonry. Here you can clearly see places where the outer covering has fallen away. 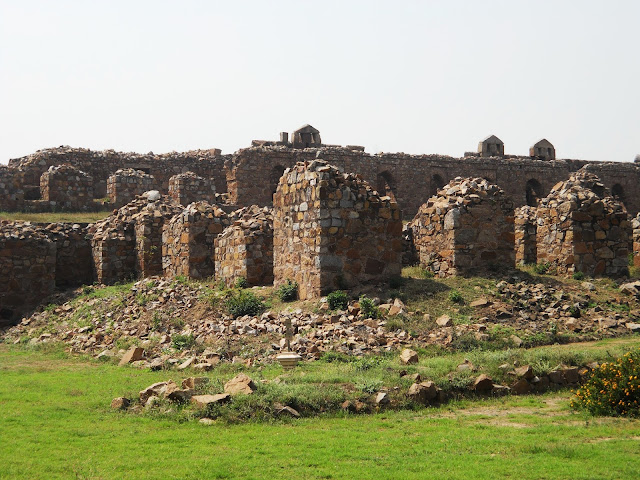 The crumbled ruins of a palace in Adilabad. 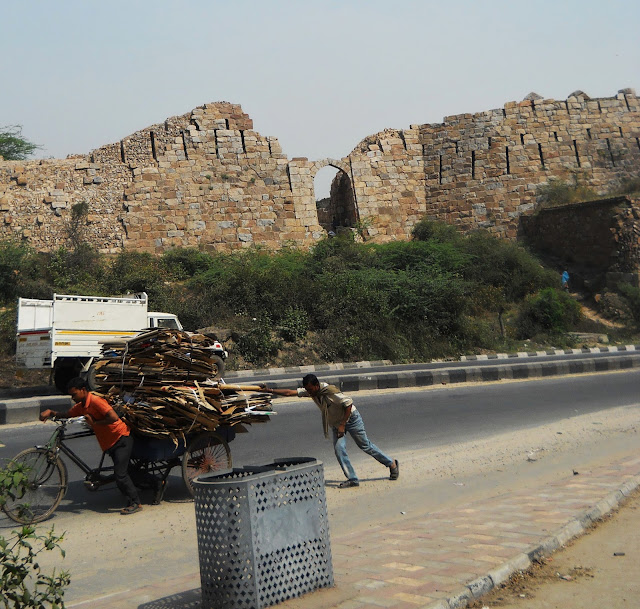 Guys pushing a cart of cardboard in front of the outer walls which surround Tughlaqabad. These walls go on for miles and miles. Large portions of them are set well back from the road, and are not undergoing any sort of restoration. They also enclose a large slum, which is almost certainly best avoided by the likes of me. Still, it raises the question of how many important or interesting structures are concealed by the slum or are hidden in remote corners of the complex. 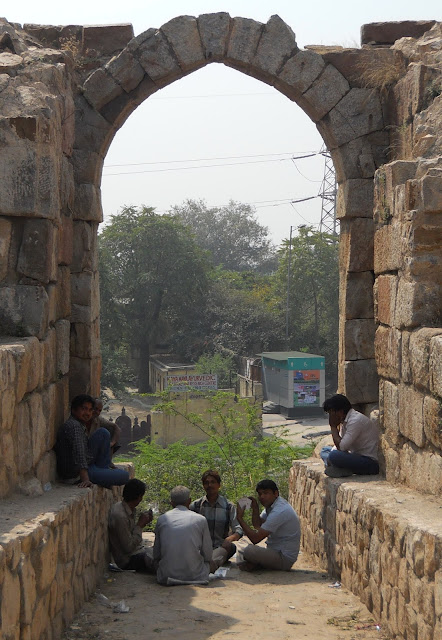 These guys were playing cards in a minor gateway in the outer walls around Tughlaqabad, when I came around...They were pretty surprised to see me. 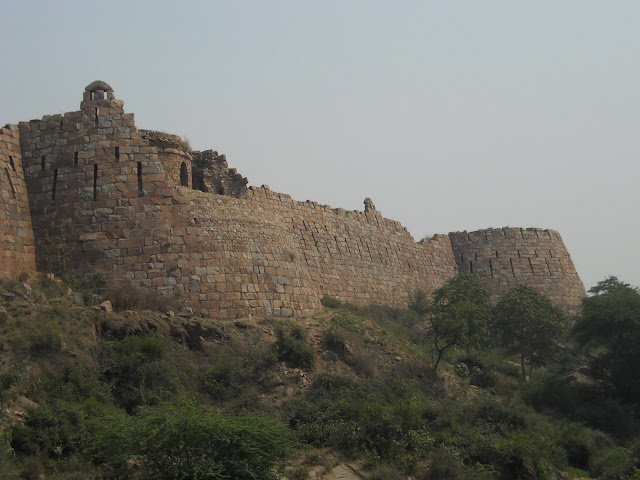 Vast and still formidable ramparts. The Tughlaqs apparently built these with the Mongols in mind. There were a number of Mongol forays into North India during the Tughlaq period, which the Delhi sultans effectively repulsed, though they weren't so lucky in dealing with the next wave of world-shattering central Asians, the Timurids. 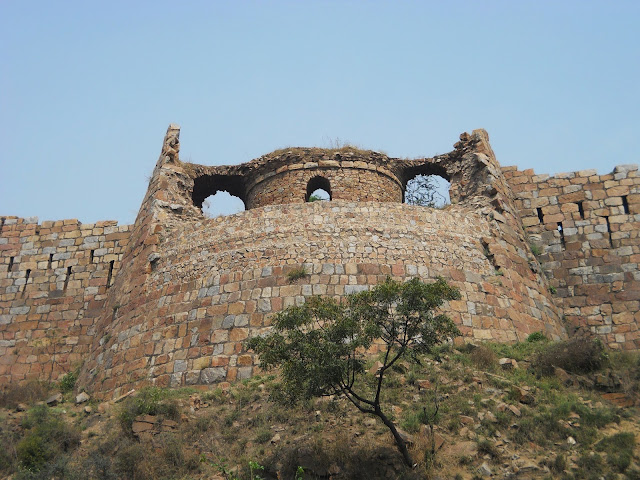 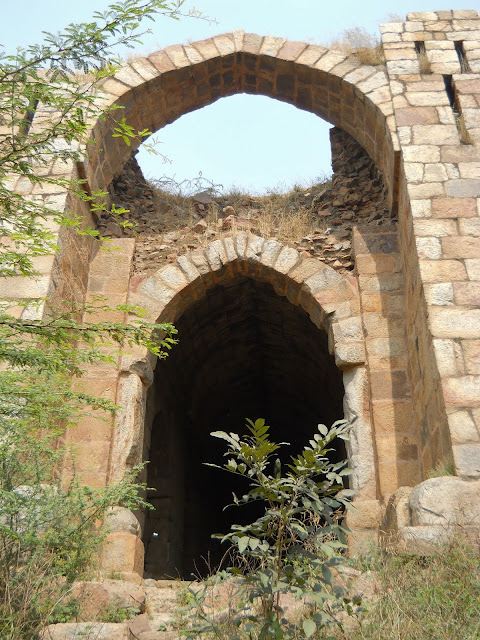 Perhaps the most interesting thing I found that day, though it was difficult to get a proper photograph of it. This is a rather huge, though now seemingly forgotten, gateway that leads though the outer wall, just about at the angle where the parapet makes a turn to the north. The opening is perhaps 25-30 feet high, and it leads into a dark, lofty arched chamber, which is in a fair state of preservation, even though no restoration work appears to have been done recently. You can see the gate from the road, though it appears much smaller than it actually is. There is no longer a well defined route to get to it, just a sort of overgrown cow-track. 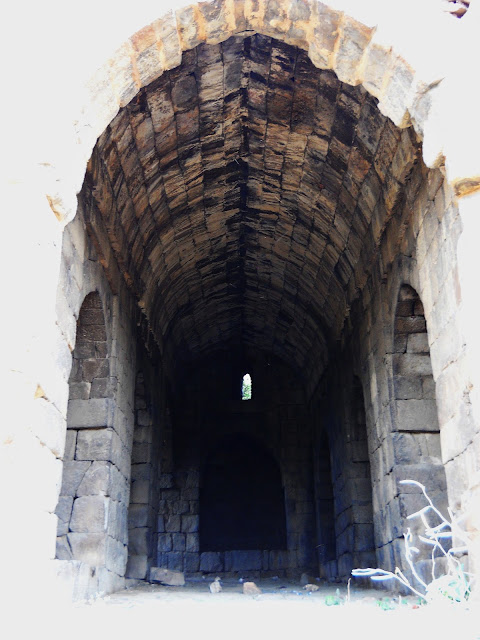 The interior of the gateway...the picture is overexposed because the sun was directly overhead, but this at least gives an impression of what the place looked like. 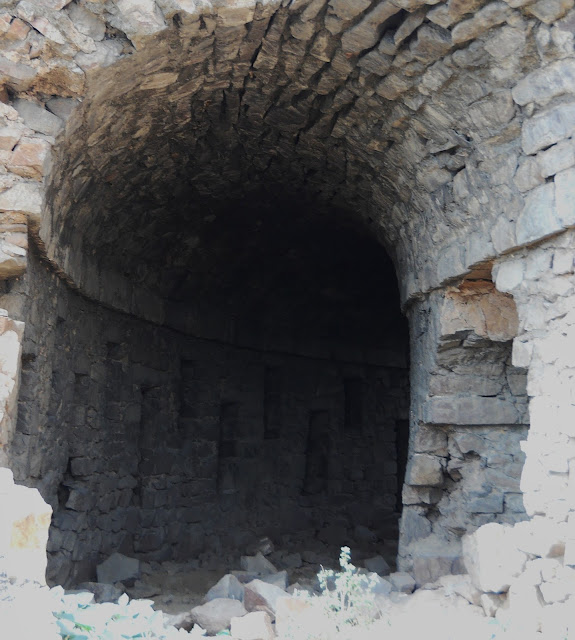 Inside of a ruinous bastion. 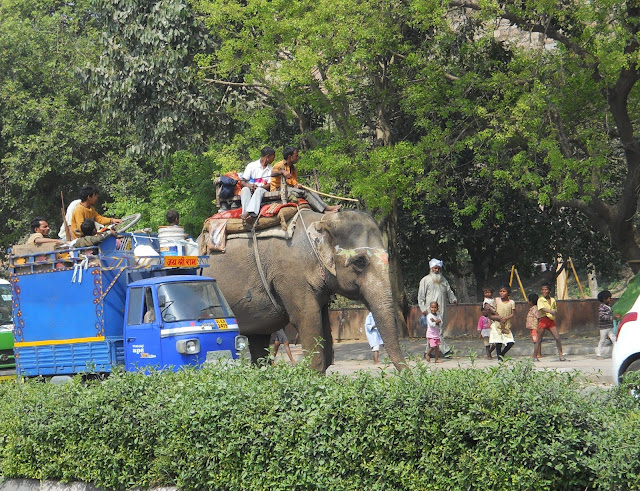 I know that elephants in the street are something of an India cliche, but oh well. Those kids were from a little roadside settlement, and were acting like the elephant was the most amazing thing ever...I don't blame them... 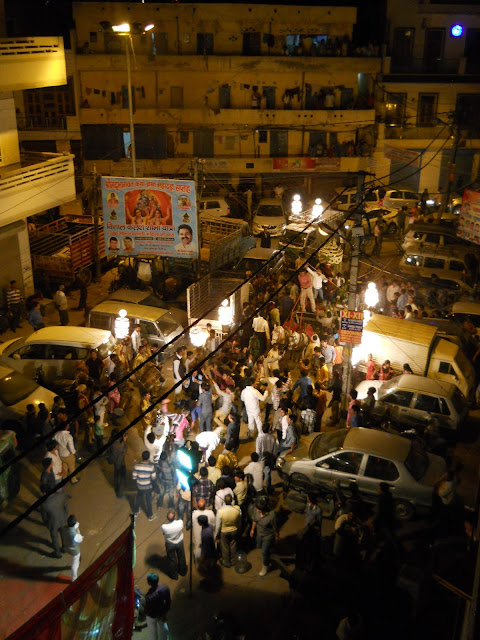 This pic is entirely unrelated, but later that day, there was a huge wedding right outside my girlfriend's flat. It's  kind of weird, really: They'll set up the marriage pandal right in the middle of the street...It'll be 9:30 at night and people will be shooting off fireworks and blaring songs like "Tera Pyaar Hookah Bar," and "Fevicol Se" as loud as they can.

Alright, that's all for now, though I'll have a new bloglett up in the next few days.