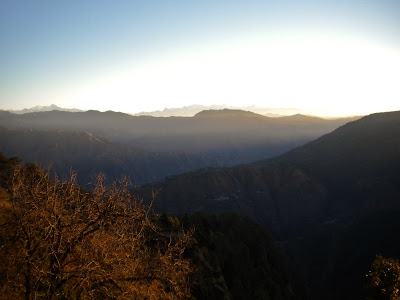 
Hi folks. So, right now I'm back in Delhi (in crusty old Pahar Ganj, in fact, the ultimate Hippy Hideout). But I'll post about that later. Basically, the main thing that's happened in my life is that I've started Hindi classes. And, well, it's a bit like space exploration: every question you answer just leads to ten thousand more, and the further you venture from the Earth, the more complex and confusing things become. So, it's going slowly. I think it's sill going to be some time before I'm really good at this. If I had the money, I would just stay here for a year and get 4 lessons a day, but, unfortunately that would bankrupt me.

But, anyway, this is what an average day is like: I take two lessons a day, and those are private lessons directly with the teacher. It's a bit expensive (at least by Indian standards), but when the teacher is good it's worth it. This last week my two teachers were Habib, Vo Mazidar Sufi Admi (that fun-loving sufi man), and Lalit Sharma, the Grammar Hammer, who's a really good teacher, though he's always chewing beetle nut.

And speaking of Hindi:

3: Unko Obama kay-sat kursi kharidni chahiye thi
(They should have bought a chair with Obama) 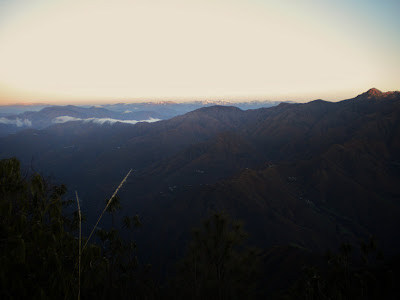 Other than Hindi, I've been doing a whole bunch of wandering around in the foothills, at least for the first week (the weather turned really crappy during the second week), in order to get myself into shape for my Mountaineering course in April.

But during the first week the snow ranges were visible most days. The sunrises we especially good (and looked much better than these pictures with my crappy camera). 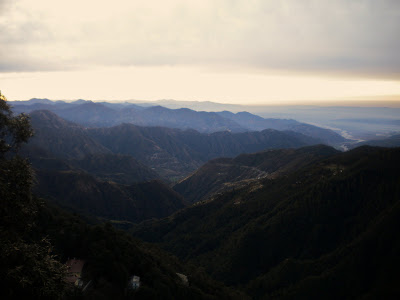 Dawn, looking south, from a water tower next to a supposedly haunted house 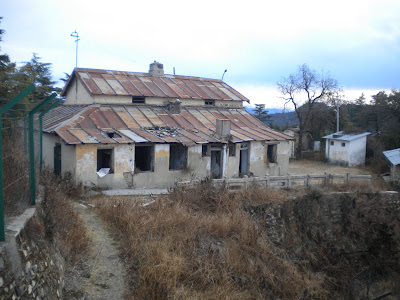 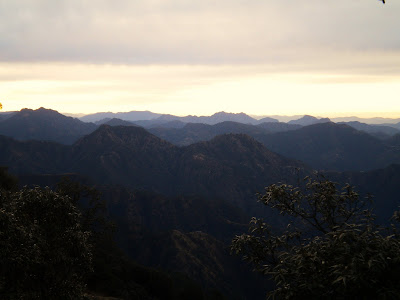 Anyway, my usual schedual during the first week was to get up at around 5 A.M., eat breakfast, go on a one and half hour walk, go to class, eat lunch, go on a three or four hour hike, eat dinner, go to bed (early). 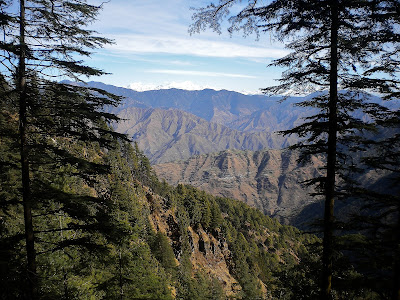 One of the reasons I really like this area is that now, having visited before, I know something about the (truly vast and endlessly complicated) trail network that leads down from Landor to the villages below. Landor itself is situated on the dominate feature of the landscape in this particular area (which is partially why the weather gets so crappy), and in order to get to the villages you have to walk down first, and then struggle back up. If you've ever been to the Grand Canyon, hiking here is kind of like hiking there, only about twice as steep and with way more Garwalis....

This area, by the way, is the Garwal Himilaya...this state, Uttarakhand, is separated into two parts: the Garwal Himilayas and Kumaon. As far as I can tell (and different sources give you wildly different answers), both Garwalis and Kumaoanis migrated here from west India (Rajasthan and the Punjab) relatively recently by Indian standards (as in, some time after 1180 or so) I've been told, at least in the case of the Garwalis, to escape invading Turks. They were Rajputs and Brahmans, though they imposed themselves over a much older group of people, the original inhabitants of the region, called the Khasas, who were a wide ranging Indo-aryan group, after whom, for example, the city of Kashgar in modern day Xinjaing province and the Kashmir valley are named. When I first started bumping into Garwalis down in the villages, they struck me as looking way more like Afghans than like other Indians. In fact, if you're in Delhi or somwhere like that, you can usually pick out the Garwalis because they have this quite pronounced, almost super-Caucasian look (which sounds kind of terrible, but it's really the only term that will fit.) But then, at the same time, in some villages, you'll also come across people with very Asian features... even though Gawalis are in thier origin quite the Uber aryans, they've been mixing with Nepalis for quite some time (a good for them!)...actually, in the remote higher regions of Uttarakhand, getting on towards Tibet, there are still a number of groups who speak Tibeto-Burman languages, so Garwalis have probably been mixing with them as well....but I digress 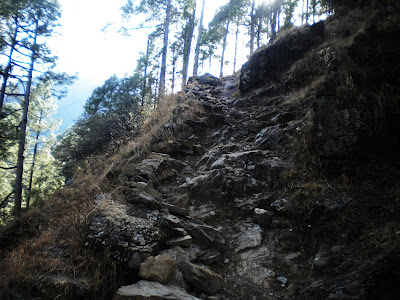 A representative stretch of the Kurukshetra Trail

Anyway, up above is a stretch of what I call the Kurukshetra Trail (Kurukshetra being the place where the war in the Mahabarata was fought..the term has now come to mean a great struggle). But the trail itself is maybe the steepest I have ever been on. It was built to service a series of pump-stations that bring water up from a small stream below. But from the top, at about 7000 feet, it descends from an old creepy crumbling British graveyard dating from, I believe, the 1780s, and descends to about 5000 feet, passing through four different kinds of forest on the way....you start in the Deodar woods, pass down through a different kind of pine forest, and then Rhododendron forest, and then wind up in this sort of very very tropical vegetation which, in this part of India, you only have in the narrow ravines that little mountain streams have carved out. It makes me wish I knew more about botany.... 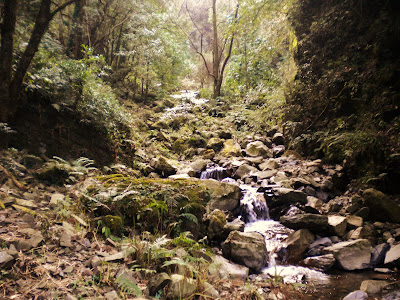 But the ravines are maybe my favorite things to hike to in this region: the views are great, and the woods are nice, but everywhere in the Garwals you get this sense of the natural environment being distressed.....trees usually have limbs missing, and when you look out over the mountains you can see places where thousands and thousands of feet of mountain slopes have been totally denuded of vegetation (though things are evidently improving on that score....more on that later)..but down in the ravines, which sometimes are actually more like small canyons, the ground is so rugged that the area has been relatively untouched, so that it probably looks now like it did hundreds or thousands of years ago. I think H.P. Lovecraft would have found them "Crepuscular, like some shady half-forgotten noisome memory of a place of eldritch horrors." And I would agree with with him. Also, they tend to have waterfalls in them, which are always nice. On this particular hike, I was trying to go down and visit one I had discovered last year. 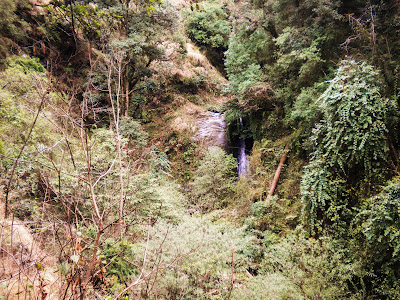 View towards the waterfall

It's no east task getting down to places like this, and all the times I've gone down to the villages and to the valleys, I've only once seen another white person (and she was near the top). But that's one of the things which draws me to these areas....I may well be the only American to have ever been to them. 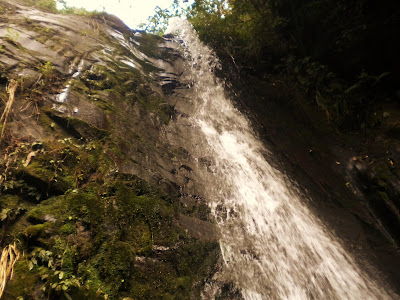 Looking directly up at the falls

Again, my camera isn't that great. In the picture above it makes the falls look pretty small, when in actuality they're about 25ft high. 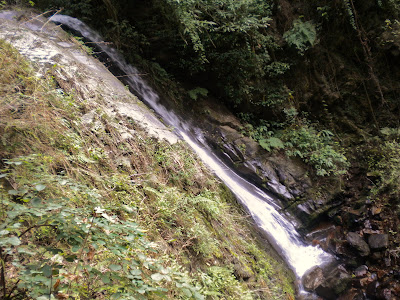 Though this area is not frequently visited, herders, probably from the village Kimoi, do seem to occasionally go up there from time to time, so there is a faint trail which leads up over the first falls, and into the ravine beyond, where the walls close in and the watercourse gets steeper and steeper. But there a a bunch of little waterfalls, and then one more medium sized one, before the stream gets lost in the rocks. 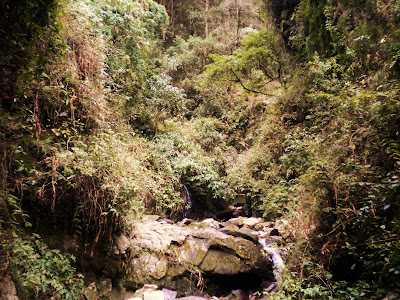 That's as far as I went that day, as the sky was looking a little cloudy, and I wouldn't want to be down in there in the rain.

So, that's all for now, though will hopefully have a third post soon...of course, I miss everybody, except Brian.